Home » BC Drops Two of Three at Wake Forest, Give Up 35 Combined Runs in Losses 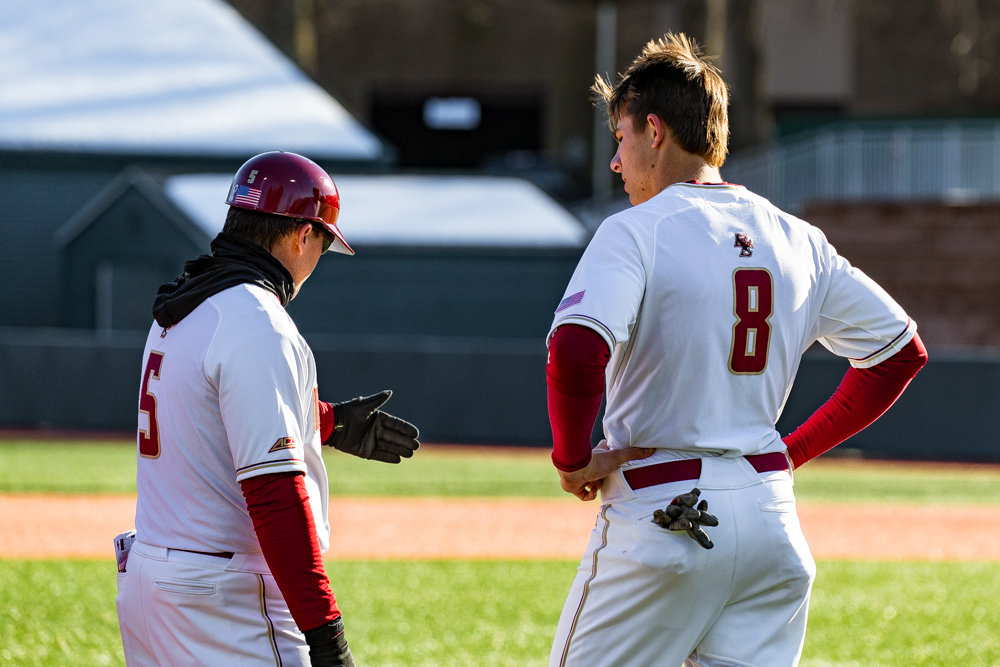 BC Drops Two of Three at Wake Forest, Give Up 35 Combined Runs in Losses

Entering Saturday, Boston College baseball had put together an encouraging three-game win streak. The run included a victory to close out the series against No. 8 Louisville, a decisive home opener against Holy Cross, and a masterful pitching performance by Dan Metzdorf to take the first of three games in Winston-Salem against Wake Forest, 5-3.

However, Wake Forest’s bats had something else to say in the weekend’s final two games, in which the Demon Deacons crossed home plate 35 times, including a 13-run fifth inning on Saturday afternoon that led to a 22-9 victory. The dismal frame that would prove to shift momentum to the home bench for the rest of the series saw 17 batters, six walks, a grand slam, and four BC pitchers, all in the span of 44 painstaking minutes. Wake Forest carried its confidence at the plate into Sunday’s rubber match, defeating the Eagles, 13-3.

Wake Forest (12-9, 3-3 Atlantic Coast) was clicking on all cylinders on Sunday afternoon, but BC (10-8, 2-4) was able to fire the opening salvo in the top half of the first inning. Chris Galland and Sal Frelick opened the game up with a pair of hard singles off Demon Deacons starter Morgan McSweeney, and Brian Dempsey brought in Galland on a sacrifice fly. BC could not capitalize for another run in the frame, though, stranding two runners on the bases.

BC righthander Mason Pelio picked up where he left off from his dominating performance against Louisville in the early going on Sunday. The 6-foot-4 freshman gave up a seeing-eye single to Michael Turconi to start the game, but erased the next eight Demon Deacons, en route to a scoreless first three innings. Pelio was overpowering the Wake Forest hitters, locating his low-90s fastball up in the zone to force batters to harmlessly pop the ball up.

Unfortunately for the Eagles, Pelio’s control deserted him in the fourth. He issued three walks in the inning, and with the bases loaded, Chris Lanzilli tomahawked an 0-2 high fastball the opposite way for the Demon Deacons’ second grand slam of the weekend. Pelio was pulled after the frame, and Joey Walsh and Thomas Lane also struggled in relief. Walsh surrendered six hits and five runs in an inning and a third, and Lane walked two in his two-thirds of an inning. Lanzilli added three more RBIs in the next two innings, making it a 10-run middle third of the game for Wake Forest.

The Eagles’ bats remained silent for the rest of the contest, with the exception of a two-run triple from Cody Morissette in the sixth. Any hope of a comeback was squashed in the bottom of the eighth, though, when Lanzilli added to his career day at the plate with a three-run homer to give him 10 RBIs on the afternoon.

Despite the tilted final scoreline, BC came out in control on Saturday afternoon as well. The Eagles took advantage of sloppy defense from Wake Forest in the top half of the first to strike for four runs. Frelick lined a hard single that was misplayed by right fielder Christian Long to advance him to second. Dempsey attempted to bunt him over the third, but reached himself when the sacrifice was booted by starting pitcher Jared Schuster. Jake Alu and Jack Cunningham each followed with RBI singles, and Gian Martellini kept the line moving by shooting a double into the left-center gap that plated two more.

The quick four-run lead seemed to be what BC starter Matt Gill needed to pitch comfortably early on. With the exception of a leadoff walk to Turconi, the big righty retired the first 10 batters of the contest. Gill’s first adversity came in the fourth, where a walk set the stage for a two-run home run by Bobby Seymour, who took an outside pitch the other way over the left-center wall.

After tacking on another run to make it 5-2, Gill stepped onto the mound for the fifth inning. A walk, a hit by pitch, and two singles cut the lead to two when Patrick Frick walked up to the batter’s box with the bases loaded and one out. On the first pitch of the at-bat, Frick sent a high fly ball into foul territory on the right field side. Frelick appeared in position to track the ball down and make the catch, but instead, the freshman let the ball drop in foul territory to prevent a run from scoring on a sacrifice fly.

It was a gutsy decision that could have worked had Frick grounded into a double play on the next pitch, but the choice proved disastrous for BC. Three pitches after the “no-catch,” Frick took a big swing at a fastball, and sent it high over Frelick’s head for a grand slam. After Frick’s blast, the next 10 Demon Deacons all reached base, including five on walks. More concerning for the Eagles, four of the five free passes came on four pitches, as the command of BC’s bullpen imploded to allow 12 earned runs in the final four innings of Saturday’s contest.

Despite Saturday’s poor performance, BC’s pitching staff was dominant on Friday night. Metzdorf, who pitched well but was outdueled by Louisville ace Reid Detmers the Friday before, kept the Demon Deacons off balance all night. He scattered seven hits and four walks in five and a third innings, but got pivotal outs with men on base, especially with the punchout. The senior lefty, and Friday’s winning pitcher, struck out six and allowed just one run, maintaining a stellar earned run average of 1.06 to start the year.

BC built up its five runs over the course of the middle innings, highlighted by a towering opposite field blast by Cunningham. Wake Forest’s defensive struggles were put on display, as three errors led to a pair of unearned runs charged to Demon Deacons starter Colin Peluse.

Protecting a lead in the late-innings, the Eagles held down the powerful Wake Forest offense. With the bases loaded and one out in the sixth, Lane entered the game and struck out D.J. Poteet on three pitches, then forced Frick to fly out to end the threat. Lane stayed on for the seventh and retired five of the six batters he faced. Eagles closer John Witkowski gave up two runs in the eighth, but with the tying run at the plate in the ninth the senior delivered, punching out Shane Muntz and securing the save and the victory.

Now six games into its conference slate, BC has shown flashes of being a complete team. The offense is finding its way, but the fact remains that the Eagles will need more consistent pitching to be successful. They boast a 5-0 record when allowing three runs or less, compared to a 5-8 record when surrendering four or more. BC will get to come home for its first conference series of the season against Clemson next weekend, preceded by midweek tilts with Northeastern and Siena. Having played just one of its first 18 games in Brighton, the week looks like a good opportunity for Mike Gambino’s squad to get right.