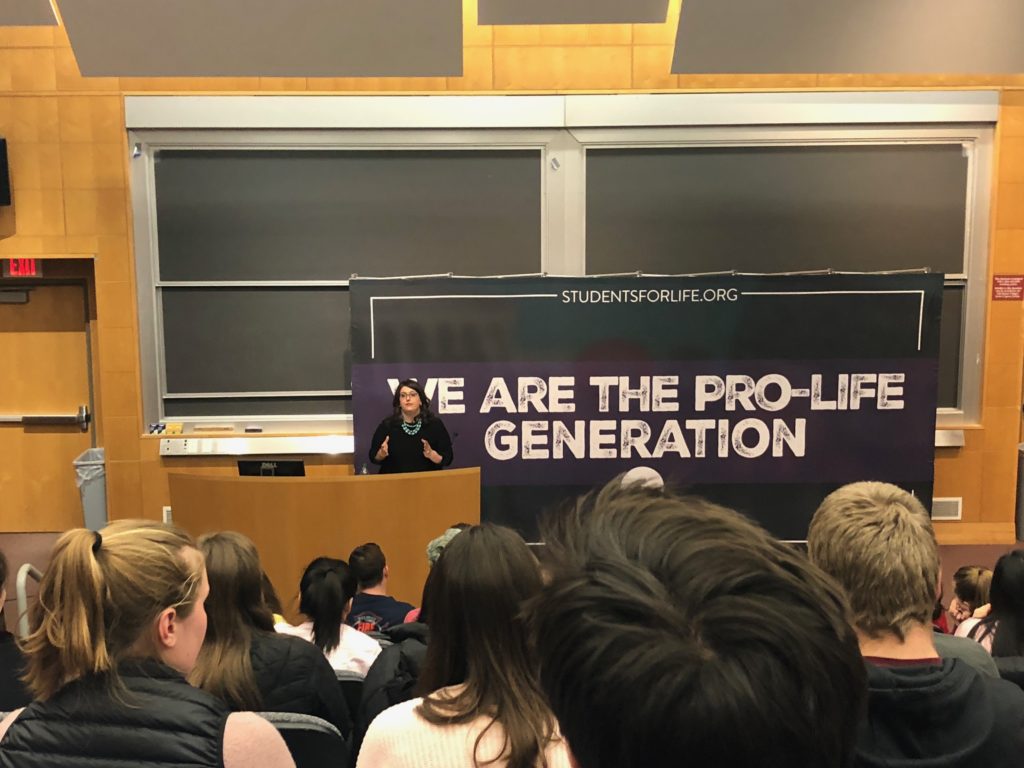 Boston College’s Pro-Life Club held an event titled “Lies Feminists Tell with Kristan Hawkins” Tuesday night, with tensions reaching a high point during the question-and-answer section of the event. Hawkins, the president of Students for Life of America, gave a talk breaking down her beliefs about the intersection between what she describes as “mainstream feminism” and the issue of abortion—concentrating on her disagreements with “mainstream feminism’s” sentiments.

Around 150 students, including members of the Pro-Life Club, advocates for abortion rights, and groups of interested students attended the event in Higgins 300. Some arrived as early as 6:45 p.m., despite the event being scheduled to start at 7:30 p.m.

Organized by the Pro-Life Club, the proceedings have been the subject of widespread debate and controversy on campus. Many of the marketing posters for the event were taken from Office of Student Involvement-approved locations while students organized a “protest” through Facebook. Organizers have refrained from calling it a protest, since it is neither University-sanctioned nor is it intended to function as a protest in the classic sense. Instead, Hollie Watts, the page’s founder and MCAS ’21, encouraged students to voice their opinions during the question-and-answer session.

Students, aware that there was no registered protest—which left attendees up to disciplinary measures for disruption—largely arrived only if they had obtained tickets. There was very little disruption before or after the event beyond confusion over where students without tickets could stand.

Dean of Students Tom Mogan changed the event to require that attendees pick up a free ticket beforehand after Watts’ Facebook event caught the attention of his office. Members of the Pro-Life Club had an opportunity to register for tickets before anyone else, although a majority of tickets went to the general public, according to Bianca Passero, president of the Pro-Life Club and Lynch ’19.

“I’m here today because I came to a Catholic School,” Emma Foley, a member of the Pro-Life club and CSOM ’22, said before doors opened. “I feel like it’s really important that we support Catholic values, and we support every child in the womb—from the moment of conception—because they are a person, and God gave them DNA, and their DNA is like no one else’s.”

Many who came to support Hawkins recalled the role their Catholic faith played in their worldview. One group explained that they find it difficult to find the space to describe their views and start open dialogues in day-to-day life, although admitted that BC was less to the left on the issue than other campuses.

On the other hand, Christian Ramirez, co-chair of the GLBTQ+ Leadership Council (GLC) in the Undergraduate Government of Boston College and MCAS ’19, said that anti-abortion activism gets more attention from the University than other issues.

“For example, GLC is holding a prom later this year and we are not allowed to call it … anything to do with GLC or queerness,” Ramirez said. “We are also not allowed to have our logo on the flier, while [at] this event, they can be very outspoken about their beliefs.”

Attendance was not limited to the BC community—Hawkins attracted several locals and a handful of students from neighboring colleges. Dorothea Jacobson and Anne Long, two self-described “anti-abortion conservatives,” heard about the event through a fundraising email sent by Hawkins on Thursday.

In her email, which was obtained by The Heights, Hawkins asked for donations to fund private security, explaining, “my team is looking into hiring security guards. As you can imagine, hiring private security isn’t going to be cheap. But my staff tells me I’d be crazy not to.”

Boston College Police Department Chief Bill Evans told The Heights that he did not expect any security problems.

After students with tickets had been admitted, a BCPD officer and several BC officials asked that students without tickets exit the hallway and either disperse or remain in the entranceway of Higgins Hall. One of the students explained that she had been told that remaining directly outside the room was a threat to safety and security. The group was allowed back into the hallway shortly afterward.

Despite tickets selling out, not all seats in the auditorium were filled.

Hawkins opened her talk by explaining that her lifestyle—in which she is the primary wage earner in her family—aligns with the ideals of first and second-wave feminism. In college, she would have definitely referred to herself as a feminist, according to Hawkins, but she noted today’s mainstream feminist movement wouldn’t want her to consider herself that way.

“Why? Over one issue,” she said before pulling out a model fetus. “Because I believe that this child has rights.”

Hawkins used a fake needle to demonstrate a “heart attack abortion”: She showed how the needle is inserted into the mother’s stomach, pierces the heart of the fetus, and inserts digoxin into its heart, causing a heart attack.

“This is how late-term abortions are committed in our country,” she said. “We induce heart attacks on children, and then two days later, we hope that the child has died. … I’m not welcome into today’s feminist movement because I believe this is a human rights violation.”

Hawkins delved into the “five lies” she believes feminists tell—the first being that sex doesn’t have consequences. Hawkins argued that there are natural consequences of sex, and they range from small inconveniences to the creation of human beings.

Hawkins argued that over the years, the nature of sex has changed to be something that happens outside of a lifelong commitment. When this happened, Hawkins argued, women were sold the second “lie”: Contraception is necessary for the advancement of women.

Hawkins said that many within the first wave of feminists spoke out against the use of contraceptives because they believed that it allowed men to use women’s bodies for pleasure and then demand later that they take care of their pregnancy with an abortion.

“I know a lot of women who’ve had that abortion because their boyfriend told them just to ‘get it taken care of’ and handed them the $350,” Hawkins said.

Hawkins said that contraceptives could be ineffective, citing a statistic from the Guttmacher Institute that says about half of women who procure abortions in the United States do so after failed contraceptive methods. She also said that they could be dangerous, increasing women’s risks of breast cancer and suicide.

“I reject that fact that I have to take carcinogenic drugs for decades to prohibit a natural function of my body in order to be equal to my husband, to be equal to men,” Hawkins said. “That’s crazy.”

The third “lie” that feminists tell, Hawkins said, is that women need abortion to achieve their goals. Hawkins said that the abortion debate should be about whether abortion kills, but mainstream feminists say that it is about women’s freedom. For a woman with an unexpected pregnancy, Hawkins said, the subtext of the feminist mantra “your body, your choice” is “have the abortion.”

The fourth “lie,” according to Hawkins, is that abortion is safe and harmless. Researchers in Finland, a country where abortion is not controversial, Hawkins said, found that the suicide rate for women who had had an abortion was three times higher than it was for those who had not. There are also numerous studies linking women who are post-abortive to higher rates of drug and alcohol abuse, PTSD, and Placenta Previa, according to Hawkins. The Heights was unable to find research that corroborated this.

Hawkins then brought up the Equal Rights Amendment (ERA), saying the final “lie” that feminists tell is that the ERA is going to help make women equal to men. The amendment was three states short of being ratified in 1982, but in the meantime Americans have passed laws that made sure women were treated fairly in the workplace and in education, Hawkins said.

Section one of the ERA says that “equality of rights under the law shall not be denied or abridged by the United States or by any State on account of sex.”

Hawkins noted that in Supreme Court Justice Ruth Bader Ginsburg’s book Sex Bias in the US Code, she argued that the ERA would invalidate 800 laws that had been created to protect women, because the ERA would make it illegal to protect any one gender over the other.

“[Today] there are people who are saying we need to pass the ERA. Why? Because the abortion industry, the abortion movement, is very scared that Roe v. Wade is going to be overturned very soon … and the decision of abortion will come back to the state,” Hawkins said. “They want to make sure abortion is cemented in the Constitution.”

After just over an hour, organizers invited audience members to ask Hawkins questions, but requested that they keep themselves to 30 seconds or less—a limit that was often ignored as both parties engaged in back-and-forth dialogues.

The first audience member questioned Hawkins’ use of the phrase “pro-abortion,” which “would not necessarily be how people would describe themselves.”

Hawkins first explained that she simply sees the two camps as “pro-legal abortion” or “anti-legal abortion.” She said that many abortion rights activists say that they are “pro-abortion ‘like [they] are pro-knee replacement or pro-chemotherapy.’”

“I think you need to own it,” Hawkins said. “This is what has been so effective in the abortion industry today: the semantics of saying ‘pro-choice.’ If abortion is so good, then own the damn word.”

Next, an audience member asked about contraceptives, Hawkins’ connections to the Trump administration, health care, and Hawkins’ children—two of whom have Cystic Fibrosis. At one point, Hawkins interrupted the speaker, asking if a question was coming, leading to a tense exchange in which each spoke over the other and Hawkins invoked the 30-second rule.

Other questions challenged Hawkins on her compassion toward the lives of refugees and migrants and the efficacy of making abortion illegal in an increasingly sex-positive society, or in cases of rape or incest.

“If you’re saying ‘I’m proudly on birth control but I’m just not ready to be a parent,’ I think that means the question is ‘are you ready to be in a sexual relationship?’” Hawkins said, which prompted an audience member to ask if she had ever had an orgasm.

“This is the level of conversation we have,” Hawkins replied, referring to the discourse that often surrounds the topic of abortion.

The penultimate question again probed Hawkins’ thoughts on abortion in cases of rape and incest. Hawkins countered with a question of her own, asking if it was justified to kill a toddler who had been conceived from rape, arguing that she didn’t see a distinction between the two cases.

The final question was also the only one that didn’t contest Hawkins’ beliefs: The student asked Hawkins how she stayed positive amid all the disrespect and negativity aimed at her. Hawkins said that it comes from a personal conviction—if abortions happened on the street corner or the evening news showed the bodies of the fetuses that had been aborted that day, she said, a lot of people would feel differently about the issue.

“I’ve seen the science, I’ve met the victims of abortion … and I want to win, I want to bring this home,” Hawkins said. “And I’m not going to stop.”

Hawkins ended the talk with a supportive message from her husband, who had watched the livestream.

“My husband just texted me and told me to go ahead and tell you, ‘Yes, I’ve had many orgasms,’” Hawkins said.

Correction (3/20/19, 1:05 p.m.): This article previously cited Hawkins as identifying with second and third-wave feminism, rather than first and second-wave feminism.