A horde of people crowded along the bar and felt the madness of March as they watched the competitive Florida Vs. Nevada opening round basketball game. While Nevada edged within three points with four minutes remaining, June Bloom, the band scheduled to open that night, warmed up its dreamy guitar and psychedelic synthesizer. The hypnotized audience turned their heads in unison from the television to the far stage and migrated over to the enchanting sounds.

WZBC hosted their spring concert on Thursday night at the Great Scott, an Allston bar and music venue. The premier student-run radio station of Boston College put together a lineup of underground rock artists—consisting of June Bloom, Nemes, and Signals Midwest—that made for a lively night of music.

Patrick Carr, the keyboardist and vocalist behind June Bloom, beckoned bar-goers to join him as the auditorium flooded with people. The band opened with its most popular song, “Ponds,” off its recent debut EP album Bloomin’. It settled the swarm in with its warm, lo-fi vibe that made the wide sea of heads smoothly sway from left to right. June Bloom continued to charm with dream-pop tunes, while also throwing in a cover of MGMT’s “Time to Pretend” that made the audience, composed mostly of college students, scream out the lyrics of the song that held a top spot in their high-school playlists.

Unlike the mellowness of June Bloom, Nemes followed up with a set that burst my eardrums and my expectations. Frontmen Josh Knowles—with his amplified fiddle—and Dave Anthony—with his mysterious, transparent guitar—led the energetic group. Knowles went to town on what sounded more like some profound, alien Fender than a violin. The band reached moments of exhilarating intensity that had the crowd shaking their heads up and down in delight. These peaks were during Knowles’s iconic fiddle solos, his passionate screaming into the microphone, and Anthony’s flip of the switch on his guitar that illuminated the bright LEDs within their hollow glass bodies.

Signals Midwest lacked the magical synthesizer of June Bloom and the wild fiddle shredding of Nemes, but managed to maintain the concert’s high energy. The group kept it fresh by bringing its indie take on a Green Day sound to stage. It played punk songs plucked from their three albums, 2016’s At This Age being their most recent. Its edgy, upbeat sound and strong chemistry kept listeners wide awake as the night came to a close.

On the night of March 21, Great Scott’s was the place to be. WZBC’s spring concert included an intriguing variety of bands that excelled in mesmerizing audiences, each in their own unique way. June Bloom made them melt. Nemes shook them to their core. Signals Midwest encouraged them to stick up their devil horn hand gestures and rock on. On top of that, the intermission time between the animated shows could be spent learning more about BC’s premier student-run radio station from its members or checking if your perfect March Madness bracket remained intact. 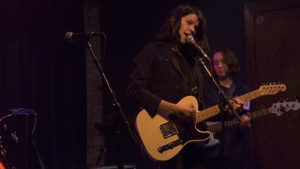