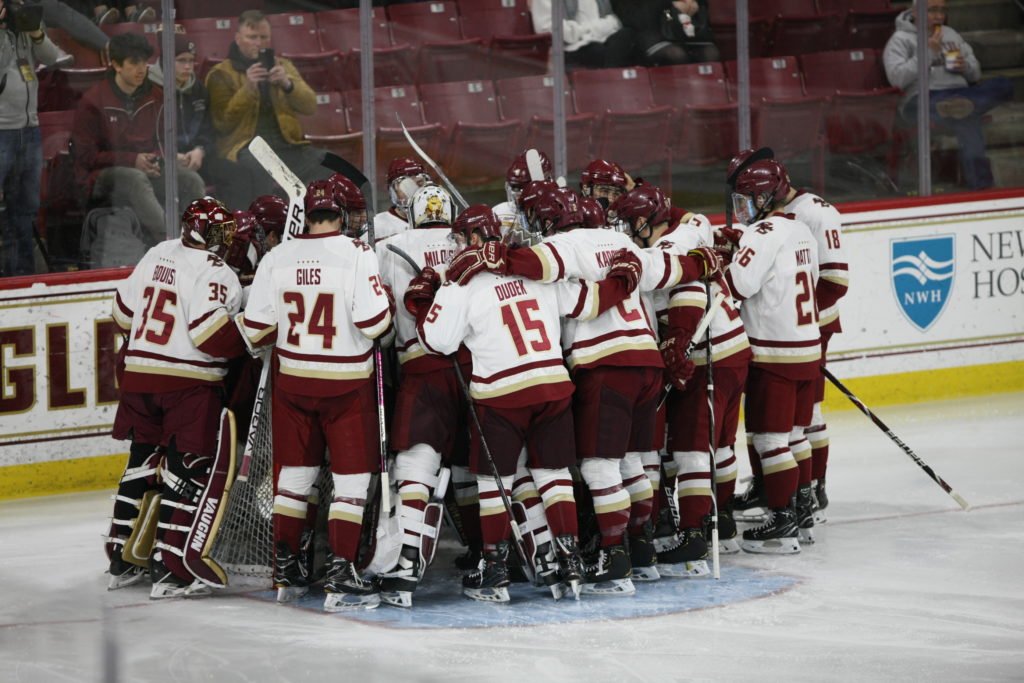 Boston College men’s hockey saw its season end one game short of the NCAA Tournament just a few days ago, but its name has still been popping up in the news since, due to a number of notable roster changes. We’ll keep track of all of them in our departure tracker below and will continue to update as more players choose to leave the Heights or stay for another year. So as of right now, here’s what we know about which players are moving on from Chestnut Hill.

Michael Kim and Christopher Brown: Signed With the Wilkes-Barre/Scranton Penguins

Two of BC’s senior captains are sticking together after graduation, as Michael Kim and Christopher Brown both signed amateur tryout contracts with the Wilkes-Barre/Scranton Penguins for the remainder of the 2018-19 season. Brown finished his Eagles career with 151 games played, making him just the 46th player in program history to reach that mark. Kim—who led all BC defenders with 15 points this season—also has signed an AHL contract with the Penguins for the 2019-20 campaign, according to a release from the Penguins organization.

The Eagles’ other captain, Casey Fitzgerald, signed with the team that originally drafted him in the third round of the 2016 NHL Entry Draft: the Sabres. The defenseman has agreed to a two-year entry-level deal that will begin at the start of the 2019-20 season, and he will initially report to the AHL’s Rochester Americans. Fitzgerald finished the season with 14 points—the second most among BC defensemen in 2018-19.

In a press release from the AHL affiliate of the New Jersey Devils, it was announced that Dudek will join the team on an amateur tryout contract, the length of which is not clear at the moment. The senior finished his Eagles career with 56 points in 149 career games played.

After days of speculation regarding Oliver Wahlstrom’s future, it was finally announced in a press release that the No. 11 overall pick in the 2018 NHL Draft had signed a three-year entry-level contract with the Islanders, the team that drafted him last year. The contract will begin at the start of the 2019-20 season. The Quincy, Mass., native becomes the second early departure for the Eagles after it was announced that Joseph Woll had signed an entry-level contract with the Maple Leafs. He leaves after a largely underwhelming rookie season that saw him notch just 19 points in 36 games.

Woll was the first departure to be reported by the Eagles, as the junior goalkeeper signed an entry-level contract with the Maple Leafs just a day after BC lost the Hockey East final to Northeastern. The former third-round draft pick finishes his Eagles career with a record of 47-45-8, and a 2.51 goals-against average.

Who could leave early but is possibly coming back

The junior enjoyed a fantastic campaign, pacing BC with 23 goals—a mark that led Hockey East. That led to some speculation that the Eagles could be losing him to the Carolina Hurricanes, who selected him in the sixth round of the 2015 NHL entry draft. A report from the Boston Globe, however, suggested that Cotton does in fact intend to stay with the Eagles for his senior season. That could be huge for a team that will likely be lacking experience next season.

This story will be updated as more players and teams make decisions.