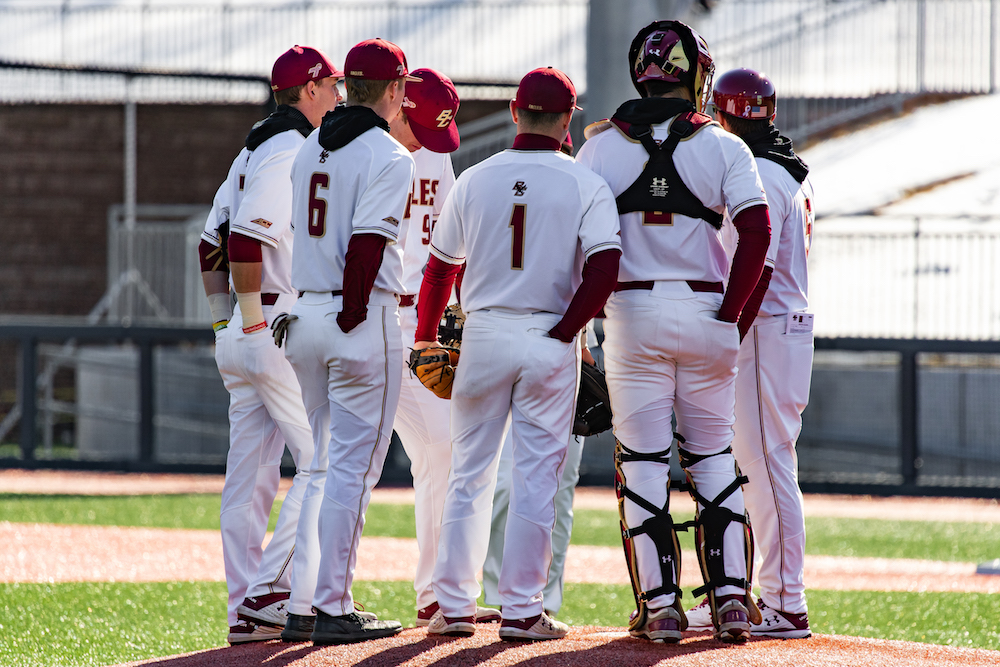 After dropping the first two games of its weekend series to Clemson, Boston College baseball fell to .500 for the first time all season. Following a Sunday victory against the Tigers, the Eagles needed a win over a streaking Connecticut team on Wednesday to stay above the .500 threshold. The Huskies entered having been playing their best baseball as of late, boasting wins in seven of their last nine games—a run that has been highlighted by stellar pitching. The UConn pitching staff had allowed no more than four runs in eight straight contest, and it extended that streak to nine in defeating the Eagles, 3-1.

Colby Dunlop, getting the midweek start on the mound for the Huskies (15-8), delivered a more than effective outing. The righthander earned the win, tossing five innings of one-run ball and scattering six hits. The Eagles (13-13, 3-6 Atlantic Coast) were putting the ball in play—Dunlop had just one strikeout—but he kept BC off balance, especially low in the zone, forcing six groundouts on the afternoon.

UConn’s offense struck early off of Eagles’ starter Joe Mancini, who was making his fourth start of the season. Michael Woodworth led off with a triple, followed by an Anthony Prato double that plated the first run, just two batters into the game. Prato was moved to third and then came home on a pair of fly balls, as Mancini settled down to retire the next three hitters and end the threat. It could’ve been much worse, as Mancini needed a herculean effort from Sal Frelick—the freshman center fielder went to the fence and brought back a potential two-run home run off the bat of John Toppa. Still, the early burst from UConn would prove too much for BC’s offense to match.

The Eagles’ biggest threat came just minutes after in the top of the second frame. Jack Cunningham led off with a single, and Cody Morissette followed suit, moving Cunningham into scoring position. After a Lucas Stalman fly ball moved him to third, Cunningham came home to score on a Dunlop throwing error. The unearned run was the only one the Eagles would manufacture for the next seven innings, though.

Mancini bounced back with a one-two-three second inning, but then gave way for Matt Gill in the third. The Saturday starter, who has struggled early on this season, set the Huskies down in order, making quick work of the frame, but UConn struck for its third run in the bottom of the fourth. Gill gave up an opposite field single to Christian Fedko, who was moved to second via a fielder’s choice. With two outs, the senior could not get out of trouble, surrendering a single to Thad Phillips, doubling the Huskies’ lead.

The Eagles’ best chance to put runs on the board came in the fourth inning, where they were able to string three consecutive hits together. Aggressive baserunning, however—which has put BC in position to score more runs all season—came back to bite them. Brian Dempsey opened the inning with a hit into the right field gap. Dempsey attempted to turn the single into a double, but was gunned down at second. Cunningham followed up with his second single of the contest, yet was immediately caught stealing. Gian Martellini followed with a single that could have been the start of a big inning, but instead ended up being a harmless two-out hit with no runners on.

Both bullpens were on fire from the fifth inning on. For the Eagles, Travis Lane came on with two outs in the fifth and pitched 2 1/3 scoreless frames. The younger Lane brother gave way for his older brother Thomas in the eighth, who combined with Joey Walsh to put up a zero in the frame. After Gill, the aforementioned trio and Sean Hughes teamed up to pitch four scoreless innings, giving up just three hits and striking out four. Frelick again played a key role in keeping the Huskies off the board, throwing out Chris Winkel—who was trying to stretch a double to a triple—in the sixth.

It wasn’t any easier for the Eagles, though, as the UConn pitching staff seemed to be gaining confidence with each passing inning. After the three-hit fourth, BC tallied just two hits in the last five innings. The bullpen combo of Caleb Wurster, C.J. Dandeneau, and Jacob Wallace strung together four nearly flawless innings, allowing a single hit to go with five punchouts. Wallace, the Huskies’ closer, has been automatic this season, recording his seventh save of the year while lowering his ERA to a microscopic 0.56.

The road does not get easier for the Eagles ahead. They match up with No. 20 Florida State in Tallahassee for a three-game series, the first of which begins less than 48 hours from the conclusion of Wednesday’s contest. While hitting has been this team’s strength all season, the Eagles have been struggling offensively recently, scoring only 10 runs in their last four games after averaging over six runs per game before the cold stretch. Head coach Mike Gambino’s squad will need to be locked in at the plate and on the mound to compete with a tough Seminoles team, which enters fourth in the conference in scoring and boasts plenty of power—FSU leads the ACC with 36 long balls.