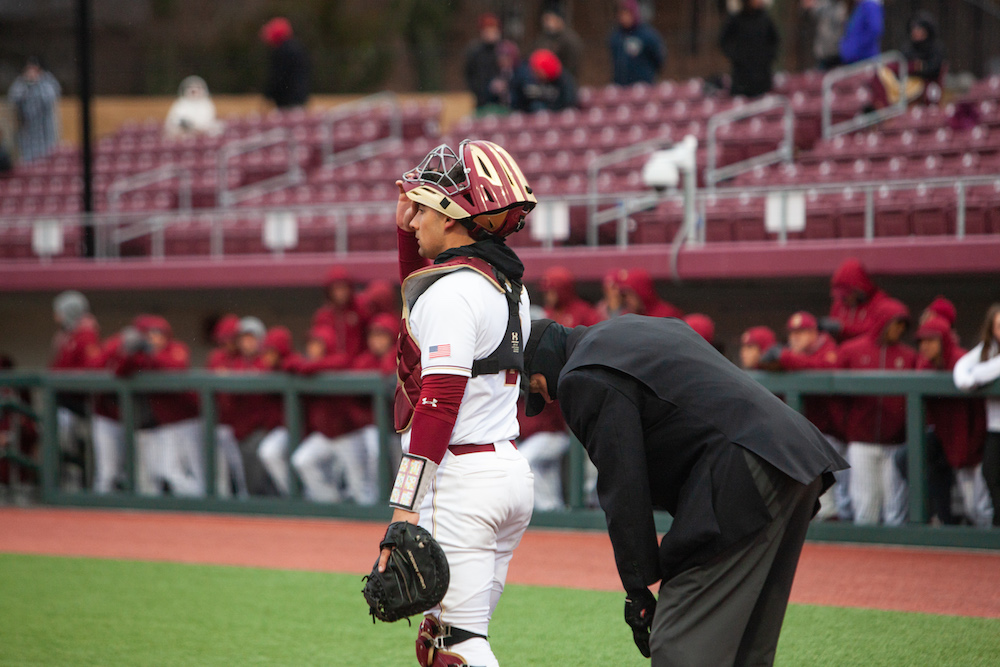 Boston College baseball was coming off of its most encouraging weekend of the season as its first ACC series victory—against No. 21 Florida State, nonetheless—made it seem like the Eagles were turning the corner toward a winning stretch of games. Head Mike Gambino’s squad was once again over .500, and they were coming back home to play 10 straight games in Brighton.

The last two games, though, brought the Eagles back down to earth.

After a loss in the first round of the Beanpot against slumping UMass, BC looked to regain its confidence against a similarly struggling Hartford team. But the Hawks stole the show on Wednesday, as Chris Sullivan pounded a two-run home run, and Jackson Olson had three hits that powered the Hartford offense to a 7-4 victory. BC (14-15, 5-7 Atlantic Coast) tallied 13 hits but left nine men on as it came up short on Wednesday.

“When we play the game the way that we want to play it, we’re a really good team,” Gambino said. “When we get away from that and start letting our focus get onto other things―opponents, external things―we’re just okay.”

Hartford’s (9-14) offense was started up right away when Donnie Cohoon led off with a double that flew over the head of right fielder Lucas Stalman. Zachary Ardito followed up with an RBI single into the left-center gap, and three-hitter Sullivan followed by driving an outside fastball the other way over the left field fence, giving the Hawks a three-run lead before BC starter Jack Nelson recorded an out. Nelson settled in to retire the next eight batters, three of which came via strikeout.

BC clawed back in the bottom of the second, where a pair of two-out singles by Stalman and Ramon Jimenez set the stage for Chris Galland. The sophomore left fielder hit a soft ground ball up the middle that drew the shortstop Olson to his left. Galland beat the play out at first, and Stalman aggressively rounded third and slid in just ahead of the throw to home, getting the Eagles on the board.

BC threatened again in the third inning, where back-to-back hard singles by Jake Alu and Jack Cunningham brough Gian Martellini into the batter’s box. The senior took the first three pitches for balls and was given the green light on 3-0, and he took advantage with a hard single that brought in the Eagles’ second run. BC, however, went down in order after Martellini’s hit, stranding two on the basepaths for the second consecutive inning.

The Hawks immediately answered, loading the bases with an error and two singles with no outs. Nelson buckled down, though, and induced a weak popup, recorded another strikeout and forced Cohoon to pop up in foul territory to end the threat—and his afternoon. The senior, making just his third appearance and first start on the season, really settled in after the early adversity of the first three batters, allowing just three more hits, striking out four, and walking none.

BC took advantage of a pair of costly errors to tie the game in the fifth. Jimenez singled to lead off the inning before being replaced on the bases by Galland on a fielder’s choice. The speedster’s constant base-stealing threat drew an errant pickoff throw from Hartford starter James Judenis that moved him to scoring position. Brian Dempsey reached on a throwing error, which spelled the end of Judenis’ day. Alu brought home Galland on a safety squeeze to tie the game at three. Peter Myers, who relieved Judenis, stayed on to pitch 2 2/3 innings of one-run ball and would eventually become the game’s winning pitcher.

Joe Mancini worked the fifth and sixth for BC, and Hartford was able to further build a lead with a run in each inning thanks to extra base hits. In the fifth frame, an Ashton Bardzell double was followed by an Olson triple to plate the Hawks’ fourth run. In the sixth, it was back-to-back doubles down the right field line by Robert Carmody and Bryce Ramsey to double the Hartford lead. Mancini was able to limit the damage, though, stranding a runner in scoring position in each inning.

Jimenez cut the lead in half with a towering home run to dead center on a first-pitch fastball in the sixth inning. Making just his second start of the season, the freshman from Chicopee, Mass., went 3-for-4 as the designated hitter, including his first collegiate big fly.

“He was great today,” Gambino said of Jimenez’s day at the plate. “The kid’s been really working hard, and it’s awesome when you see a kid work that hard and be ready when his name is called.”

Jimenez’s shot in the sixth would be the last time the Eagles would put runs on the board, though. They scattered four hits over the remaining four innings, but the Hartford bullpen combo of Jake Regula, Jason Johndrow, and Will Nowak combined for three scoreless innings and three strikeouts. Hartford tacked on two insurance runs in the top of the ninth after loading the bases with an error and two singles. Devin Kellogg delivered with a two-RBI single that secured the result for the Hawks.

The road gets much tougher for BC, as No. 3 North Carolina State will come to Brighton for a three-game weekend series. BC will need a complete team effort to take down the Wolfpack while taking advantage of every opportunity it can. The team has very much played to the level of its opponents this season, sporting a 4-5 record against the top 25 while winning just one of five games against non-Power Five New England schools.