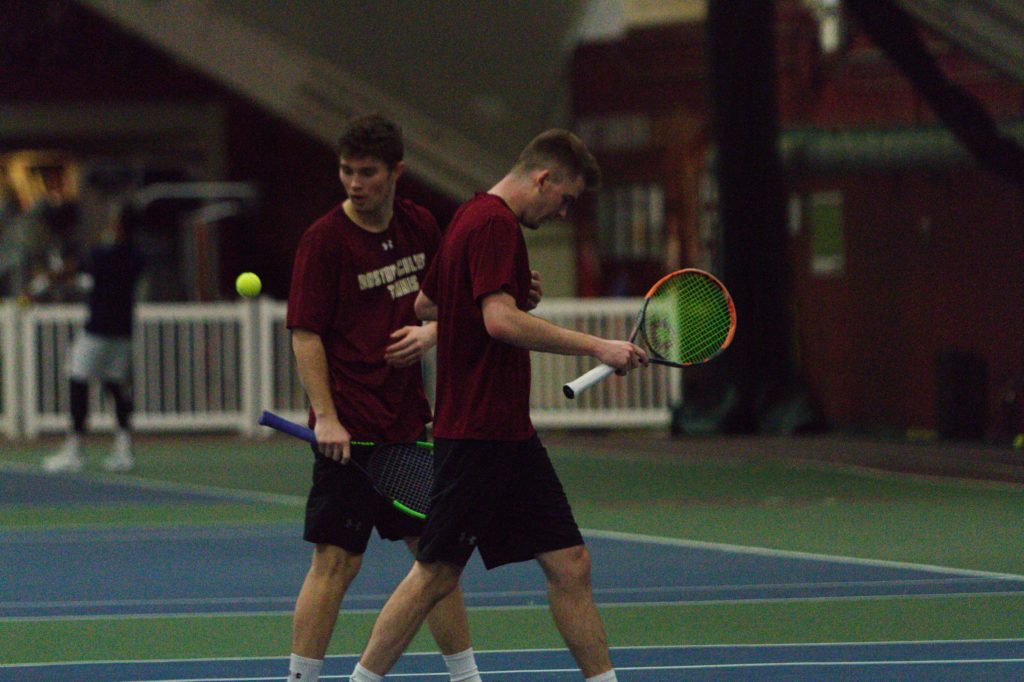 Boston College men’s tennis has struggled to find success against ACC opponents this season. While the Eagles may have picked up several non-conference victories throughout the 2019 campaign—like they did over Holy Cross on Wednesday—they have failed to pick up a single win over a conference foe. Unfortunately for BC, that trend continued on Friday night in a matchup with North Carolina. The Eagles dropped their 10th conference bout in as many matches, losing to the Tar Heels, 6-1.

In doubles play, BC (6-13, 0-10 Atlantic Coast) was unable to gain the initial advantage. At first doubles, the 34th-ranked pair of William Blumberg and Blaine Boyden handled Derek Austin and Conor Mullins, 6-1. It was a disappointing outcome for Austin and Mulins, after they prevailed against the top doubles team from Harvard a week prior. Meanwhile, on the third court, Max Mendelsohn and Sean Mullins fell to Simon Soendergaard and Josh Peck, 6-3. Chris Grasel and Markus Nordby were winning their match, 5-4, but UNC (15-4, 7-2) had already secured the doubles point.

Operating at first singles, Austin was tasked with taking down No. 35 Benjamin Sigouin. While the junior put up an admirable fight in the first set—only getting edged out, 7-5—he could not sustain the same level of play in the second frame. Sigouin capitalized, cruising to a 6-1 victory to earn a point for the Tar Heels. Nordby faltered in his matchup with Peck. While the sophomore has notched some impressive singles wins this year—including an upset of Wake Forest’s Rrezart Cungu on March 24—he failed to replicate that success against Peck. Nordby’s match wasn’t particularly close, as he fell in straight sets, 6-2, 6-2.

Down the rest of the lineup, BC—for the most part—struggled. At third singles, Conor Mullins dropped his match to Brian Cernoch in an identical score to Nordby’s contest, 6-2, 6-2. Mendelsohn put up a stronger fight, though. Facing off against Boyden, Mendelsohn forced a first-set tiebreaker, which he narrowly lost, 7-5. In the following frame, Boyden asserted control, winning, 6-2. Max Palmer couldn’t get anything going against Soendergaard, losing, 6-3, 6-3. The lone Eagle to pick up a point was Wills Tutecky. Building off a 6-0, 6-0 sweep against Holy Cross’s Matthew Slowinski, Tutecky kept the train rolling, as he narrowly defeated Ladd Harrison, 6-4, 7-6.

Amid ACC matches, head coach Scott Wilkins’ team often stages an upset or two, but it can never string together enough to enter the win column. If the Eagles go winless in conference play in 2018-19—which seems quite likely—that would push their ACC record over the course of the past four seasons to a putrid 1-48. At this point, with only three conference tilts left, the only hope for BC is that it was around this time last year—April 15, 2018 to be exact—that it upset Miami. Time will tell if the Eagles can muster another conference victory.