Home » Letter to the Editor: In Response to “A Fifty Year Love Story: Jeff and Margaret Flagg”
Opinions, Letters To The Editor

Letter to the Editor: In Response to “A Fifty Year Love Story: Jeff and Margaret Flagg”

I’m just writing to thank you for publishing your piece about Profs. Jeff and Margaret Flagg in the Mar. 24 edition of The Heights. They have been so important to this school and to everyone here who has known them, and it’s going to be hard to imagine Boston College without them.

I first met the Flaggs four years ago as a freshman; I took a French course with them, and they were and are wonderful. The classroom was filled with great stories and jokes, lots of laughter, and (believe it or not) fun adventures with “Mireille and Robert,” two characters in the “French in Action” program.

It’s difficult to do justice to that class, but Jeff and Margaret gave it this sense of warmth and joy—real, genuine human interaction. Jeff called me and my classmates “our friends,” and we were friends—we all knew each other and cared about each other. For me, a kid who was new to college and who was still worried about finding friends and knowing people, it was the best thing that could have happened.

I’m going to miss that—and just stopping by and chatting with them, as they tell a story about a fascinating person they’ve met and want to know how your day’s going. Both Jeff and Margaret love this school with their whole hearts, and they’ve given so much to it.

They deserve a wonderful retirement—though, knowing them, they have plans already made for it, probably ones that involve France! I know I’ve told them before, but I just want to say thank you to them both, so much. You’ve meant so much to me and to all of us who have been in your classes. Enjoy your retirement; you deserve it. We’re all going to miss you. À bientôt, professeurs! Merci beaucoup pour tout. 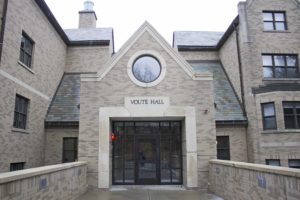