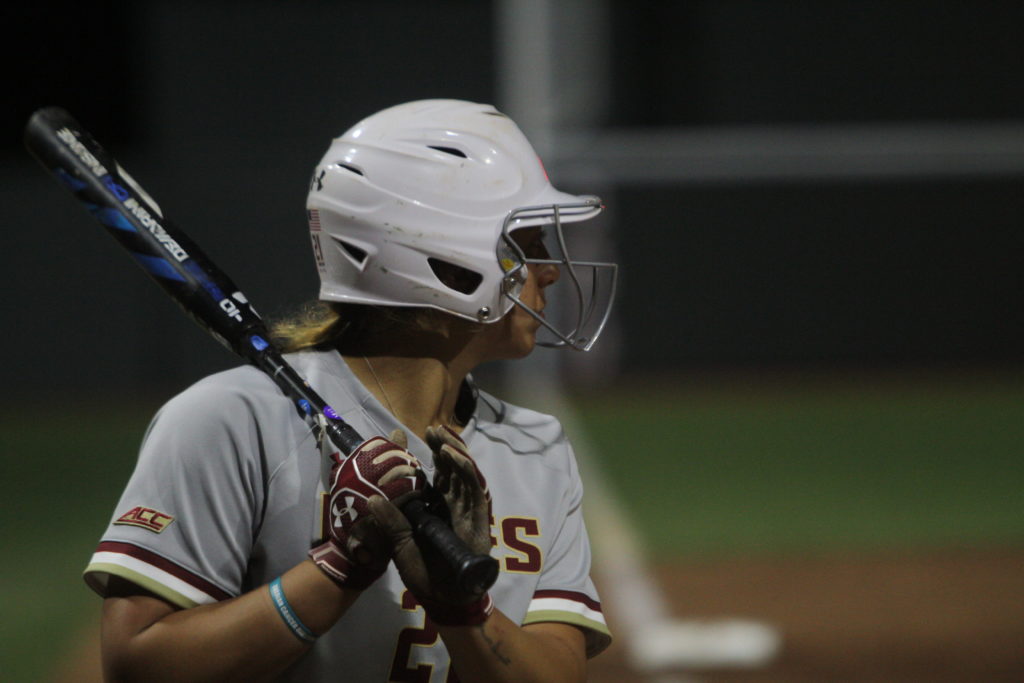 Gianna Boccagno has provided a welcome offensive boost to Boston College softball this season with her power. Entering Saturday’s contest against Louisville, the freshman had already hit six home runs in 2019—a number which matched Chloe Sharabba’s team-high mark from last season with 16 games still to play in the regular season.

In the second game of the weekend series against the Cardinals, she once again sparked the offense with a big fly. Just after Louisville had knotted the score at 2-2 in the fourth inning, Boccagno launched a two-run shot over the left field fence on a full count to restore the Eagles’ lead. The home run sparked a four-run fourth inning that gave BC an advantage it wouldn’t relinquish, as the Eagles evened up the series against the Cardinals with an 8-2 victory.

It didn’t take Louisville (26-15, 7-7 Atlantic Coast) long to get on the board. Celene Funke led the game off with a line drive single into center field, stole second and promptly raced home on another single from Sidney Melton. Susannah Anderson—who got the start and pitched 3 1/3 innings—rallied to notch two strikeouts and limit the damage, however, and quickly got some help from her offense as a reward.

Lexi DiEmmanuele—who is batting .354 on the season to lead the team—led the first off with a base hit, Ellie Mataya followed with a walk, and both runners moved over with Emme Martinez’s groundout. Allyson Moore made sure the rally wouldn’t peter out, sneaking a single up the middle to score DiEmmanuele, and a wild pitch brought Mataya home to give the Eagles (14-24, 4-10) a 2-1 lead.

The Cardinals tied the game in the fourth, thanks to control issues from both Anderson and Camryn Dolby—who eventually recorded the win. Anderson hit Caitlin Ferguson with a pitch before walking Kyra Snyder to load the bases. Head coach Ashley Obrest removed Anderson for Dolby, but the freshman issued another walk to Maddy Newman that forced in a run and tied the game.

Boccagno would respond with the home run in the bottom of the inning and continued to add to the lead by exploiting Louisville’s matching inability to hit the strike zone. Kennedy Labshere and Carly Severini both drew walks to chase Cardinals starter Danielle Watson, but her replacement, Taylor Roby, also struggled. Mataya drew her second walk of the game after another DiEmmanuele hit to extend the lead to 5-2, and BC pushed one more run across, courtesy of a Ferguson fielding error.

The Eagles kept producing in the fifth, in large part because of a two-run RBI double from Severini, further ensuring that a late Louisville surge would not be enough. Megan Hensley tagged Dolby—who allowed two runs on five hits in 3 2/3 innings of work—for a two-run home run in the top of the seventh to narrow the deficit to 8-4, then the Cardinals brought the tying run to the plate after a Charley Butler walk put a runner on every base. Dolby, however, kept her composure, striking out Newman to end the game.

The eight-run outburst marks just the third time BC has scored more than five runs in conference play—a concerning trend for a team that doesn’t have the stellar pitching of the 2018 team to offset bad offensive performances. The Eagles currently have the third-worst batting average in the conference and have scored the fewest runs in the ACC. Moving forward, those two numbers will certainly have to increase for BC to continue to compete with teams like the Cardinals. Only time will tell if Saturday’s win can be a turning point in that regard.