Home » Ngai, Dominant Defense Leads BC Past Louisville in First Round 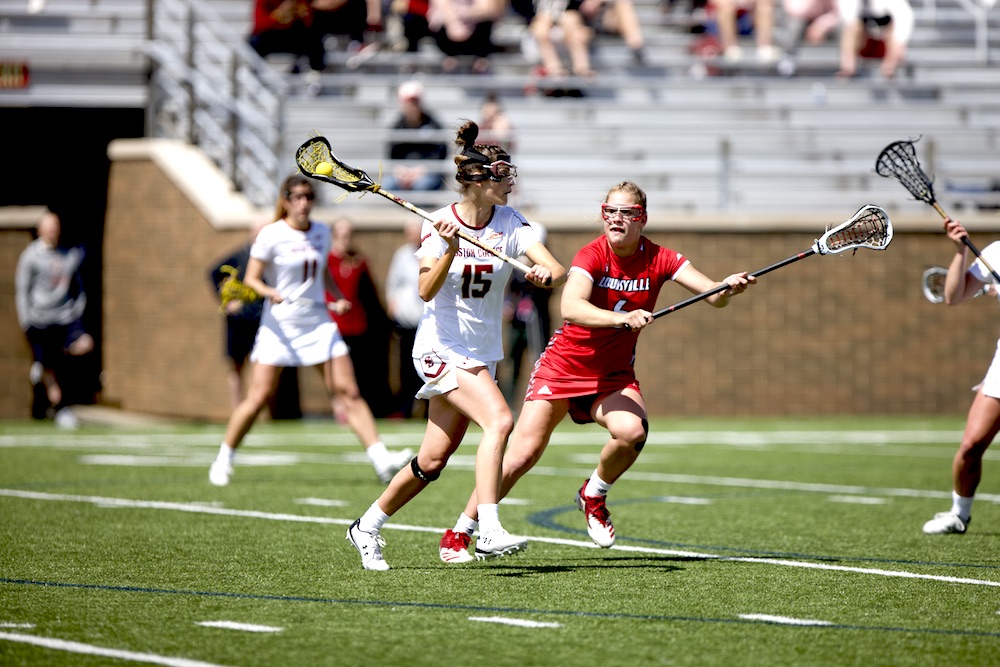 Ngai, Dominant Defense Leads BC Past Louisville in First Round

In the first half of the first game of the ACC Tournament for Boston College women’s lacrosse, that’s all you could say about its opponent’s offense.

While Abbey Ngai shut out eighth-seeded Louisville in the opening 20 minutes, the Eagles’ offense managed to score eight goals in the first half, eventually coasting to a 15-4 win to advance to a quarterfinal contest against Syracuse.

BC (18-0, 7-0 Atlantic Coast) once again made its presence known from the beginning, proving to Louisville (5-13, 0-7) early on that the game would be no different from its 19-6 blowout against the Cardinals just four days prior. Just one minute and 11 seconds into the game, Cara Urbank had already tallied her 42nd goal of the season.

Exactly three minutes later, Brooke Troy pitched in with a shot of her own that flew past Louisville goalie Rachel Florek.

With no scoring over the next nine minutes of gameplay and a fair share of BC turnovers,  attention turned away from the playing field and toward the team’s benches. Loud yet hollow support came from the Louisville sideline, representative of a team that, even after just over 10 minutes and a two-goal deficit, knew it needed to find some semblance of momentum to keep things close.

As this artificial team energy persisted, BC remained on the offensive. Throughout Alumni Stadium, BC head coach Acacia Walker-Weinstein could be heard barking out plays and formations to her team, which answered with another two-goal scoring burst.

After Sheila Rietano put away a quick shot in the slot, a draw control win and a yellow card on Cardinal defender Sarah Blalock resulted in a man-up goal from Jordan Lappin not a minute later. Lappin would net another goal just three minutes after that and ended up with a hat trick—on BC’s eighth and final goal of the period—with just under two minutes left in the first half.

While Lappin scored three goals on her own, the Cardinals ended up with just six shots as a team, and none were able to get past Ngai.

Sandwiched between Lappin’s second and third goal were scores from Sam Apuzzo and Taylor Walker for BC. Apuzzo’s goal wasn’t even her most impressive play of the half, though. With just a few ticks left on the first half clock, she made one of the most remarkable plays of her remarkable career at BC—except it didn’t count.

After the Eagles drove the length of the field in a matter of seconds, Apuzzo delivered a shot from the inner circle that careened hard off the left post and right back into her stick net. Instinctively, the senior immediately sent another shot right where she had intended it to go the first time, but the first period buzzer had already gone off.

While Apuzzo’s Eagles couldn’t have ended the half in stronger fashion, it was the Cardinals’ Ally Hall who jumped out to a hot start in the second frame. When no other player on the field seemed to have woken up from a halftime intermission, Hall took control of the game herself, scoring two goals in the opening four minutes.

It wouldn’t be close to enough, though, as the Eagles eventually scored seven more goals of their own, one notably coming from Jenn Medjid with a man down.

Although Louisville managed two more goals, BC freshman Caitlynn Mossman rounded out the scoring with her first career goal, giving the Eagles a total of 15-plus goals for the fifth consecutive game and just in the nick of time, too, with 33 seconds to play.

Walker-Weinstein highlighted the team’s opportunity to play at Alumni Stadium, BC’s recently established—at least temporarily—home field, as one of the reasons why the team is destined for success in the tournament.

“It’s awesome. It’s so exciting for the girls,” she said. “Last week against Yale and Louisville we got used to the lighting and the rest of the stadium. Now we have people from all over the state coming in.”

Playing in Chestnut Hill this time around could be the difference in the completion of an undefeated season for BC. Last season, the conference tournament ended for the Eagles in the ACC Championship against North Carolina, but now the team is playing in a stadium it’s more comfortable with—and it has the rest of Massachusetts by its side, which certainly doesn’t hurt.