Uber and Lyft Policy to Change at Logan Airport

The proposal to ban Uber and Lyft from picking up and dropping off customers on the curb outside of the Logan Airport terminals and to add a drop-off fee at Logan was approved Thursday. The Massachusetts Transportation Authority (Massport) voted to institute the new policies beginning in October 2019.

Prior to this proposal, there was only a fee for being picked up by a rideshare service. Both the pick-up and drop-off fee will be $3.25, which is the same price of the previous pick-up fee. Rideshare customers will have a reduced fee of $1.50 to incentivize carpooling, limiting the number of vehicles circling the airport.

The pick-ups and drop-offs will occur on the first floor of the Central Parking Garage, but drop-offs between the hours of 4 and 10 p.m. will be allowed at the terminal’s curb. This will be allowed because the Massachusetts Bay Transportation Authority (MBTA) doesn’t start working until 5:30 a.m., and most of the airport traffic at this time is for departures, the statement said.

The plan will be reviewed in six months, but it is expected to reduce 30 percent of “deadhead” vehicles, which are cars that pass through the airport without picking anybody up or dropping anybody off. Five million rideshare vehicles were qualified as deadheads last year, according to Massport.

“The increasing congestion is negatively impacting the airport roadway, the tunnels and Rte. 1A,” said Lew Evangelidis, Massport board chairman and Worcester County sheriff, in a statement. “This is the best plan for the long-term sustainability of Logan Airport, by reducing the traffic for all airport passengers, as well as the residents of our surrounding communities. This will be subject to review as we move forward.”

The $3.25 fee for pick-ups was among the lowest for airports in the nation, Massport said in a statement, and adding the drop-off fee would bring it to middle ground. Rides to and from O’Hare International Airport in Chicago have a $5 fee and trips to and from Los Angeles have a $4 fee, according to Lyft’s website.

“As a strong economy continues to drive Logan Airport passenger demand, we are confident that our new plan is a step in the right direction to help alleviate congestion on our roadways, the tunnels and in our surrounding communities,” said John Pranckevicius, Massport’s acting CEO, in the statement. “Our goal has always been to move more people in less vehicles while providing a better customer experience, and we think this plan achieves that.”

Uber and Lyft rides increased by 29 percent in March of this year, Massport reported. It estimated that there will be 15 million rideshare rides this year.

The new location in the Central Parking Garage will have baggage check, Wi-Fi, and wheelchair access, in addition to being weather protected, and climate controlled. It will also better allow rideshare services to match with customers in an efficient way, making the wait time smaller for drivers and riders.
Massport first announced this proposal in March and received a counter offer from Uber, which did not approve of the changes. Governor Charlie Baker announced on Wednesday before the vote that he supported Massport’s proposal, according to The Boston Globe. 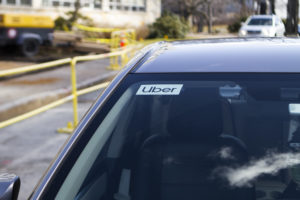