Home » Bats Go Quiet, BC Shut Out in Series Finale Against Blue Devils 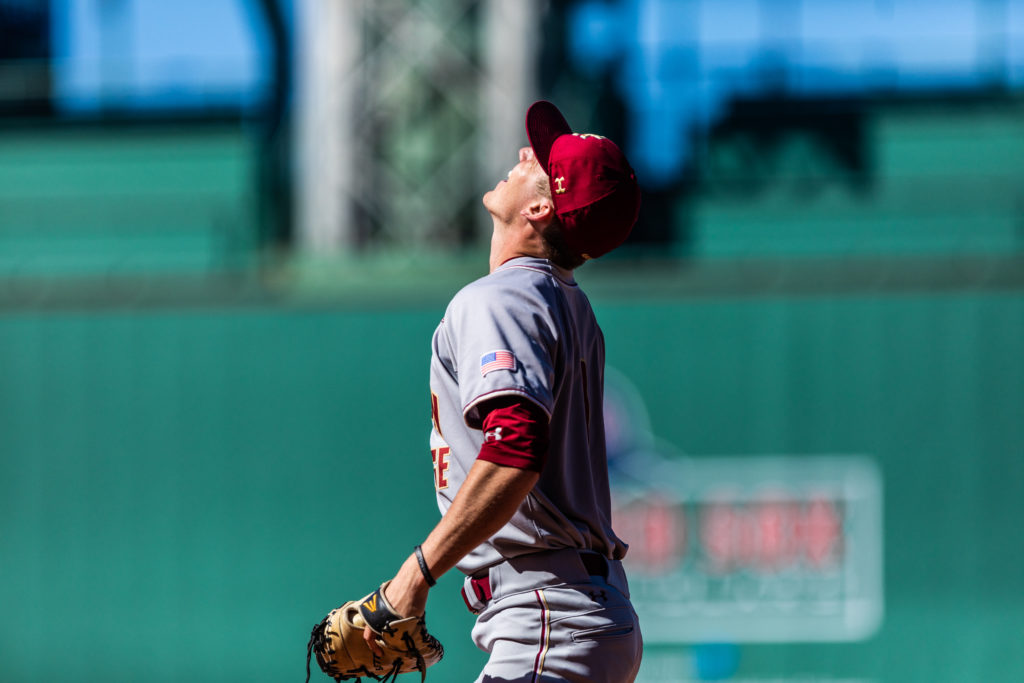 Bats Go Quiet, BC Shut Out in Series Finale Against Blue Devils

Outside of Dan Metzdorf and Mason Pelio, Boston College baseball has struggled to find other consistent pitchers in its rotation. While this pitcher-by-committee arrangement has worked against non-conference opponents to a certain degree, it has resulted in disastrous results against ACC foes. Saturday night’s matchup against Duke—the second game of a doubleheader—was yet another example of that. While the Eagles stayed competitive in the early juncture, they fell behind by a significant margin and were shutout in an 8-0 loss.

John Witkowski drew the start for BC (22-24, 8-16 Atlantic Coast), and he held the Blue Devils (27-17, 13-11) scoreless in the first two innings despite running into some trouble. In the first frame, the senior gave up two singles, but Kyle Gallagher grounded into a double play to end the threat. During the next frame, Chase Cheek hit a leadoff single off Witkowski and then stole second. Cheek advanced to third following a Michael Rothenberg groundout and an Erikson Nichols hit-by-pitch, at which point Duke had runners on the corners, but Nichols was called out at second after Rudy Maxwell grounded out to shortstop.

While BC was ultimately shut out, it still finished the night with eight total hits. Unfortunately for the Eagles, they simply could not drive anybody home. In fact, they stranded one or more runners in five of the first six innings. In the bottom of the second, BC had both Dante Baldelli and Cody Morissette on first and second, respectively, but Joe Suozzi grounded to shortstop, stranding two runners. The Eagles once again stranded two runners in the third after Jake Alu walked and Brian Dempsey recorded a single. But, with two outs, Jack Cunningham went down swinging.

Meanwhile, in the fourth, Duke scored the first run of the contest. Joey Walsh walked Ethan Murray and proceeded to give up a single to Rothenberg, which put runners on first and third. Nichols then singled to center, scoring Murray. While Walsh logged the next two outs to end the inning, he ran into more trouble in the fifth. Matt Mervis reached base on a fielder’s choice, and Cheek doubled on the first pitch of the at-bat, putting himself and Mervis in scoring position. Walsh was pulled for Sean Hughes, who ended up balking. Mervis scored off Hughes’s blunder for the Blue Devils’ second run.

That wasn’t the end for Hughes, though. While the righthander got Rothenberg to groundout to commence the sixth, he then struggled immensely to find the strike zone. Hughes gave up walks to three straight batters in Nichols, Maxwell, and Joey Loperfido. Head coach Mike Gambino had seen enough, as he inserted Matt Gill to replace Hughes. That decision didn’t exactly pay off, as Kenny Taylor singled to right, driving in both Nichols and Maxwell and allowing Loperfido to move to third. Shortly after, Mervis launched a sac fly to conclude Duke’s scoring run.

Gill may have escaped the seventh without getting flagged for a run, but the same could not be said in the eighth. After Loperfido singled to leadoff the inning, Taylor immediately followed with a triple—his third of the series. Mervis then notched his second sac fly, giving the Blue Devils their second run of the inning. Gill struck out Gallagher, but he couldn’t notch the final out. Cheek singled and stole second base, and Murray’s single put him and Cheek on the corners. Rothenberg tallied his second hit of the night with a single to center, driving in Cheek and capping off Duke’s eight-run bonanza.

Gian Martellini and Morissette both singled in the bottom of the eighth, but Baldelli hit into a double play, which left the Eagles scoreless once more. Not much changed in the ninth, either. Lucas Stallman singled to left, but Suozzi, Chris Galland, and Alu all went down to Eli Herrick.

Shockingly, the last and only time BC won a game on Saturday came in its first series of the year against Jackson State. Outside of Dan Metzdorf and Mason Pelio, the Eagles lack a consistent starter and have had to rely on a wide array of arms in each game in an attempt to stitch together a complete effort.

As a result of this setup, BC has had a hard time yielding consistent results against conference opponents. The only time that the Eagles won an ACC series came against Florida State down in Tallahassee on March 31. Other than that, though, BC has only recorded a single win in each of its weekend series, with the lone exception being a sweep at the hands of North Carolina. As it stands, the Eagles’ conference winning percentage of just .333 is third-worst in the conference, which puts them in jeopardy of missing the ACC Tournament.