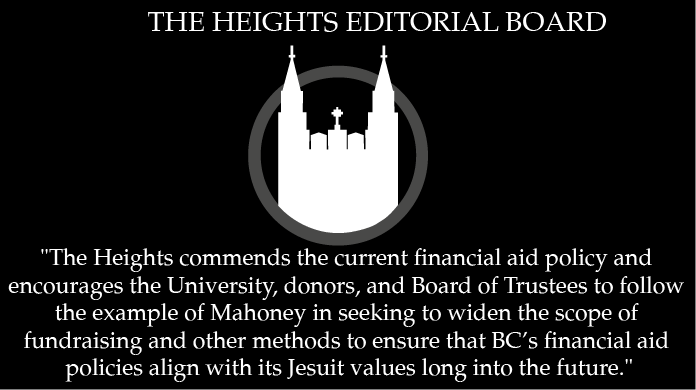 Boston College is one of only 18 private liberal arts universities that is both need-blind and meets all demonstrated need. The University takes pride in being need-blind, as it helps BC to live up to its Jesuit values, therefore allowing the school to include and educate a more talented and diverse pool of students. At a student-administrator forum on April 23, Vice Provost for Enrollment Management John Mahoney, BC ’79, cautioned that—due to rising tuition costs—the University and its donors will need new solutions in order to meet these financial needs. According to Mahoney, the total cost of attendance at BC is expected to surpass $100,000 in eight years. Increasing tuition trends remain constant across American universities.

It is exactly people like Mahoney—committed and proactive in ensuring that BC’s financial aid policies do not change—who are necessary to ensure that BC remains need-blind. More families will require financial aid, and families who already qualify will re-qualify for higher amounts of aid as BC’s tuition continues to climb. The University will need to increase its fundraising efforts so that it can meet full need, and to confirm that those donations are unrestricted so that they can be used for financial aid. The University and the Board of Trustees should make sure that remaining need-blind is a top priority for the school.

As Mahoney explained, the hike in tuition will likely cause families who are currently classified as “low” and “medium” need to become “high” need, and some families who currently do not qualify for financial support to require need-based aid. The cost of university attendance in the United States has risen almost eight times faster than income since 1986. Of all undergraduate students at Boston College, 67 percent receive need-based financial aid.

This admissions cycle, the College of the Holy Cross announced that it could no longer afford to be need-blind. The change drops the number of private liberal arts universities within the U.S. that are need-blind and meet full demonstrated need to only 18, BC included. The University awards over $130 million in financial aid each year. In expectation of mounting financial aid need, BC should look into expanding fundraising campaigns and events, such as the popular Pops on the Heights, a concert during parents weekend, which alone raised $13 million for financial aid.

BC is a better place, thanks to its need-blind admissions policy and its commitment to meeting full demonstrated need. It is imperative that further fundraising efforts begin soon, to ensure that there is no potential disruption of aid. The Heights commends the current financial aid policy and encourages the University, donors, and Board of Trustees to follow the example of Mahoney in seeking to widen the scope of fundraising and other methods to ensure that BC’s financial aid policies align with its Jesuit values long into the future.