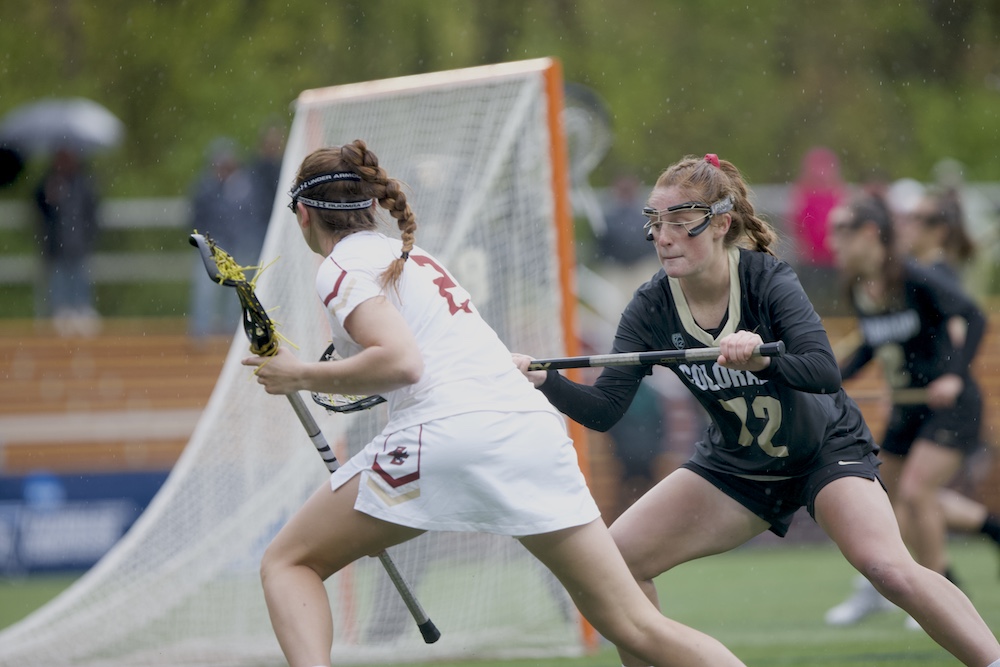 In last year’s first round of the NCAA Tournament, Boston College lacrosse made sure to dispel all doubt of an ACC Championship game hangover by staking itself to an early 5-1 lead in an eventual win over Princeton. On Sunday afternoon against No. 20 Colorado, the No. 1 Eagles didn’t get off to quite the same start. In fact, through the first 13 minutes of play, the visiting Buffaloes forced the usually efficient Eagles to commit nine turnovers, and the teams were all tied up at three apiece.

Then, much more par for course for a team that has won 41 of its last 43 games, BC shook off a sloppy start and simply erupted. With Sam Apuzzo and Kenzie Kent leading the way, the Eagles went off for 11 unanswered goals, turning a close matchup into a blowout. Apuzzo scored six goals in the first half alone, and BC cruised in the second half, ultimately advancing to an Elite Eight matchup against Princeton on the back of a 21-9 blowout.

“Colorado is a good team and we knew they were going to be excited for playoffs,” BC head coach Acacia Walker-Weinstein said. “We just had to refocus on the Xs and Os and just stay steady. We had to commit to the game plan, even when it was tight, and it ended up working out.”

Apuzzo finished with seven goals, an assist, five forced turnovers, and a season-high 13 draw controls. It was a dominant performance from the senior as she consistently got the Eagles (20-1, 7-0 Atlantic Coast) the ball, whether it was through heads-up defense or a strong showing in the draw circle.

Joined by Kent—who had four goals and five assists for a team-high nine points—and multi-goal games from Kate Taylor, Taylor Walker, and Sheila Rietano, BC was overpowering in the offensive zone. Paired with the fact that the Eagles held a 23-8 edge in draw controls and scored on nearly 70 percent of their shots, it wasn’t much of a game after BC took its first lead of the day at the 13-minute mark.

“I think everybody is prepared to step up and contribute,” Walker-Weinstein added. “They’re so unselfish, they’re moving the ball when we’re playing against a zone. It gets passed through a lot of different peoples sticks.”

The Buffaloes’ (11-8, 8-2 Pac 12) defense—which entered allowing just 9.67 goals per game, good for 17th in the nation—was bewildered by the array of scoring options that they were confronted with. To make matters worse, Colorado couldn’t get the ball back during the first-half stretch, winning just two of the 19 draw controls in the opening period. While Buffaloes attacker Charlie Rudy had a hat trick in the first half, she was the lone bright spot, taking five of the team’s first eight shots.

Rudy would finish with five goals on 11 shots, but Colorado’s leading scorer—and Pac-12 Attacker of the Year—Miranda Stinson was held off the board until she scored a meaningless goal with one second left on the clock. Stinson entered with 63 goals and 16 assists in 18 games, but was largely held in check by a stifling BC defense. Anchored by Abbey Ngai in the back, who finished with five saves in nearly 50 minutes of game time, the Eagles were frustrating to crack. Stinson finished with two turnovers and just two shots the entirety of the game, a frustrating way to go out for the senior.

“You have to stop the top player on the other team,” Walker-Weinstein said. “We’ve been studying and watching film of her and she’s an incredible athlete. The girls knew they had a big job and they were just focused on it.”

Sheila Rietano opened the scoring for BC, but her goal prompted a back-and-forth with Colorado. Rudy scored twice, then Apuzzo answered with consecutive goals. The first was the result of a turnover the senior forced, and the second was a free-position shot that took an unfortunate deflection for Colorado off defenseman Eliza Cahill’s stick. Colorado’s Samantha Nemirov equalized, but that was followed by an absolutely dominant 11-goal stretch from the hosts.

The Eagles took the lead in a 20-second span, with Kent feeding Apuzzo before taking it herself on a free-position shot. After a Rietano free-position goal, Apuzzo singlehandedly caused a turnover, recovered the ground ball, and beat Julia Lisella on a breakaway. It was an impressive goal, but was quickly shown up by an alert one-timer from Taylor—she caught Kent’s feed at the far post and whipped it past Lisella for a five-goal lead.

BC would go on to score 13 of the game’s next 18 goals in a variety of ways. Walker faked not once but twice before slipping a shot past Lisella, then Apuzzo added a hockey-style goal with a slapshot of the ball after it was jarred from her stick. Then, with six minutes left in the first, Kent somehow managed to score despite standing parallel with the net. The Eagles eventually took their foot off the gas somewhat in the second, but still had time to rack up 21 goals, tying the program’s highest scoring output in a NCAA Tournament game.

The dominance could be easily seen, but consider this: BC’s second-highest goal scorer in the regular season, Dempsey Arsenault, took just three shots and scored once in the entire game. She was more than comfortable with sitting back and letting players like Taylor (eight goals coming in) take the reins. With that kind of depth, it’s hard not to see the Eagles once again playing in the championship game a few weeks from now.