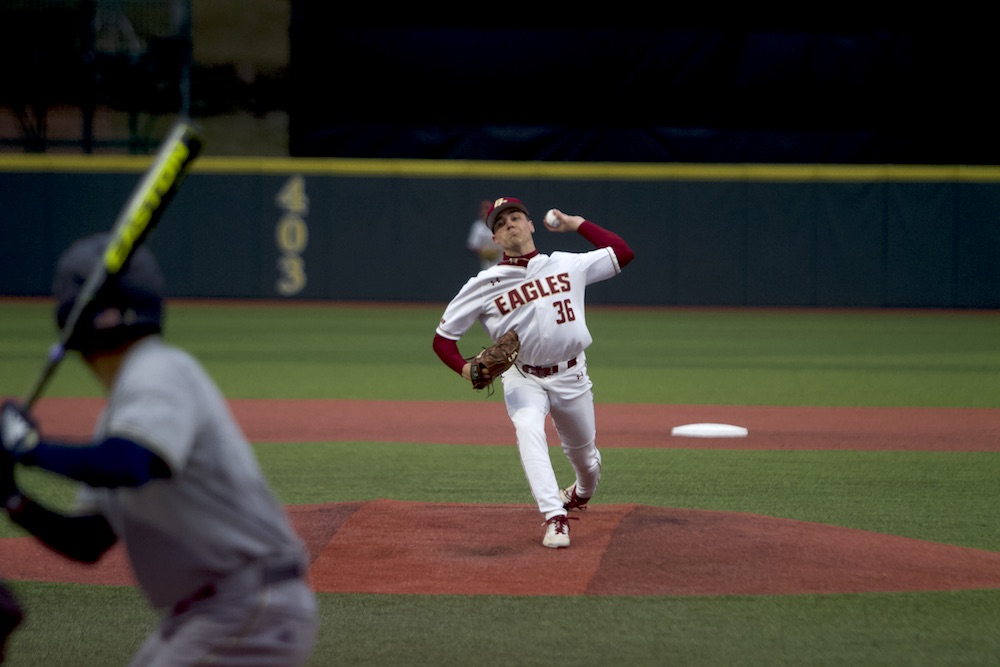 At the start of the 2019 season, after losing 32 games and seeing two-thirds of his weekend rotation and his top hitter depart, Boston College baseball head coach Mike Gambino offered nothing short of optimism regarding his team.

“If it all comes together, this team is going to be really, really good,” Gambino said. “I think if this team is in playoff baseball, I’d be really confident of that team.”

And, on Thursday night, that faith was rewarded against rival Notre Dame. The Eagles staked senior southpaw Dan Metzdorf to a five-run lead through two innings and that was more than enough support. Metzdorf, in his final home start in a BC uniform, pitched into the eighth inning, and the Eagles rolled to a 10-1 win, punching their ticket to next week’s ACC Tournament as the 12th and final seed.

BC (28-25, 11-17 Atlantic Coast) won its third straight game and has taken six of its last seven. Metzdorf spun his sixth quality start in as many outings, fully erasing a seven-run debacle against Clemson at the end of March with an impressive stretch. Against the Fighting Irish (23-27, 12-16), the Burlington, Mass., native went 7 2/3 innings and allowed a lone earned run while striking out four. He kept Notre Dame off the board until the sixth inning, when BC already had a 5-0 lead and was in full control.

Two days after piling up 19 runs in a wild victory over Maine, the Eagles’ bats picked up where they left off. Jake Alu continued his torrid senior campaign by going 2-for-4 with four RBIs and four runs scored, hitting a two-run home run in the sixth and adding an RBI double in the eighth. Jack Cunningham added two RBIs while the bottom of the BC lineup was particularly potent, with the combination of Chris Galland, Peter Burns, and Dante Baldelli accumulating five hits and five runs scored.

The Irish’s trio of pitchers—Cameron Junker, Anthony Holubecki, and Zack Martin—were unable to slow a lineup that has totaled 29 runs in its last 16 innings despite the loss of leading hitter Sal Frelick to injury two weekends ago. Junker lasted just two innings, conceding five runs as he wrestled with command issues—the junior walked four and needed 57 pitches. Holubecki was more effective, spinning three scoreless frames before Alu and Baldelli got to him in the sixth. Finally, Martin worked a 1-2-3 seventh before Alu and a wild pitch capped the scoring at 10.

They were no match for Metzdorf, who has been practically unhittable for several weeks now. Since the aforementioned loss to Clemson, Metzdorf has thrown 49 innings and allowed just 11 earned runs while striking out 44, good for a sparkling 2.20 ERA and a 5-0 record on the mound. His dominance has been much needed for the Eagles’ push to the postseason, as it coincided with a dip in performance from teammate Mason Pelio—a freshman who has slowed as of late with the demands of the collegiate season.

Punching its ticket against Notre Dame was likely satisfying for BC, especially as it did the same thing two years ago. In 2017, the Irish came to Chestnut Hill and lost three straight to give the Eagles a spot in the ACC Tournament. BC would go on to lose twice and drop out of the field, which is something that seems unlikely considering its resilient tendencies this season.

Entering this series with Notre Dame, the Eagles had played nine ACC weekend series—and failed to take a single game in just one, against North Carolina. BC has shown with regularity that it can hold its own with the best, which is what it’ll need when it finds itself in pool play against the number one and number eight seeds, currently represented by Louisville and Wake Forest.