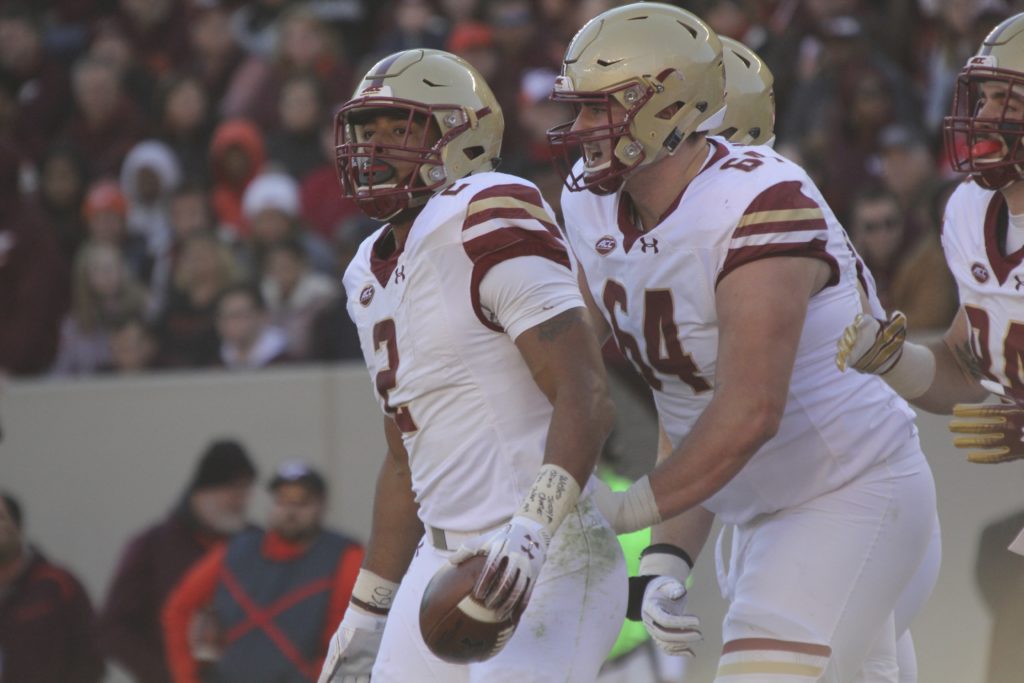 Boston College football center Ben Petrula didn’t enter Chestnut Hill with anywhere close to the same buzz as A.J. Dillon, but the two have been at the center of the Eagles’ offense since the fall of 2017, and now, two years later, the duo is headlining BC’s preseason honors.

On Tuesday, Petrula and Dillon were named to the All-ACC Preseason Team, as the Eagles joined Florida State as the only other ACC team with two representatives. Miami has three, Syracuse has four, and reigning national champion Clemson boasts a whopping 13.

Not only do the Tigers make up practically half of the 27-member team, but they also have the league’s Preseason Player of the Year in Trevor Lawrence, as well as the award’s runner-up in Travis Etienne, who won 2018 ACC Player of the Year honors.

A year removed from being tabbed the 2018 ACC Preseason Player of the Year, Dillon received 15 votes for the accolade, following Lawrence and Etienne on the ballot. The New London, Conn. native is coming off an injury-riddled season—one in which he missed two games and left the final four contests early with an ankle injury, but still managed 1,108 yards and 10 touchdowns on the ground. Yet, because of his monstrous ACC Rookie of the Year campaign and his Heisman Trophy expectations, the 2018 season could be seen as a setback for the 6-foot, 250-pound back.

The year before, Dillon emerged as BC’s premier tailback during the first half of the 2017 season. But it wasn’t until the Louisville game that he made a name for himself on the national stage. Dillon rumbled past the Cardinals for 272 yards and four touchdowns. Five weeks later, he ran all over Syracuse for 193 yards and a trio of scores. In between, the then-freshman racked up 634 yards, surpassing the 145-yard mark each game. When all was said and done, Dillon finished the year with 1,589 rushing yards and 14 touchdowns.

Petrula was at the middle of it all—literally. After Jon Baker went down with a season-ending knee injury during the fourth quarter of BC’s opener against Northern Illinois, head coach Steve Addazio found himself without a center. Typically, Shane Leonard would have filled the void, but the then-redshirt freshman had been sidelined the past three weeks with an injury of his own. So, Addazio turned to Petrula, who had never made a collegiate start, let alone played the position. In time, though, he transformed a weak spot in the BC O-Line into a strength.

With Baker back for one final season in 2018, Petrula slid back to his natural tackle position and started all 12 games on the right side of the line, becoming an All-ACC Honorable Mention in the process. Over the course of the season, the sophomore played 95.2 percent of the Eagles’ offensive snaps, helping BC total 4,852 yards on the year.

Once again, Dillon and Petrula’s production will go hand-in-hand in 2019—only this time, they’ll both be in the spotlight.