In a game where the result can turn on a dime and turnovers happen at the drop of a hat, it’s all about rebounding. Whether it’s a simple change of possession, a second-chance shot, or the comeback from a career-threatening injury, Boston College field hockey is no stranger to bouncing back.

Mired in a three-game losing streak, the Eagles were on the hunt for a rebound victory on their own turf against Dartmouth. BC made it clear that it wouldn’t leave the turf without a victory and came out from the very first minute pressing high up top, itching to get the ball to the back of the Big Green’s net. That consistent pressure was more than enough, with the Eagles rolling to a 5-2 win on Friday afternoon.

“After a three-game losing streak, two of them against high-ranked opponents, at the end of the day… winning is everything,” emphasized head coach Kelly Doton.

A few shots came early in the first quarter but were quickly cleared by Dartmouth’s (0-3) strong defense, including two blocks off volatile penalty corners. The Eagles’ (2-3, 0-0 Atlantic Coast) offense really began to light up in the second quarter, though, after forward Margo Carlin opened up the scoring just two minutes in. Her goal came as a result of a rebound from teammate Nell Weber’s shot.

Carlin, a freshman and a “natural goal scorer” according to Doton, is no stranger to second chances. After suffering an ACL injury late in her high school career, Carlin looks on track to be a key contributor for the Eagles’ offense in the coming years.

“You wouldn’t even know that she was injured,” Doton said of the freshman. “She came back in better shape so she’s doing well for us.”

Carlin had a standout game. She scored two goals, both, coincidentally enough, off rebounds. Her second scoring play came late in the third quarter off a putback from Fusine Govaert’s shot to the far corner. Carlin ended the game with seven total shots, all of which were on goal.

After Carlin’s first goal, the score remained stagnant for the entirety of the period until Dartmouth senior Katie Spanos knocked one in from a penalty corner in the first few minutes of the second half to tie it up at one apiece. It wasn’t long before BC got back in the driver’s seat, though, as Elizabeth Warner scored just two minutes later to give the Eagles the lead again. With just over a minute left in the quarter, Carlin scored her second of the day, giving the Eagles some room to breathe. BC attempted to put the game in the bag, with Warner doubling her scoring tally just one minute into the final period, but Dartmouth struck back 19 seconds later, bringing the score to 4-2 in the Eagles’ favor.

But the Big Green’s effort was too little, too late, and BC sealed the win with a final goal from Sky Caron with just 6:28 left in the game. Entering the match, Doton’s goal was for her team to be more accurate on the attack, citing the need to improve the quality of their shots. Clearly, in racking up 33 shots—26 of which were on goal and five that went in—the Eagles lived up to Doton’s expectations.

BC is looking forward to another home game on Sunday against crosstown rival Northeastern, but a win at home is certainly uplifting. The Eagles are looking to rebound from a three-game losing streak with a winning streak of their own, and Friday served as the perfect start.

“A win can always impact you positively,” Doton said. “We still have some things to fix, but I’m happy to get one here against a good Dartmouth team.” 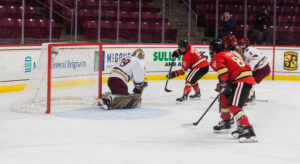 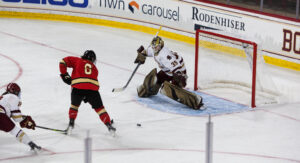