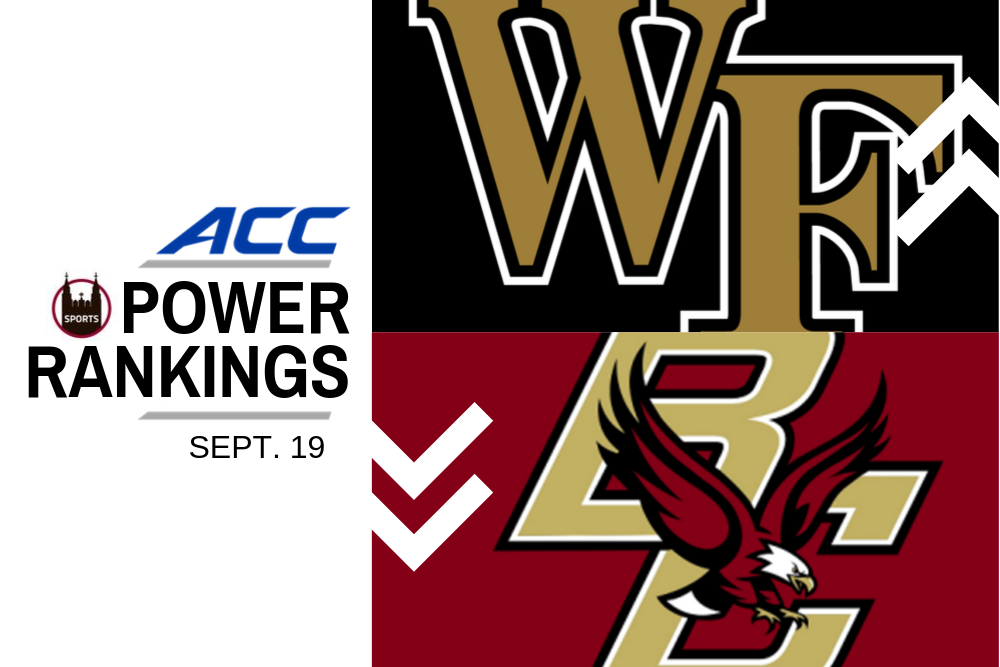 This might very well have been the worst week in quite some time for ACC football.

After Wake Forest and North Carolina played a non-conference game (yes, you read that right), everything just came tumbling down. Kansas beat Boston College for its first Power Five road win since 2008. The Citadel, quite ironically, used a triple-option attack to run Georgia Tech into the ground. Virginia Tech barely beat Furman. North Carolina State was embarrassed by West Virginia. It was an ugly, ugly week and only further solidified the point that it’s Clemson and, quite a bit below, everybody else.

Through three games, the Tigers have a Top 25 win and two conference wins—the latter by a combined 93-20 margin. Even after rolling to a 41-6 win over Syracuse, Clemson star quarterback Trevor Lawrence is facing some questions about his play. He’s already thrown five interceptions, one more than the entirety of last season, and has seen his completion percentage dip by five points in the early going.

The Cavaliers narrowly escaped a resilient Florida State team, with quarterback Bryce Perkins engineering a fourth-quarter comeback in a 31-24 win. Perkins threw two interceptions, but finished 30-of-40 for 295 yards and came away with a crucial two-point conversion. Head coach Bronco Mendenhall had nothing but kind words after, saying “”How do you stop him? We’re not growing the program at the rate we’re growing the program without him.”

Quarterback Jamie Newman has kept his composure in the first three games of the year, and the Demon Deacons are undefeated because of it. Newman engineered a game-winning drive in the opener against Utah State, then helped kill the clock in the fourth quarter with a 12-play, 61-yard drive that ended in a field goal to ice a 24-18 win over a tough North Carolina team. Newman, a junior, is 33rd in the country in quarterback rating (72.6) and has thrown seven touchdowns to just one interception.

The Tar Heels ended up on the wrong side of the scoreboard against Wake Forest, but hung tight. UNC has shown the ability to erase deficits—it came from behind to beat South Carolina, then scored with just over a minute left to sink Miami—but it couldn’t do the same against the Demon Deacons. The Tar Heels trailed, 21-0, at the break, and even a 15-point fourth quarter wasn’t enough. They’ll have to focus on coming out stronger if they’re to make more noise in conference play.

Simply because the Blue Devils convincingly took care of business against Middle Tennessee State, they’ll slot in at No. 5. That alone says quite a bit about this conference. Duke has bounced back from a 42-3 shellacking by Alabama, going 2-0 against weak non-conference foes. Quarterback Quentin Harris looked the part of a Daniel Jones replacement against the Blue Raiders, throwing for 237 yards (completing 23-of-27 passes, too) and four touchdowns while also adding 107 yards on the ground.

With disappointing losses to No. 8 Florida and UNC behind them, the Hurricanes finally got Manny Diaz’s first win as a head coach, blowing out Bethune-Cookman, 63-0. Miami isn’t lacking offensive firepower, as quarterback Jarren Williams threw for 254 yards and three touchdowns while running back DeeJay Dallas had 108 yards and three scores of his own. The Hurricanes have a chance to turn this year around with four straight games at home.

In the last eight quarters, the Orange have been outscored by a 104-26 margin. Ouch. Syracuse was ranked to start the year but has been outclassed in its two meetings with Power Five opponents thus far. Yes, Clemson is Clemson, but the Orange have played them competitively in the past years (the Tigers slipped by last year, 27-23, but were stunned in 2017 in a 27-24 loss) with less expectations. Saturday’s game against Western Michigan—a contest in which Syracuse is only favored by a touchdown—will mean a lot for Dino Babers’ squad.

Head coach Pat Narduzzi, with his team trailing No. 13 Penn State by a touchdown, made the perplexing choice to attempt a field goal (which missed) on 4th-and-Goal from the 1-yard line with less than five minutes remaining. Still, at least the Panthers hung with a ranked opponent in a 17-10 loss, and they’ll have a chance to try and pull off a win over a ranked opponent when Central Florida comes to town.

West Virginia had scored 27 points in its first two games—against James Madison and Missouri, nonetheless—before dropping 44 on the Wolfpack in handing them a 17-point defeat. It was a disheartening loss for Dave Doeren and N.C. State, which had piled up 75 total points in a pair of blowouts to start the year.

Javian Hawkins, nicknamed “PlayStation,” has been nothing short of dynamic for the Cardinals so far. The freshman is 15th in the country in rushing yards (338 yards) and only trails FSU’s Cam Akers in the ACC. Then there’s Tutu Atwell, the wideout who has racked up four touchdown catches already. With an explosive offense, the Cardinals are 2-1 after beating Western Kentucky, 38-21, despite starting quarterback Jawon Pass missing the game with a foot injury. Saturday’s game is a big one.

You can’t have a loss like that and not plummet, at least until you prove you can bounce back. The aforementioned loss to the Jayhawks was shocking for a number of reasons. Kansas had lost 48 straight road games to Power Five opponents and was just 1-52 in its last 53 road games coming in to Friday. The Eagles defense was exposed and quarterback Anthony Brown and the offense went quiet in the second half. At least AJ Dillon (27 carries, 151 yards, 1 touchdown) earned ACC Running Back of the Week honors?

A frustrating season continued for the Seminoles, as they committed four personal foul penalties in the fourth quarter of a 31-24 loss to UVA. That enabled the Cavaliers to take a lead they wouldn’t relinquish, and FSU running back Cam Akers—the conference’s leading rusher—was stopped on a run from the 4-yard line for the final play of the game. The Seminoles did look markedly better than they did the week prior against Louisiana-Monroe, though.

Why the large drop? The last two weeks have been nothing but disheartening for Hokies fans, as their team never really pulled away from Old Dominion in a 31-17 win and then had to erase a halftime deficit to Furman, an FCS opponent. Virginia Tech will have to make use of this bye week, as Justin Fuente has seen his name climb on the “Hot Seat” charts (he’s fourth), and Bud Foster’s final year as a defensive coordinator has gotten off to an ugly start.

The Yellow Jackets get a much-needed week off after a humbling defeat to The Citadel. You see, head coach Paul Johnson retired after running a triple-option attack for 11 years with Georgia Tech. His replacement, Geoff Collins, changed the offense and decided to no longer run that. The result? Paying $400,000 to lose to an FCS opponent that runs the triple-option.

The Week in Photos: 9/9 – 9/15
Eagles Rally Past Harvard in Five-Set Thriller