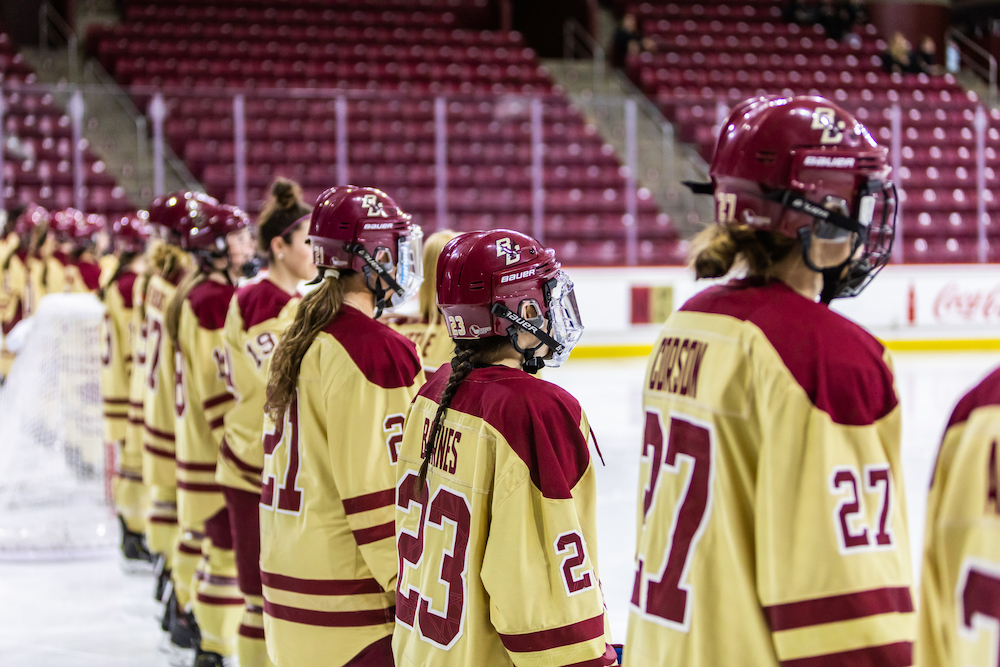 BC to Open Up Season With Exhibition Game Against PWHPA Team

Boston College women’s hockey is kicking off its season tomorrow with an exhibition against the Professional Women’s Hockey Players’ Association (PWHPA). The association was formed in May shortly after the Canadian Women’s Hockey League folded due to lack of funding.

“Our players have been working really hard this preseason, and they’re ready to to see how that pays off against the PWHPA,” head coach Katie Crowley said. “It’s great that the freshmen will get to experience a game atmosphere against a quality opponent and it’s also valuable for both the returners and newcomers that they’re going to get experience in different roles.”

This year’s Eagles team is turning the page on one of the most successful runs in program history, despite postseason disappointments the last two years. Megan Keller, Makenna Newkirk, and Kali Flanagan were all top contributors to last season’s team and have all graduated. Serena Sommerfield, Grace Bizal, and Molly Slowe have left, leaving the BC backline with plenty of spots to fill. Former Patty Kazmaier winner Darryl Watts and Caitrin Lonergan were both lost to the transfer market, leaving Eagles fans wondering who is going to pick up the scoring slack—the two combined for 244 points over the last two seasons.

Cayla Barnes will play a vital role on the back end—the redshirt freshman was also a member of the 2018 Olympic Gold Medal team, but is the last member still playing for BC. She managed 23 points last season and finished the year +9, but Crowley will be expecting Barnes to step into a much-expanded role this season.

Over 100 players, including national team stars for both Team U.S.A. and Team Canada, are leading PWHPA. Hillary Knight and Kendall Coyne-Schofield, American gold medalists at the 2018 Winter Olympics, serve as player representatives, and Canadian legends such as Shannon Sabados are also members of the association.

The PWHPA’s stated goal is to work to build a sustainable professional league for women’s hockey. Members do not want to play in the National Women’s Hockey League due to low salaries and a short season.

The association is about to begin a tour titled “The Dream Gap Tour” this weekend. The plan is for players, which are divided up into different regions, to play games and engage with various communities across the country to spread the word about the women’s game and provide playing time for its members.

Two events are taking place this weekend: A two-day showcase in Toronto and the exhibition against BC. Members of the New England region will participate in the game at Conte Forum, though rosters have not been formally announced yet.

Players listed on the PWHPA website as hailing from the New England region include seven BC alumni: Flanagan, BC ’19; Katie Burt, BC ’18; Newkirk, BC ’19; Keller, BC ’19; Toni Ann Miano, BC ’18; Haley Skarupa, BC ’16; and Meghan Grieves, BC ’16.
Flanagan was a member of the 2018 Olympic Gold team with Keller and Skarupa. Burt graduated as the all-time winningest women’s goaltender in NCAA history—one upping another PWHPA member Noora Räty. Newkirk was one of only seven two-year captains in Eagles women’s hockey history, and Miano was Hockey East Defenseman of the Year in 2018—she was a Patty Kazmaier finalist that year as well. Grieves won the Athletic Director’s Award for Academic Achievement and made Hockey East’s All-Academic team as a senior at BC.