Home » In First Year, Lowe has Orchestrated Impressive Growth for BC 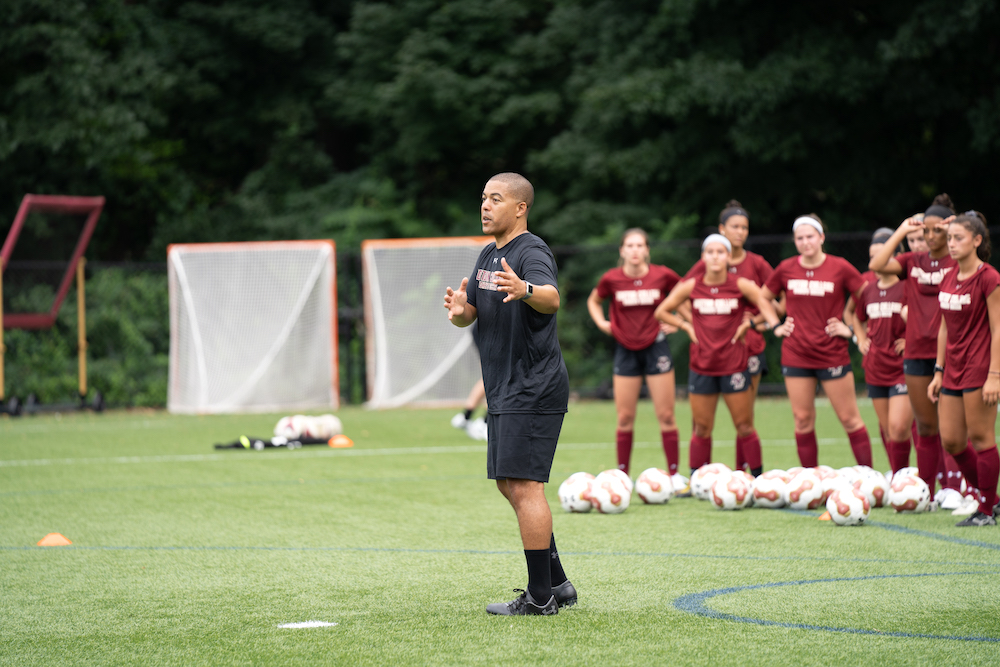 In First Year, Lowe has Orchestrated Impressive Growth for BC

In college sports, the departure of a long-tenured coach can send ripples through the program. Players transfer to different schools, recruits decommit and seek other offers, and there’s often a rebuilding year—or several—as the new head coach aims to mold the school in their style of play.

This past winter, it seemed that Boston College women’s soccer was facing a similar reckoning. The Eagles had been coached by Alison Foley for 22 years, and the 2018 campaign was a highly successful one as she guided the team to a No. 4 seed in the NCAA Tournament. But, just like that, Foley announced her resignation in mid-December. A little over a week later, star midfielder Sam Coffey—the reigning ACC Midfielder of the Year—announced that she was transferring to Penn State.

While BC had a strong incoming recruiting class, the team was losing four starters from its NCAA Tournament game, and new head coach Jason Lowe, hired by Director of Athletics Martin Jarmond in January—was coming from an assistant role at Wake Forest and had yet to oversee a team on his own. There was reason to expect a step back, even more so when Lowe lost two key contributors in forward Jenna Bike and defender and potential target forward Kayla Duran to season-ending injuries in training camp.

With those two out, the total was up to six starters missing from the team that Foley put out on the field in the first round of the NCAA Tournament. A slow start to the season would be more than understandable, especially with how much Lowe was going to have to rely on inexperienced players. Plus, there was the burden of the 2018 campaign in which the Eagles started 10-0 and went on to claim 14 wins, the most since the 2010 College Cup team.

Somehow, though, the stacked deck against Lowe hasn’t resulted in a step back. In fact, through the first nine games, the Eagles have just one loss—a one-goal defeat in a competitive, high-scoring match with No. 6 Florida State on Thursday—and have seemingly taken leaps and bounds, both in the development of individual players and in the improvement of the team’s offense and defense as a whole.

Before the setback against the Seminoles, which was a lesson in itself as the Eagles nearly erased a two-goal second half deficit, BC had gone 7-0-1 and outscored its opponents by a decisive 17-4 margin. The Eagles won both of their preseason exhibitions, rattled off seven straight victories to start the season, and strung together three shutouts during one four-game span. That more than compares to last year’s early season stretch in which BC, with more established players dotted throughout the lineup, started 9-0.

So how did Lowe find this success right off the bat? By implementing his own system, one that moved the Eagles away from the “kick and chase” style employed last year and toward a more heavy possession-based attack. Lowe wasn’t shy about talking out this last spring, when he was getting to know his roster.

“What I really want is to connect us better from the goalkeeper all the way up to the forwards and be able to dictate play a little bit better through our possession and be a little bit more dynamic,” the former Wake Forest associate head coach said back in March. “I think just playing a way that’s more sustainable and reliable throughout the season, through the ups and downs.”

A wrench was thrown into those plans when Bike (one goal, five assists in 2018) and Duran went down with injuries, but in a credit to Lowe’s ability to adapt, he shuffled the lineup and settled on freshman Sam Smith as the top player in his 4-5-1 formation. While Smith is regarded as more of an attacking midfielder then the 5-foot-10 Duran—who more fit Lowe’s idea of a true target forward—his faith in her hasn’t been misplaced.

Through nine games, Smith has seven goals, one more than Coffey had at the same point last year. The Sleepy Hollow, N.Y., native has been nothing short of phenomenal, striking twice against FSU in her most recent outing. She’s not the only player that has found success up top, though. Lowe has played Olivia Vaughn—the team’s most dangerous striker last year—up top and on the wing to the tune of four goals, while he’s also used Gianna Mitchell (yes, the same Mitchell who was the team’s star defender last year) up top.

Mitchell’s story is another example of Lowe’s adeptness as a head coach. Nursing her way back from a torn ACL, Mitchell was unable to play in the first few games before being cleared. To get her back to match fitness, Lowe slotted her up top and immediately found success. The junior scored in her second game of the year against rival Boston University despite playing just 18 minutes, then added goals against Northeastern, Providence, and FSU despite never clearing 50 minutes. Lowe could’ve moved her back, but he knows not to mess with a good thing when he has it—and that’s what the Eagles have in their back four.

Riley Lochhead and Mia Karras, two holdovers from the Foley era, have flourished in new roles under Lowe. Slotted at left and right back, respectively, the duo has combined for six assists and made the most of their freedom to push the ball up the wings in attack. Lochhead never played more than 50 minutes in a match last season and largely struggled up top, she’s now third on the team in minutes and has looked dangerous often. Karras, meanwhile, has vaulted from 210 minutes all of last year to fourth on the team and has a strong knack for the through ball. Attacking fullbacks are common across soccer, but last year Foley went with Elysa Virella and Mijke Roelfsema, and they didn’t remotely have the same freedom.

In the middle, instead of the familiar pairing of Duran and Mitchell last year, Lowe has stationed first-year defenders Michela Agresti and Sydney Moore—and the two have played excellently in front of fellow freshman goalkeeper Allie Augur. It’s not often that you see two freshmen lead the team in minutes, but it speaks to Lowe’s confidence in his freshmen, who have only truly cracked against the defending national champions. This core unit of four, none of whom entered the year with a single start under their belt, has managed to soak up Lowe’s instruction and form a back line that is able to play the ball forward, whether on runs up the side or through the midfield.

The midfield has been some of Lowe’s best work, too. Last year, it was the Coffey show, as she dominated the possession and most of her teammates looked to play through her—as you would expect with a player of her caliber. Still, it made the attack one-dimensional at times, and Lowe has been able to shuffle players around, and they’ve all largely impressed.

Jillian Jennings, Samantha Agresti, Emily Langenderfer, Gaby Careirro, and Jade Ruiters have all notched assists. The offense has been able to move the ball well in the early going—this much is clear when you look at last year’s assist-to-goal breakdown. In 2018, Coffey had 14 of her team’s 36 assists, as BC averaged 2.2 goals per game. This year, 11 different players have registered assists on 21 goals, and the team has bumped up its scoring, albeit slightly, to 2.3 goals.

This all came to a head on Thursday against the Seminoles, the Eagles’ biggest test yet. While they were dominated in shots and chances, they did hold an early lead and nearly pushed for an equalizer in the waning minutes. To hang tight—and score four goals—against an established FSU side on its home turf that was fresh off of a national championship is no small feat.

Plus, with Lowe, it seems like the loss will be the springing board for further growth. After all, the team is starting four freshmen and somehow has replicated last year’s success, even with coaching turnover, transfers, and injuries. The future under Lowe is tinted with optimism, and the worries of a 22-year head coach departing have all but faded away.