The University added paths, irrigation infrastructure, and lights ahead of the official opening to the public this fall. Although the MWRA owns the Preserve, the University funded the improvements and maintaice.

Laskey spoke first, offering a history of how the project began. He expressed that while he was initially hesitant to once again attempt to discover a useful function for this plot of land, he was incredibly pleased with how the idea turned out. Laskey then went on to thank the board of directors that had been in charge of the project. He concluded by encouraging people to relish in the beauty of the Preserve.

“I will close and just say to savor this moment,” Laskey said. “At last, it is open and it is beautiful.”

Leahy spoke afterward, first commenting on the beauty of the preserve.

“I find this almost like a small cathedral,” Leahy said. “It’s peaceful and has a sense of nature and relevance—I find it very powerful.”

“If there is one word that sticks out for me in regard to this dedication ceremony, it’s partnership,” Leahy said. “This is a moment where we see the benefits of partnership. And I think we also might reflect on what we can do in the future together with this particular institution of higher education, the Massachusetts Water Resources Authority, and the surrounding community. What opportunities are there for other ways in which we can enhance the quality of life in the commonwealth at large, but also our neighborhood in particular?”

Leahy concluded by stating the driving forces behind the completion of the project.

“This is a result of great ideas, tenacity, energy, and creativity,” Leahy said. “And we will enjoy this for years to come.” 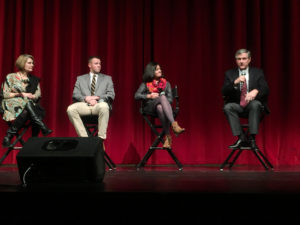