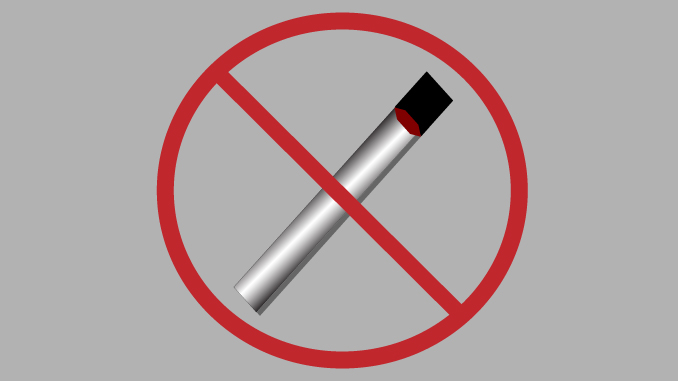 In the face of 18 deaths and 1,080 vape-related illnesses around the country, Governor Charlie Baker has ordered a four-month ban on the sale of all vape products, including those that contain tobacco and marijuana, in Massachusetts.

In declaring the epidemic a public health emergency, the ban is set to last until Jan. 25, 2020.

Massachusetts is not the only state to have banned vape products, but this ban is the harshest, while states like Rhode Island, Michigan, have banned only flavored pods and e-cigarettes. A New York court blocked a state ban on the sale of flavored e-cigarettes on Oct. 3. The case will now move up to the Supreme Court in Albany where the Vapor Technology Association will have a chance to argue for a preliminary injunction on the ban.

The Baker administration claimed that the biggest factor in pushing for the four-month ban is so that proper research can be conducted in order to determine what chemicals in these vape products are causing disease among such a growing number of individuals.

While many individuals are praising the governor for his swift action, I question if this ban was the most effective way to approach the issue.

As stated in The Heights’ editorial last week, with such an all encompassing ban, most vape businesses in Massachusetts, such as Vape Daddy’s, Luxe Vapours, and Beyond Vape, will be unable to sell the majority of their products, and thus will most likely have to shut down in the upcoming weeks.

In other words, people will lose their jobs.

And this is not a small number of people either. The Vapor Technology Association estimates that about 924 individuals are employed by vape stores in Massachusetts. The majority of these vape shops are small businesses and the direct owners and employees will be immediately affected.

As the ban was passed so quickly, these vape stores have been completely blindsided. They had no time to prepare for the prohibition or stock alternative products to sell.

And what is the government doing to help these struggling business owners? As of right now, nothing.

This begs the question, does the ban reach too far?

Current research on these vape-related illnesses have found that most of these cases have resulted from individuals smoking black market THC marijuana (tetrahydrocannabinol) pods, not legally bought vape products.

In a recent report, the Center for Disease Control and Prevention said that “the latest national and regional findings suggest products with THC play a role in the outbreak.”

They’ve also concluded that only about 16 percent of patients exclusively use products that contain nicotine. And, ironically, now that legal vape options have been banned, individuals will most likely turn to these harmful black market products.

Then we’ll have a bigger problem on our hands.

At the very least, individuals will travel to other states to get their vape fix. In fact, several New Hampshire vape stores that border Massachusetts have reported that they’ve seen a boost in sales since the ban has taken place.

In light of this research, the Vapor Technology Association, along with several other vape stores, have filed a joint lawsuit against the ban, stating that it “makes no distinction between the black-market vaping products at the center of [the] outbreak and the FDA-regulated products produced by legitimate manufacturers.”

I might also suggest that several of these cases could be due to the fact that many individuals have a predisposition to lung issues that were just onset by vaporizers and vape products. Moreover, in completely banning vape products, the government is taking away a legal alternative for cigarette smokers who are attempting to quit tobacco use.

Many individuals use vape products to satisfy their nicotine addictions without having to smoke cigarettes. Now, with such vape products being banned, individuals may be more inclined to return to cigarettes, which, may I remind you, have been certifiably declared unhealthy by medical professionals since the 1960s.

All that being said, I do still think that it is important to get to the bottom of what exactly is causing these deaths and illnesses, whether it be legitimate vape products or not. It is also critical to get vape products, of any kind, out of the hands of minors.

Perhaps a ban on all vape products could be enforced for a single month, and then slowly pushed back to allow the sale of more products as researchers find conclusive evidence as to what exactly is causing these illnesses.

If the Massachusetts government wishes to keep its four-month ban on these products, then I propose that they consider compensating vape businesses that are going to be hurt by this legislation. It’s only fair.