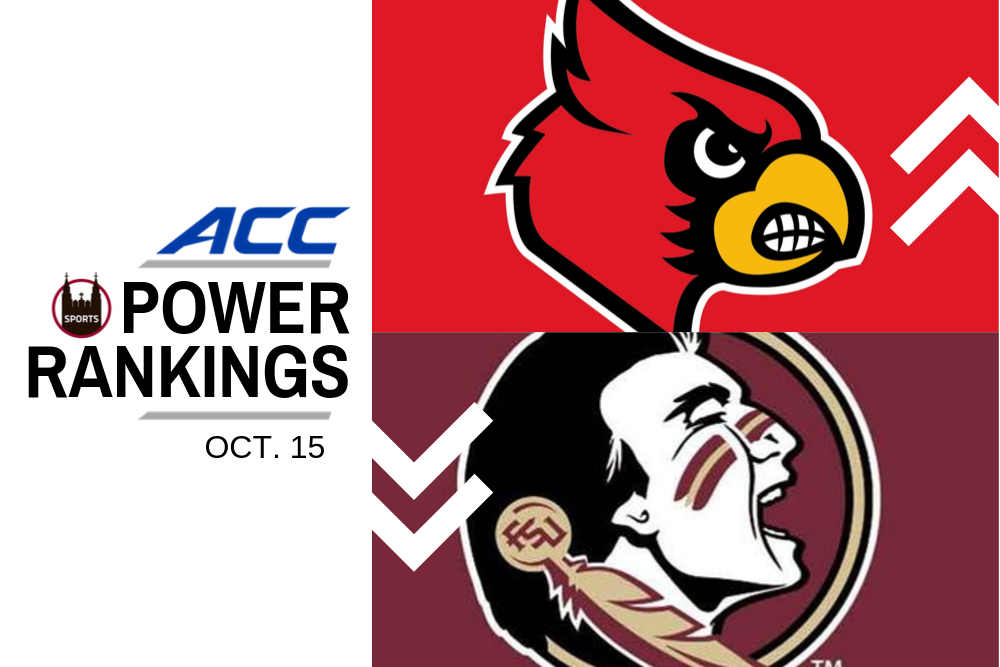 Once again, it’s Clemson and everybody else. After Virginia’s offense put up a stinker against Miami, and Wake Forest lost an utterly wild game to Louisville in what’s sure to be one of the contests of the season, the Tigers are now the only unbeaten—and only ranked—team in the ACC. For any outside observers, the conference is an entertaining mess, as 11 of the 14 teams have either three or four wins, and seemingly no one wants to grab control of the Coastal division. So without further ado, let’s take a shot at sifting through the chaos and jump into this week’s ACC Power Rankings.

After an unconvincing performance against North Carolina, the Tigers made a statement against hapless Florida State, jumping out to a 42-0 lead and winning, 45-14. Trevor Lawrence threw for three touchdown passes while a resurgent defense held the Seminoles to just 253 total yards. The Tigers look like a playoff contender, and the runaway best team in the conference.

It had to happen eventually. Despite a heroic relief performance from Sam Hartman—who threw for 172 yards and two touchdowns in relief of an injured Jamie Newman—the Demon Deacons finally found themselves on the wrong side of a close game, losing, 62-59, to a surging Louisville team. Wake Forest’s offense racked up 668 yards, more than enough to fend off the feisty Cardinals, but questions have to be asked of both the defense and special teams, which allowed a kickoff return touchdown and a 50-yard punt return that set up a Louisville touchdown.

After erupting for 62 points against the Demon Deacons, the Cardinals now have 103 points in their past two games, and it doesn’t seem to matter who is at quarterback. Micale Cunningham and true freshman Evan Conley both threw for two touchdowns against Wake Forest, and Louisville now seems to have a capable starter and backup despite the fact that Week 1 starter Jawon Pass is now out for the season with a toe injury. Credit to head coach Scott Satterfield, who has done a remarkable job turning the Cardinals around in his first season on the job.

The bye week couldn’t have come at a better time for the Panthers, who are currently plagued by injuries to key contributors including defensive back Jason Pinnock and running backs A.J. Davis and Vincent Davis. Pat Narduzzi didn’t comment on their statuses at his weekly press conference Monday but sounded slightly more hopeful that linebackers Chase Pine and Elias Reynolds would be available ahead of a Friday night trip to the Carrier Dome.

The Cavaliers managed to get inside the Miami 30-yard line on six separate drives but somehow left with only nine total points in a demoralizing 17-9 defeat against the Hurricanes and their 18th-ranked defense. To make matters worse for UVA, it lost preseason All-American cornerback Bryce Hall, who led the country in pass breakups last year with 22, to a season-ending ankle injury.

After a solid win over Georgia Tech removed some of the sting of losing to Clemson by just one point, the Tar Heels also got a bye week to refocus and prepare for a back half of the schedule that contains six eminently winnable games. The ACC Coastal is firmly within UNC’s grasp, should it emerge from a two-game stretch that contains a home game against UVA and a road trip to Pittsburgh with a pair of wins. Even if it doesn’t accomplish that, it’s undeniable that Mack Brown has the Tar Heels moving in the right direction.

The Blue Devils rebounded from a defeat against the Panthers with a 41-23 drubbing of a defunct Georgia Tech team, one that featured them scoring on their first five possessions. Duke has a concerning trend of playing well for only one half of games—it scored just three points after halftime against the Yellow Jackets, and fell behind Pittsburgh, 19-3, after one half two weeks ago—but for now, the Blue Devils are two games above .500 and firmly in the mix in the ACC Coastal, though that could be said about every team but Georgia Tech.

Needing a win over then-No. 20 UVA to avoid its first 0-3 start in conference play ever (yes, ever), the Hurricanes’ defense rose to the challenge, limiting Bryce Perkins and the Cavaliers to just nine points in a win that got Miami back to .500. An unsung hero for the Hurricanes? Kicker Turner Davidson, who earned the starting job for the night in warmups before the game, then nailed three field goals.

After dragging down Syracuse quarterback Tommy DeVito eight times in a 16-10 Thursday night win, the Wolfpack defense has now recorded eight sacks in two consecutive games. N.C. State’s dominant defense, which is also allowing just 66.7 rushing yards per game, will have to continue to play at that level for the Wolfpack to stay competitive. Bailey Hockman, who replaced Matthew McKay as N.C. State’s starting quarterback, completed just 59 percent of his passes for 205 yards and no touchdowns against the Orange.

The bye week brought some bad news for Eagles fans, as it was announced Monday that Anthony Brown has been ruled out for the season with a lower left leg injury ahead of a Homecoming weekend contest against the Wolfpack. With Brown’s injury and a porous defense that has allowed over 500 yards in consecutive games, it’ll be difficult to expect much of BC going forward. That said, Dennis Grosel did flash some potential in relief of Brown against Louisville.

For the second straight season, the Seminoles were absolutely crushed by Clemson, though at least this time FSU “only” lost by 31 points instead of 49. FSU turned the ball over four times, and star running back Cam Akers was limited to just 34 yards on nine carries. It doesn’t get any easier for the Seminoles either, as a trip to Winston-Salem, N.C., to take on Wake Forest’s explosive offense looms on the horizon.

Sure, the Hokies beat Rhode Island, 34-17, to move to 4-2 on the season. The Rams also have losses to New Hampshire and Stony Brook this season, though, so a closer-than-expected victory in which Virginia Tech led just 24-17 going into the fourth quarter won’t exactly cool the hot seat that head coach Justin Fuente is sitting on. At the very least, new starting quarterback Hendon Hooker is now 2-0 as the Hokies’ primary signal-caller, and with the added threat of his legs, Virginia Tech’s offense has looked slightly more dynamic the past two weeks.

The Orange has done nothing but disappoint this season after being picked to finish second in the Atlantic in the preseason ACC poll. The Orange is the only team in its division without a win in conference play and looked discombobulated for the better part of three quarters on offense against the Wolfpack before scoring 10 points in the last 16 minutes. No offense to DeVito, but it’s clear that Syracuse misses the dual threat of Eric Dungey mightily.

On their first drive of the game against the Blue Devils, the Yellow Jackets went 75 yards on 11 plays and scored to go up, 7-0. That was as good as it got for Georgia Tech, which went on to trail, 38-7, at halftime. New head coach Geoff Collins is clearly at the head of a full-scale rebuild, and as of right now, it’s not an exaggeration to say that the Yellow Jackets might have to wait until 2020 for their next win.