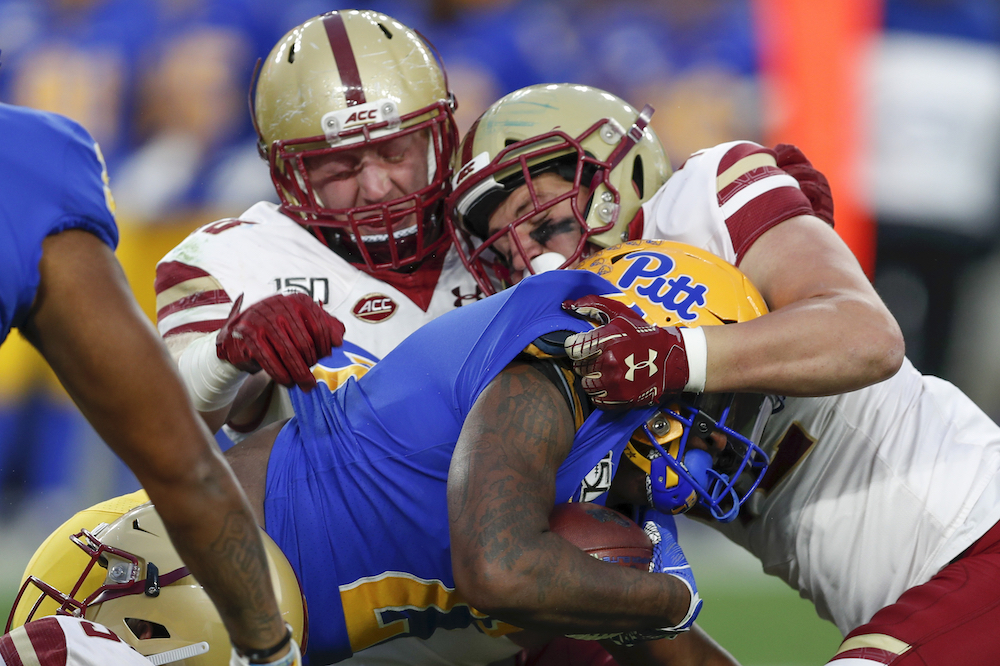 Despite installing a new defensive coordinator at the start of the year, Boston College football has suffered through a plethora of breakdowns and miscues on defense throughout this season. The Eagles entered Saturday afternoon’s must-win game against Pittsburgh with one of the ACC’s worst defenses and were coming off a loss to Notre Dame where they surrendered 40 points.

Against the Panthers, though, the Eagles looked like a brand new team on defense. BC forced four turnovers and bent but largely didn’t break throughout the afternoon, surrendering a lone rushing touchdown but otherwise turning in its best effort of the year. The Eagles paired that with a strong rushing game against the ACC’s top running defense and, with a 26-19 win, became bowl-eligible for the sixth time in seven seasons under head coach Steve Addazio.

BC (6-6, 4-4 Atlantic Coast) leaned on running back AJ Dillon, as he took 32 carries for 178 yards and a score. It didn’t seem to matter that the Panthers (7-5, 4-4) entered holding opponents to less than 100 rushing yards per game, as Dillon was at his best in breaking tackles and even pulled away for a 61-yard score in the third quarter that gave the Eagles the lead for good. When BC wanted to drain the clock at the end of the game, it just handed the ball to Dillon, and he took eight straight carries and totaled 47 grueling yards.

He was balanced out by quarterback Dennis Grosel, who ran for 51 yards and, despite going just 9-of-19 through the air, totaled 123 yards and a touchdown. Kicker Aaron Boumerhi, who entered just 8-of-13 on field goal attempts, was called upon four separate times and nailed all four of them. It was a strong showing from the Temple transfer, as he was the first to go 4-for-4 in a game since much-celebrated former BC kicker Nate Freese back in 2011.

Pitt quarterback Kenny Pickett was effective throughout, completing 30-of-40 attempts for 323 yards, but the Panthers were undone by turnovers. Pitt fumbled three separate times, and then miscommunication with a wide receiver led to a Pickett interception. Those turnovers led to 12 points for the Eagles, and that proved to be more than the difference in the inter-division matchup. Pickett was also sacked four times by a BC front that entered with just 12 in its previous 11 games.

The defensive effort was impressive. Isaiah McDuffie, back to full health after missing the bulk of the season, racked up 10 tackles, two sacks, and two tackles for loss. Tanner Karafa had a sack and not one but two fumble recoveries, while Marcus Valdez forced a fumble when he leveled Pickett for a second-quarter strip sack. Players who have struggled to make tackles or get pressure stepped up left and right, whether it was Nolan Borgersen with a key pass breakup in the end zone or Jahmin Muse with an interception.

The game started with a pair of three-and-outs, then Pitt’s second drive started ingloriously when linebacker Vinny DePalma poked the ball out from Panthers’ wideout Jared Wayne—and that turned into a 29-yard field goal from Boumerhi. Then, the same thing happened on Pitt’s second play of the following drive, with a botched handoff between Pickett and Vincent Davis resulting in a fumble recovery for Karafa and a 32-yard field goal from Boumerhi.

Pitt finally found consistency on offense and embarked on an 11-play, 70-yard drive that was capped off by a 23-yard field goal from Alex Kessman. Pickett very nearly found tight end Will Cragg in the back of the end zone for a go-ahead touchdown, but Borgersen came diving in to bat it away. BC had an answer with its best drive of the game, as Grosel converted a pair of third downs with passes to Zay Flowers and Kobay White before sneaking for a first down in 4th-and-1. Then, with Pitt selling out to stop the run, the Eagles went with a play-action call, and Grosel was able to find a wide-open Hunter Long for a 25-yard touchdown.

Pitt drove down the field but yet again were stood up in the red zone by BC’s resilient defense. Kessman buried a 35-yard field goal, then was called upon again right before halftime to knock in a 48-yarder. That one—which cut the Eagles’ lead to four—was set up by a beautiful drive from Pickett, who completed back-to-back passes to Maurice Ffrench for a combined 34 yards.

The Panthers went three-and-out to start the second half, but then forced a punt with their first sack of the game—which was surprising, as they entered with a nation-best 48. On the very next play from scrimmage, Davis took a direct snap in a wildcat formation and ran up the gut for a 39-yard touchdown, giving Pitt its first lead of the game at 16-13.

Three plays later, Dillon was running into the end zone after a 61-yard sprint, and BC never trailed from there. Muse’s interception stopped a promising Pitt drive and set up another Boumerhi field goal following a methodical six-minute drive. Another Panthers’ fumble—this one from A.J. Davis—was followed by Boumerhi sinking his fourth field goal, this one from a comfortable 30 yards. Kessman tacked on a late field goal for the hosts, but Dillon singlehandedly ran out the clock to ensure that the Eagles reach another bowl under Addazio.

It was a gutsy effort from BC, who entered as nine-point road underdogs but leaned on a surprisingly resilient defense and arguably the best running back in program history to snap a two-game skid. Rumors were flying around Addazio’s status, but after giving a heartfelt postgame interview, he was greeted immediately by a beaming Martin Jarmond. The Eagles, once again, have a chance to hit seven wins under Addazio, and they await their bowl assignment, which will be announced on Dec. 8.