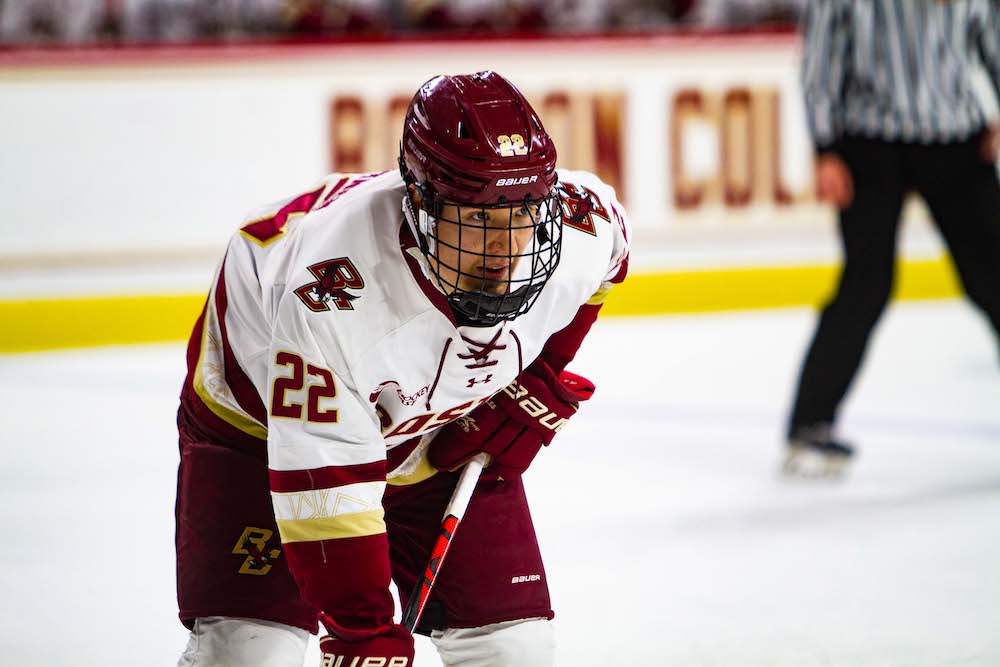 Eagles Use Momentum to Complete Comeback, Upset Harvard at Home

Harvard men’s hockey entered a sold-out Bright-Landry Hockey Center on the evening of Black Friday touting an undefeated record thus far in its season. The same could not be said of the squad after a quick visit from the Eagles.

No. 12 Boston College men’s hockey (9-4-0, 5-2-0 Hockey East) put their impressive six-game winning streak to the test, for the team needed a win to prove its legitimacy. Needless to say, the Eagles did not back down from the challenge, as that streak improved to seven games after a hard-fought 4-2 victory over the No. 6 Crimson (6-1-0, 6-0-0 ECAC).

Both teams entered the matchup riding high, sharing a tie for the third-longest unbeaten streak in NCAA hockey. The Eagles, however, stuck to the style of play that has brought them their recent success––scoring goals quicker than their opponents can even react.

The first frame of play proved to be uncharacteristically quiet for both fast-paced and high-scoring offenses. The Eagles struggled with puck control and could not seem to develop any type of rhythm in front of the Crimson goal, generating a disappointing three shots on frame in the first period. Harvard took advantage of this lackluster performance through the stick of Jack Badini. Henry Bowlby flung a weak puck that bounced off Eagles netminder Spencer Knight, giving Badini a perfectly placed rebound that slid under Knight’s pads.

The second period, on the other hand, told a much different story. As opposed to the 11 combined shots from the first, this frame saw the two squads exchange back-and-forth opportunities all period long.

The first goal came on a Harvard power play from Jack Drury, who made a nifty show of stick handling as he cut quickly to his forehand in front of Knight and buried the puck just inside the left post.

The Eagles wasted no time at all, quite literally, responding to the Crimson goal exactly 20 seconds later. Following the center ice face-off immediately, Logan Hutsko sent a shot-pass into the slot that Aapeli Räsänen redirected into the right corner of the net––a skillful play made by two familiar faces to the scoring sheet to bring the Eagles back within one goal.

Räsänen, coming off a prolific performance against Yale, earned his fifth multipoint game of the season and continued to display just how much the Eagles rely on him as a playmaker.

That goal was all BC needed to break the floodgates.

The next two goals flew past Crimson goaltender Cameron Gornet before any member of his team could make any type of adjustment. The first came just over a minute after the first, as Mike Hardman flung a puck that took a perfect bounce off Gornet’s pads and into a well-positioned one-time shot from Alex Newhook.

The next, once again coming just over a minute later, was a David Cotton dangle with thanks to a Julius Mattila pass from the left circle. The senior juked out Gornet, beating him with a forehand to the goaltender’s blocker side.

Yes, you read that correctly––BC tallied three unanswered goals in a span of just 1:52 at the close of the middle frame, but the fact that this wasn’t an isolated occurrence for the Eagles made it that much more impressive.

The Eagles have won plenty of games this season through quick goal scoring—very, very quick goal scoring. Through its past six contests alone, BC has seen two or more pucks find the net within five minutes of each other seven different times. The Eagles added an eighth occasion to that list after their fast-paced finish to the second period proved to be the difference-maker in a contest between these two Boston powerhouse programs.

Following the season-long trend of taking advantage when momentum sways in their favor, the Eagles gave themselves a lead that the Crimson couldn’t react to. Throughout the third frame, the BC penalty kill unit went 3-for-3 in protection of the lead and even tallied a shorthanded goal, its fourth of the year. Patrick Giles powered through the neutral zone and fired a low shot from the left wing, allowing Marc McLaughlin to drive the puck on his backhand right into the net.

BC’s dominant puck control even denied Harvard the chance to pull its goaltender at the close of regulation. The Crimson simply could not stop the high-flying Eagles.

The Eagles look to tack an eighth and ninth win to their streak as they face No. 5 Notre Dame in a home-and-home series next weekend.