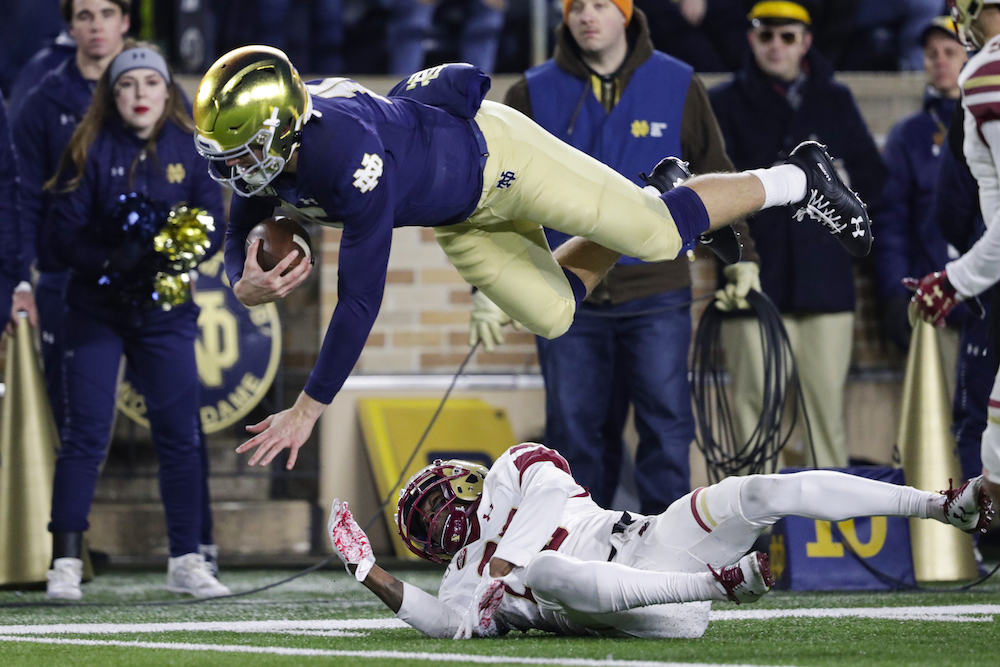 Notre Dame backup quarterback Phil Jurkovec is transferring to Boston College, according to BC Maven on Sports Illustrated. Three-year starting quarterback Anthony Brown entered the transfer portal last month, but he has yet to announce where he will end up come next season.

Coming out of high school, Jurkovec was rated as the No. 83 recruit in the country and the No. 4 dual-threat quarterback, per 247Sports. But Jurkovec barely saw playing time when he joined the Fighting Irish, competing with the likes of Ian Book and Brandon Wimbush in South Bend.

Jurkovec played two games his freshman year, making his debut in Notre Dame’s 56-27 win over Wake Forest. While Jurkovec participated in the game, he went 0-2 passing on his plays, with Book making the vast majority of the plays.

After his less than stellar freshman season, Jurkovec came back for his sophomore campaign ready to make a bigger impact. The backup QB played in more games, making 12 of 16 passes and securing two touchdowns on the season.

Jurkovec entered the transfer portal on Wednesday, leaving South Bend after his two seasons with the Fighting Irish, and it didn’t take long for him to find a new home in Chestnut Hill. In order to play in the 2020 season, however, Jurkovec will need to receive a waiver from the NCAA to be immediately eligible for play. And when he does become eligible, Jurkovec will be in the running for the starting quarterback for the Eagles.

247Sports published a story on Friday saying that Jurkovec would be visiting BC. BC football’s Twitter account, along with the coaching staff, began tweeting out cryptic messages on Saturday. First came this tweet from BC recruiting coordinator, Joe Sullivan:

Sullivan’s message was shortly followed by this tweet from Hafley:

Hafley’s message was quickly retweeted by Jurkovec himself.

After Brown’s announcement that he was entering the transfer portal, there was much speculation regarding who would replace him as BC’s starting quarterback. While the QB had missed a large portion of the season following an injury in the Eagles’ loss to Louisville in October, he remained an important leader on the team.

BC relied on sophomore Dennis Grosel in Brown’s absence, but he had not seen game action prior to this season. In his eight games playing and seven starts, Grosel led the Eagles to a 3-5 record, including blowout losses to Clemson, Notre Dame, and Cincinnati.