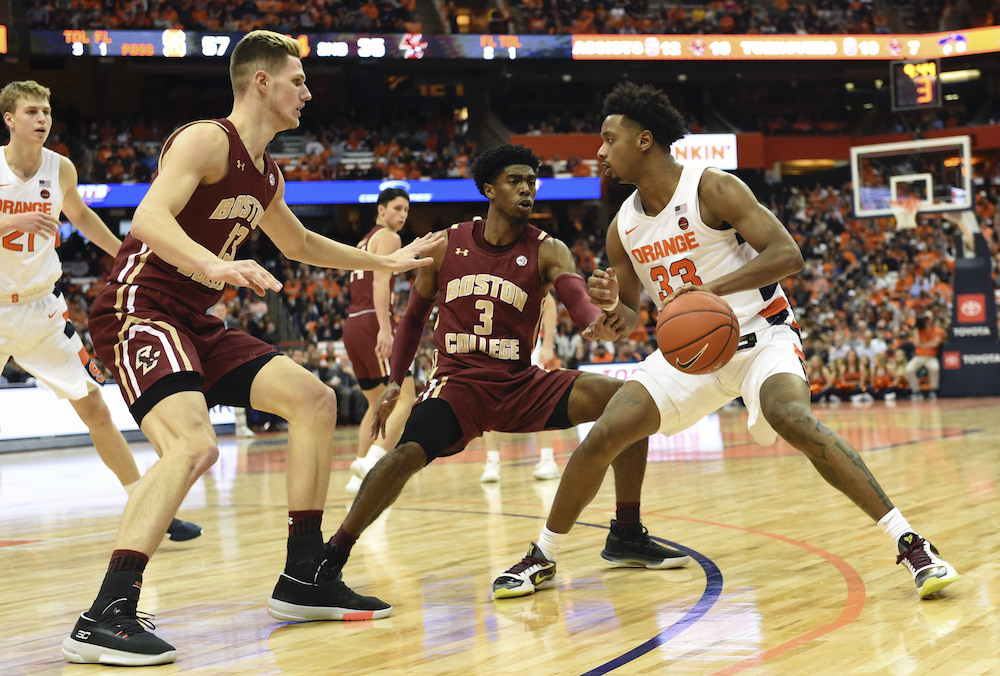 With three minutes left in the first half, Jared Hamilton found himself trapped outside the 3-point arc by Syracuse’s swarming zone defense, desperately looking for an open teammate. He eventually forced a misguided pass in the direction of Steffon Mitchell, who had to dive and heave the ball toward the Syracuse end to avoid a backcourt violation. The loose ball was promptly picked up by Syracuse forward Elijah Hughes and slammed for a thunderous dunk.

Despite last Saturday’s defeat at the hands of Georgia Tech, BC had still won five of its last seven games and is only a week removed from its thrilling victory against then-No. 18 Virginia. The team that showed up to Syracuse was more akin to the group that was crushed by Georgia Tech than the one that shocked UVA.

Even the 26-point margin of defeat does not do justice to the beating the Eagles took on Wednesday night. It took BC until the 12th minute of the first half to score more than one point, and it trailed 38-13 at halftime.

BC has struggled to shoot 3-pointers all season, ranking 305th among D1 teams in 3-point shooting percentage, according to NCAA.com, and nothing changed against Syracuse.

The Orange’s game plan was centered around forcing BC into shooting from long distance. ’Cuse stayed in its vaunted zone defense for most of the game and made it clear that it was content to let BC’s shooters take as many contested 3-pointers as it wanted.

The Eagles seemed happy to oblige but connected on just 6-of-30 from deep. All of the six makes came in the second half, when the outcome of the game was already a foregone conclusion. At halftime, BC’s shooters had totaled zero makes on 19 attempts.

The significance of center Nik Popovic’s continued absence due to a back injury was painfully clear. Stretch five CJ Felder took over Popovic’s court time, but despite his relentless efforts, Popovic’s presence in the paint was obvious. Neither Felder nor Steffon Mitchell were able to put any consistent pressure on Syracuse from the post or the baseline.

Unconcerned by BC’s inside presence, Syracuse put all its energy into controlling BC on the outside. The Eagles settled for contested shot after contested shot from behind the arc, and their few drives to the rim often came up empty. As a result, BC only managed to get to the line four times and shot 4-8 on foul attempts.

While BC’s 3-pointers fell short and its offense floundered, Syracuse produced a stellar shooting performance. Led by its starters, the Orange shot 51.9 percent from the field and 44.4 percent from deep. Guard Buddy Boeheim finished the game with 22 points on 9-17 shooting, and forward Elijah Hughes added another 19 tallies. Joe Girard III knocked down three triples to round out the Orange’s top scorers.

No Eagle reached double digits in scoring. Felder and Jairus Hamilton led the team with nine points apiece, and Felder grabbed nine boards. Bench performances were the only bright spot of the night for BC, as both Julian Rishwain and seldom-utilized Chris Herren Jr. made a pair of 3-pointers.

The Eagles will have to go back to the drawing board as they look to rebound in continuous ACC play over the coming weeks. With Popovic out for the foreseeable future, the Eagles have a gap to fill beneath the rim.

BC Partners With Low-Income Recruitment Organization
Update: Students Write Tributes to Wolfman After His Death