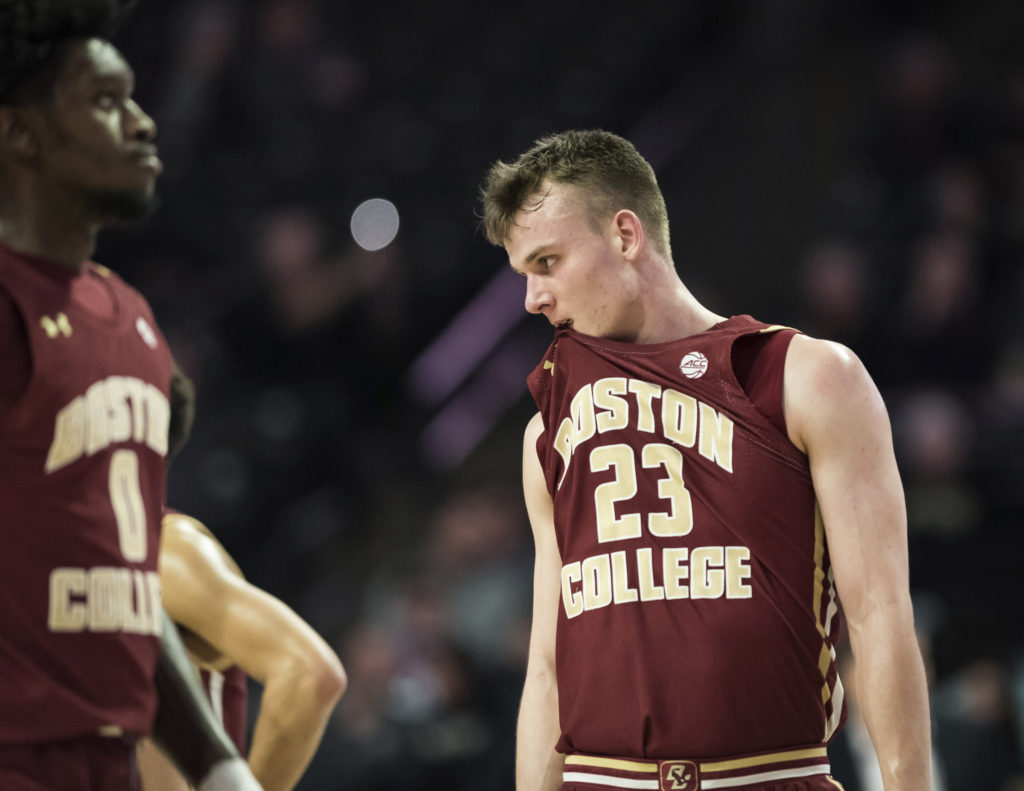 Since Boston College men’s basketball’s season-defining victory over then-No. 18 Virginia, the Eagles have struggled to connect on offense, leading to three straight losses. Two games in a row, the Eagles tallied under 55 points, and Sunday’s game against ACC rival Wake Forest told a very similar story.

Though the Eagles’ (9-9, 3-4 Atlantic Coast) offense was quiet overall, the top scorers came out to play nonetheless, and guard Derryck Thornton’s team-high 15 points was his first double-digit effort since BC’s win over Cal back in December. He also notched three rebounds, three assists, and two steals.

Just three players reached double digits on the night, and the Eagles’ attack was too little to take down the Demon Deacons (9-8, 2-5). Jay Heath notched 14, and CJ Felder netted 10 points to round out the Eagles’ top three. Wake, on the other hand, had four players in the double digits, including a standout 20-point performance from Brandon Childress to lead the Deacons.

As a result of Nik Popovic’s back injury, the Eagles tested out a new starting lineup featuring Luka Kraljevic in his first career start. After a four-point, four-rebound performance, he fouled out 20 minutes into the game.

The Eagles started off slow from behind the arc, going 0-9 from distance until Kamari Williams drilled one with seven minutes left in the first half. Because of the slow start, the Eagles still trailed by six after Williams added three points to the tally.

Though the game ended up at a lopsided 80-62 margin in favor of Wake, it didn’t seem like a runaway at first. With three minutes left in the first period, Andrew Kenny drilled his first collegiate 3-pointer to bring the Eagles back within two. Then, a pair of free throws from Jairus Hamilton tied the game up, but that was the closest the Eagles would get.

Wake came out firing in the second half, and the Deacons nailed their first three field goals of the half, including two from behind the arc. They then went on a 13-0 run to take a 20-point lead over BC, and though the Eagles tried, they struggled the rest of the game to cut such a huge deficit.

The Eagles were also below their season average in points per game by two points, which is a testament to their offensive struggles so far this year. Jim Christian’s squad has been working on improving shooting percentages all year but has yet to show any marked improvement.

A major strength for the Eagles in Sunday’s game, however, was forcing turnovers. BC notched 21 points off turnovers, more than a third of its total tally. The Eagles forced the Deacons to cough up the ball 16 times, including seven steals, which helped give the offense a chance when the game looked like a runaway.

With more conference play coming up for the Eagles, they will have to figure out how to improve their connection of offense while maintaining a strong defensive mentality. The Eagles will have to continue to capitalize on turnovers if they want to have a chance in ACC standings before the postseason arrives.