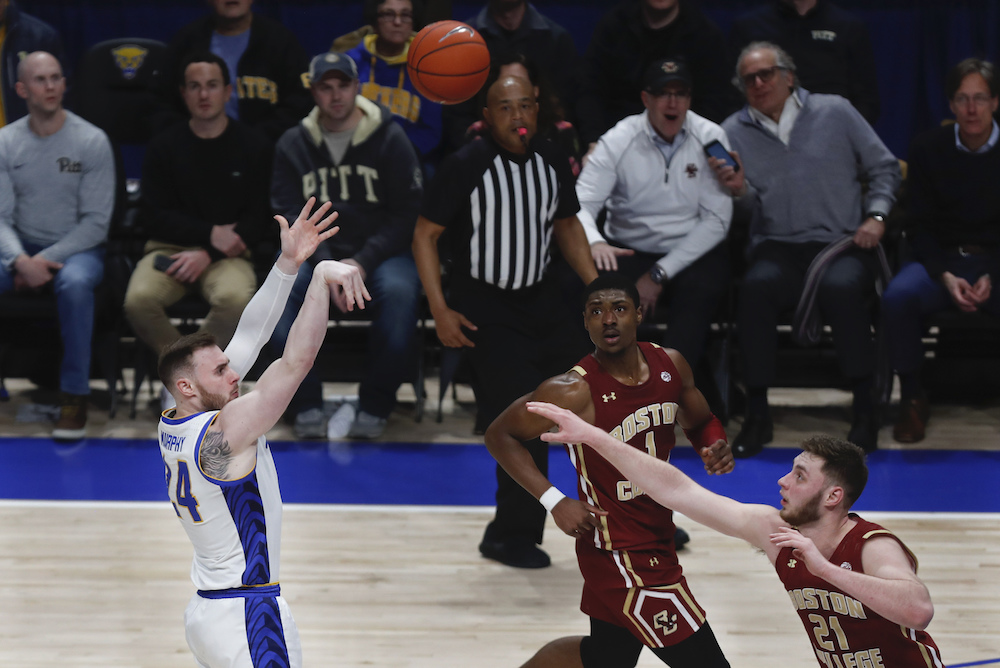 With the clock winding down and only four seconds remaining, Ryan Murphy of Pittsburgh nailed a pull-up jumper as everyone in the crowd sat on the edge of their seats. With the game tied at 72, Murphy’s score was the go-ahead shot to hand the Panthers a 74-72 win over Boston College men’s basketball. In a wild back-and-forth contest, the Eagles, now reeling off a four-game losing streak, are still left searching for consistency midway through the season.

After Murphy gave Pitt (13-6, 4-4 Atlantic Coast) the lead, BC (9-10, 3-5) had three seconds to inbound the ball and get it all the way down the court, but Pitt’s Justin Champagnie intercepted a rogue pass to seal the win.

Though the Eagles lost by a slim margin, it took a pair of back-to-back steals turned into layups for Derryck Thornton to bring the Eagles even within firing range, and they had been struggling to keep Pitt within reach for most of the second half.

The Eagles surged to a hot start from the first minute. After leading by one point five minutes into the game, BC went on an explosive 9-0 run. Both Jay Heath and Julian Rishwain led the charge, collectively hitting on three consecutive 3-point shots. Pittsburgh quickly called for a timeout while trailing 21-11 in order to try to get back in the game.

After another 3-pointer from Rishwain, BC led by as many as 14 points in the first half.

It was with this comfortable lead, however, that things started to turn. The Eagles failed to close out the final minutes of the half with any sort of intensity and struggled with shooting. Pitt, on the other hand, was able to salvage its chances with a rapid sequence of nine unanswered points. After what seemed like it would be an easy win for BC in the early minutes of the game, the Eagles somehow only held a five-point lead going into the half.

In the second half, the same pattern of back-and-forth competition continued. Pitt opened play with a monstrous dunk by Trey McGowens, followed by a thunderous put-back dunk by Champagnie on its ensuing offensive possession. The Panther crowd went crazy as it watched its team shine on a commanding 19-2 run. At the four-minute mark, Pitt held its largest lead of the game, 65-55.

The Eagles would not relent, however, and in the final few minutes of the game, BC exploded on a 13-6 run. Steffon Mitchell’s jumper made it a three-point contest with only a minute left. Due to high intensity on the defensive end, Pitt coughed the ball up twice in its two final offensive drives in the final minute.

Thornton’s quick layup, followed by Jarius Hamilton’s steal with only 27 seconds left, gave the Eagles a fighting chance. After Hamilton’s interception, BC had a critical offensive possession to tie the game, and Thornton connected on a second layup with a mere 12 seconds to go.

But following the pattern of the game, the tide would turn again in the final 10 seconds. The Panthers broke BC’s defensive pressure and hit an electric game winner with only four seconds to play.

Despite the loss, the Eagles highlighted many impressive individual performances. Heath controlled the scoring for BC, tallying 16 points in total. And for the first time all season, five other BC players scored in double figures, rounding out an impressively balanced offensive attack on the night.

Still, after four consecutive losses, BC is starting to completely lose its fire on what feels like an already-lost year. In a season plagued with inconsistency from the start, the last thing BC needed was to add to its losing streak. This streak is especially strange coming after what many thought of as a season-turning victory against then-No. 18 Virginia weeks ago.

As BC gets ready to host Virginia Tech on Saturday, there are still some positives to take away from Wednesday’s loss. For one, at the outset, the Eagles were able to hang with a solid Pitt team and even held a commanding lead toward the end of the first half. Without one star scorer, BC must be able to build off the effective, balanced offensive identity it found against Pitt. With some more quality control at the end of the first half, the Eagles could have easily ended their skid on Wednesday night.