Home » 2020 Beanpot Preview: BC Will Take on BU in Opener 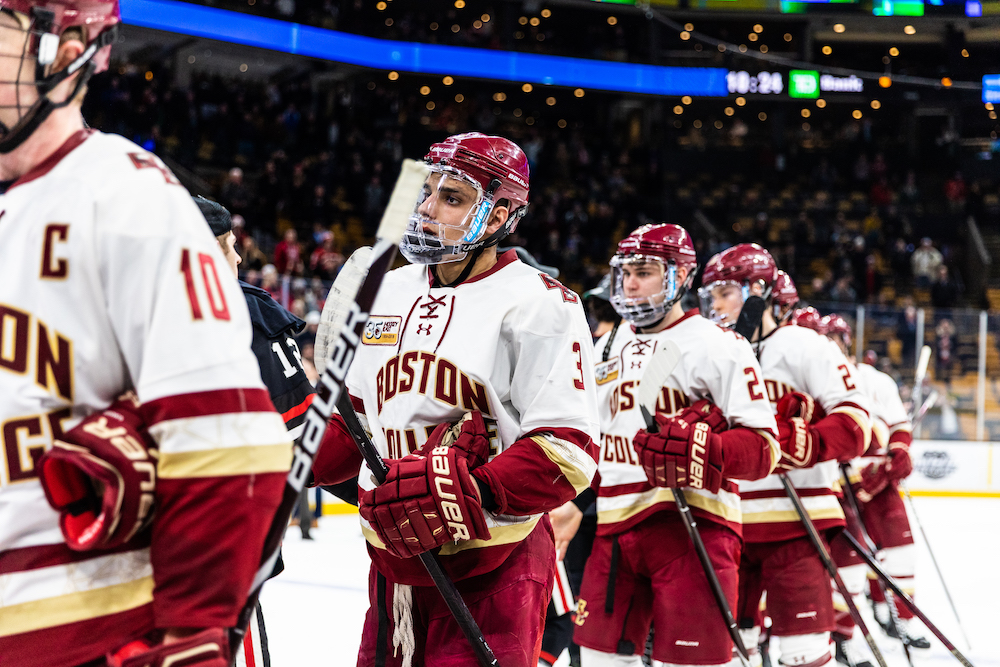 2020 Beanpot Preview: BC Will Take on BU in Opener

First Round: Boston College vs. Boston University, Feb. 3 at 8 p.m.

Heading into Boston’s biggest hockey tournament, BC men’s hockey is right where it wants to be: tied for first in Hockey East, No. 5 in the nation, and most importantly, well ahead of any of the other Boston area schools in either ranking. After three straight disappointing Beanpot finishes, things are looking up for the team from Chestnut Hill.

The last three Beanpots have brought two consolation games and a loss in the finals for the Eagles, so BC fans are in search of a miraculous finish reminiscent of Alex Tuch’s game-winning overtime goal in 2016.

It’s been a mixed bag the last few years for the Eagles against Boston teams, but something about this season is different. BC has already beaten BU and Harvard one time apiece this year, and the excitement for the Beanpot has been building all year, especially after a comeback 4-2 win over the Crimson early in the season.

And if the energy in Conte Forum for last month’s Battle of Comm. Ave. is any indication, the Eagles will have plenty of support heading into their first matchup of the year in TD Garden. BC will take on BU once again in the first round of this year’s Beanpot, and though BU is unranked nationally, the Terriers will no doubt put up quite a fight.

Harvard and Northeastern will open the tournament, and the Eagles will face off against the Terriers on Monday at 8 p.m. in TD Garden.

The Eagles have only faced BU one time this year, and despite the home-ice advantage, BC edged out a narrow victory at 4-3. For the first round of the Beanpot, the BU fan section will have fewer miles to travel, and the Terrier faithful are sure to show up in hordes. The average attendance in BU’s home rink has reached just over 2,000 so far this season, which is an impressive number and good for the 27th highest average attendance in the country.

BC, on the other hand, sits at No. 5 in that same category, a testament to Eagles fans’ expectation of good game after good game in Conte Forum.

Hutsko has had a breakout junior season, recording a team-high 15 goals, two of which came at crucial times in the Eagles’ 4-3 win over BU in January. Hutsko’s 15 goals this season have already surpassed his career high of 12, which he scored in his freshman season. A power play goal against Yale in November made the SportsCenter Top 10 in his third straight game with a goal.

His play then went viral, thanks to an Instagram post by Justin Bieber calling Hutsko “the truth.”

Like Hutsko, the Terriers forward also notched a season-high two goals in the Battle of Comm. Ave., adding to his season total of 14. The senior then notched a late goal to send the Terriers into overtime against then-No. 12 UMass Lowell. Curry is a versatile player who can hammer a shot in from anywhere on the ice. He has been a force to be reckoned with on the ice all season, and it’ll be a tough challenge for the Eagles to control his offensive power.

The first-year goaltender for the Eagles has yet to miss a game, and his presence in the net has been essential to BC’s success. His 580 saves so far this season—including a single-game season-high of 39 against Colgate—are an impressive clip for a freshman. The 13th overall pick in the 2019 NHL Draft has recorded five shutouts, an impressive clip, especially for a freshman.