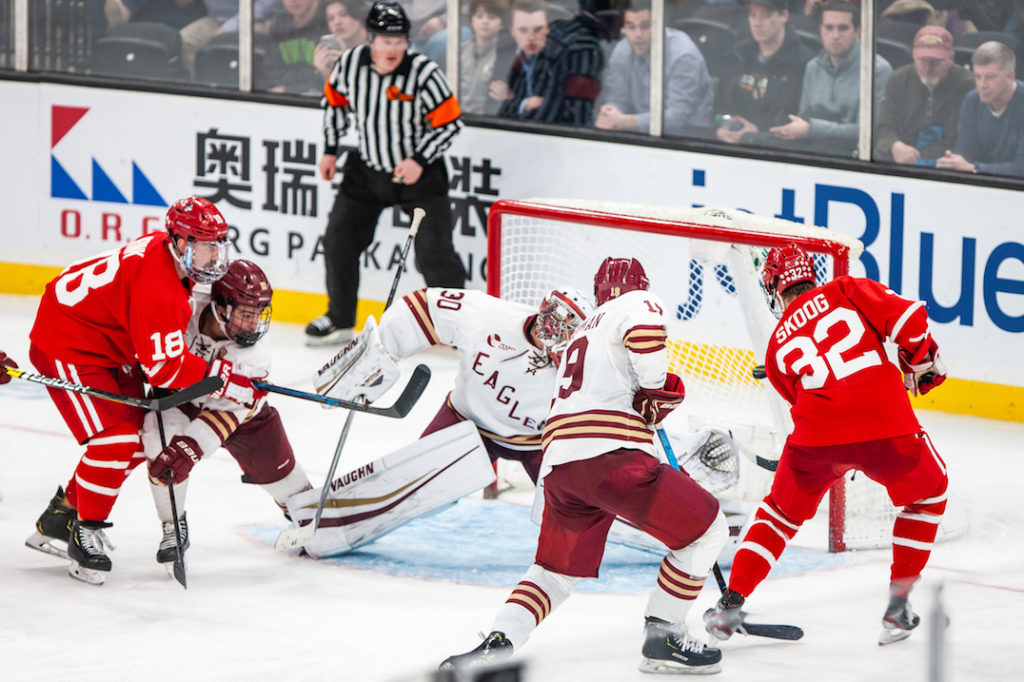 With Boston College men’s hockey up 3-1 over Boston University midway the third period, it looked as though the Eagles would easily secure the first-round victory and move on to meet Northeastern in the finals for the second year in a row. But after struggling to score for the majority of the game, the Terriers quickly eliminated the Eagles’ lead via two goals within the span of a minute, making the outcome of the game anything but certain.

After an earthquake-inducing contest in Conte Forum last month, it was safe to say that the latest rendition of the Battle of Comm. Ave. would be nothing short of electric. BC recently defeated the Terriers in a nail-biting 4-3 win, but one win does not decide a series. And despite a promising start for the Eagles in the first round of the Beanpot tournament, BU secured the win in double overtime, 5-4.

A relatively slow start to the first round didn’t prevent BC from quickly gaining control. After two minutes of play in the first period, the Eagles found themselves with the upper hand in the offensive zone. Marc McLaughlin carried the puck behind the BU net before sending a backhand pass to Patrick Giles. The sophomore winger collected the puck and easily beat goalie Ashton Abel, who had expected McLaughlin to go for the wraparound goal.

The Terriers were the first team to take a penalty, with David Farrance going to the box for a tripping call, and it only took the Eagles 12 seconds to capitalize on their man advantage. BC boxed the Terriers into the zone, with the top power play unit searching for the best point of entry. Matt Boldy received the puck along the far right boards, holding it for a moment before passing it to Alex Newhook. Upon securing the pass, Newhook rushed the net and lifted the puck just over Abel.

In typical BU fashion, the Terriers would not roll over and allow the Eagles to take an easy win. BC picked up its first penalty of the game, with Logan Hutsko going to the box on a high sticking call. With BU dominating the power play, Farrance shot the puck from the blue line to Logan Cockerill, who then passed the puck through the crease and a sliding Connor Moore to land safely on Curry’s stick. Curry continued to skate backward to the corner of the crease and lifted the puck over the pads of Spencer Knight.

Both Knight and Abel continued to show off their respective defensive prowess at each end of the ice into the second period. As the skaters on each team fought for opportunities to score and secure the win, the goaltenders denied them, often making incredible and seemingly impossible stops.

And just when it looked as though the game would head into the intermission after a quiet period, Jesper Mattila fought for the puck along the back boards and sent the puck out in front of the BU net. Julius Mattila made an initial pass on the puck, but only moved it within reach of Cotton. As he fell to the ice, Cotton weakly shot the puck—which deflected off Alex Vlasic, sending it trickling past the goal line and putting the Eagles up 3-1.

While the game itself seemed to calm down in the third, the Terriers’ offense was heating up. With the clock running out on a BU penalty, Luke McInnis was called for interference. The Terriers immediately capitalized on the Eagles’ disadvantage, with Farrance netting the goal past Knight. Quickly after, Patrick Harper scored the equalizing goal on the power play. And with 1:42 to play in the game, the Terriers took their first lead as Robert Mastrosimone found the back of the net off a cross-crease pass from Trevor Zegras.

The Eagles needed to work hard to keep themselves in the game. They had allowed three unanswered goals in the back half of the third period, and they had to pick up the pace. Just under 20 seconds later, Curry headed to the box on a hooking call, allowing the Eagles to take a man advantage for the remainder of regulation. BC pulled Knight for the extra man, moving to six-on-four play.

With less than a minute on the clock,  Cotton netted a goal—forcing overtime.

After the initial five minutes of extra time, the game still remained tied, forcing a 20-minute double overtime. Per NCAA rules, the game will officially count as a tie, as the two teams were still knotted up at 4-4 after 65 minutes of play.

Despite the efforts of Knight to keep the puck out of the net, Wilmer Skoog secured the win for the Terriers. Alex Brink made an initial shot on net, and the puck bounced off Knight’s pads and onto the stick of Skoog before he could halt the rebound.

BC will now face off against Harvard next week in the Beanpot consolation game, while BU will move on to play Northeastern in the championship.

Olivia Charbonneau is the associate sports editor for The Heights. She is unfortunately bad at game pigeon games, cannot pick a favorite hockey team to save her life, and maintains the position that coffee just tastes like dirt water. You can follow her dog on instagram @sebsgoldenlife and her on twitter @oliviacharb.