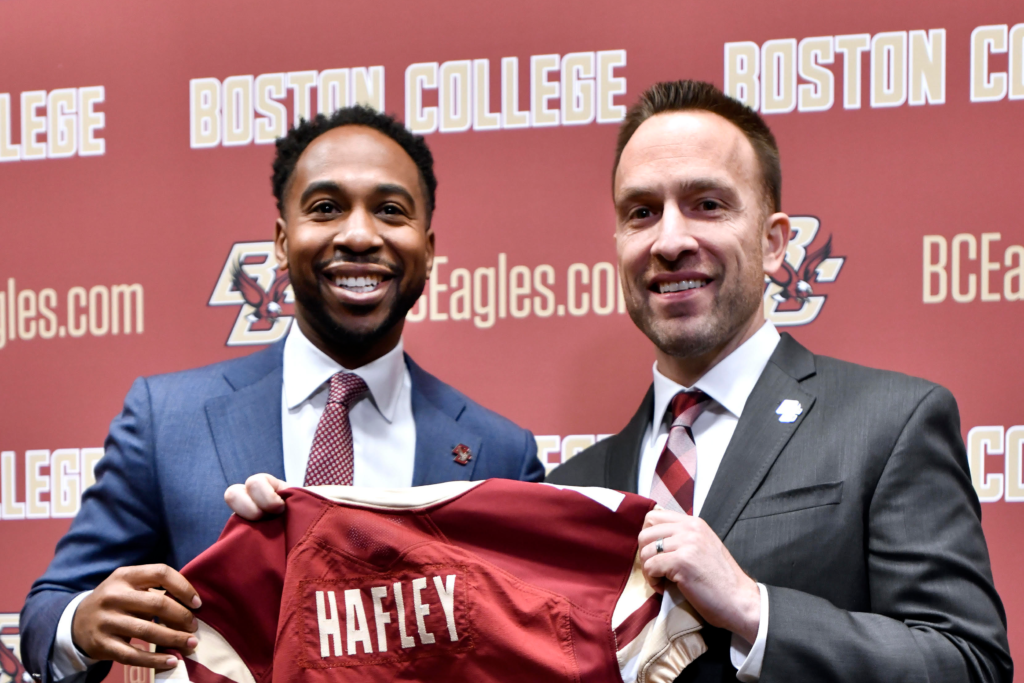 Hafley’s Focus on Social Media Is Making Waves for BC

There was a time when Boston College was at the forefront of college football’s social media arms race. In 2013, Steve Addazio took to Vine to post seven videos, including the now-famous “Guys Being Dudes” clip. The video went viral, drawing over 30 million views, and earned the program plaudits from national journalists for its innovative use of social media.

Despite Addazio’s success early in his tenure at using social media to market the program, BC football’s online presence has been behind the times. Last season, the team’s Instagram account celebrated the new recruiting class by posting cartoon mock-ups of the new players, followed by clips of their high school highlights. As other schools were creating complex graphics packages for their new signees, it seemed as though the Eagles just threw together a cartoon and some Hudl tape. Addazio’s online presence was also limited and mainly consisted of reposting images from the team account on Instagram.

Jeff Hafley has already begun to run the program differently than Addazio did, and the changes in his program’s social media usage has fulfilled a piece of that commitment. BC football’s social media presence has improved markedly since Hafley’s arrival on the Heights. Whereas the team’s accounts were fairly quiet at this time last offseason, followers of the team’s Instagram account have been treated to daily videos of the team going through winter workouts. The clips are highly edited and overlaid with motivational text, similar to workout videos posted by top football programs such as Clemson, and are a far cry from the unedited practice footage that adorned BC’s accounts last season. BC Athletics has even created a TikTok account, and the football team is frequently featured.

Hafley too uses his accounts more actively and passionately than Addazio, frequently tweeting about recruiting and celebrating the accomplishments of other BC teams.

“Coach Hafley and his staff have been awesome to work with and allowing our communications and creative content team tremendous access to the team, which allows for better content,” Jason Baum, BC football’s sports information director, said in an email to The Heights.

Many people, college football coaches included, love to rag on technology and social media. Last season, Northwestern head coach Pat Fitzgerald blamed declining attendance at Northwestern football games on cell phones. Still, social media is one of the most critical elements of the college football world. College football has always been an arms race, with programs endlessly requiring more money, recruits, coaches, and facilities. As schools seek to out-graphic each other in an effort to reach fans and recruits, Twitter and Instagram have become some of the most important battlegrounds.

Nowhere is the importance of social media more clear than at Clemson. The university’s director of new and creative media, Jonathan Gantt, described the school’s social media presence when he was hired in 2013 as “basic.” Now, the school employs three full-time graphic designers and a dozen or more students to create content for the university’s sports teams.

Clemson’s dominance on the field has established it as one of the most prominent college football teams, but its success at marketing that dominance, which social media plays a large part in, has made the team one of college football’s biggest brands. In a sport where recruiting is king, that brand is everything.

Hafley’s efforts to open up access and bring more attention to the program are not just limited to social media. BC recently announced that its football program will adopt an open locker room policy, meaning that media members can access the locker room after games. While prevalent in professional leagues, this level of access is very uncommon in college football.

The open locker room policy is a smart decision as it will make it easier for reporters to cover the program. Given BC’s secondary status in the Boston sports landscape, anything that makes covering the Eagles more attractive is a good idea.

Increasing the exposure of the football program is particularly important for BC given the school’s geographic limitations. The relative lack of high school football talent in Massachusetts and New England means that BC has to recruit on a national level. BC needs a strong brand to gain that national recognition, and an effective social media presence is going to be a critical piece of that effort.