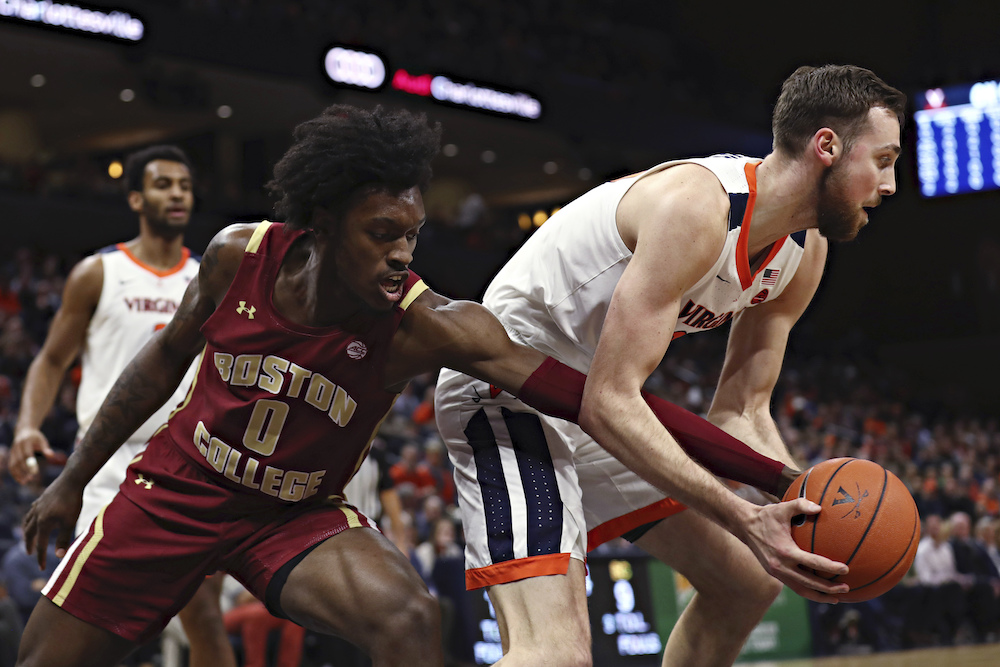 In an attempt to sweep the season series, Boston College men’s basketball looked to recreate its January matchup against ACC rival Virginia. A win on Wednesday night would register four road wins in ACC play for the first time since the 2008-2009 season. But after an injured Derryck Thornton was benched for the night and the Eagles had a sloppy defensive performance, BC fell to the defending national champions 65-78, splitting the season series.

Within seconds of the tip, the Cavaliers were on the board. Jay Huff took control of the ball immediately after the initial whistle, and before BC’s defense knew what to do, he had secured two points for Virginia. The Eagles attempted to catch up, but two consecutive 3-pointers gave Virginia some breathing room. The consecutive shots forced head coach Jim Christian to call his first time out exactly three minutes into the game.

In an attempt to stop the early bleeding, Jairus Hamilton secured a 3-pointer of his own, but UVA’s Kihei Clark was right there to regain the lead for the Cavaliers. But after unanswered shots by Jared Hamilton, Kamari Williams, and Nick Popovic, the Eagles quickly snapped their seven-point deficit to take their first lead of the night.

They didn’t have their lead for long, however. The Cavaliers capitalized on three minutes without a point from BC to muster up four-point lead midway through the half.

In over five minutes without a whistle, both teams were taking advantage of their time with the ball. Jay Heath delivered three points to close in on Virginia, but it was clear that both teams were in need of the media timeout.

After 12 minutes in the first half, a foul on UVA’s Braxton Key called an end to the marathon of play and was the first of the foul game. The Eagles couldn’t connect on the opportunity, however, and continued to trail behind the Cavaliers.

Despite the setback, BC remained just a shot behind the defending national champions, who boast the best scoring defense in the country. But after not scoring for over five minutes, the Eagles were struggling to find good looks at the basket, a trend that has haunted BC throughout the season.

The Eagles began to falter as the first half wound down. While only being called for one foul during the entire half, the Cavaliers easily wove through BC’s defense. Two 3-pointers—one each by Huff and Tomas Woldetensae—extended Virginia’s lead to 12. Suddenly, a game that looked within reach for the Eagles ran away from them in the closing minutes of the first, giving them a serious challenge to open the second half.

The Eagles attempted to make moves early, with Heath taking a shot less than 10 seconds into the half, but after Hamilton was whistled for a foul, the Cavaliers were able to extend their lead. BC continued to struggle with its perimeter defense, which allowed Virginia to gain a double-digit lead.

Popovic was able to cut the lead with a 3-pointer, but Woldetensae was there to respond with one of his own, denying BC the momentum to close the gap. The Eagles’ offense was getting into gear after the first few minutes of the half, but Virginia was able to walk right through the defense and secure its own points to maintain a lead.

Three straight BC fouls put the team in hot water and made the Eagles unable to close in on Virginia’s lead after cutting the deficit to six. Six unanswered points from Key forced another timeout from BC, who needed 30 seconds to regroup. Hamilton came out of the timeout with a 3-pointer, but BC’s defense wasn’t enough to stop the Cavaliers, who ducked around the Eagles’ defenders to get to the basket.

The Eagles looked to get a break when Casey Morssell rolled his ankle, giving BC the opportunity to play five-on-four, but Virginia’s defense held fast, denying BC the chance to close in on the Cavaliers. With five minutes left, the Eagles were in deep water. Clark and Key secured Virginia’s biggest lead at 17 points, forcing BC’s third time out. The extra 30 seconds didn’t prove helpful, as Kody Stattmann exploded through BC’s defense for another 3-pointer.

The Eagles were able to cut Virginia’s lead once again with eight unanswered points, but they weren’t able to come back in the final minutes, eventually falling by 13 points.

With a loss on Wednesday, it will take a miraculous end of the regular season and a triumphant ACC tourney run to secure a vaunted spot in March Madness, but after all, stranger things have happened.