Home » BC Drops Regular-Season Finale to Florida State in Blowout 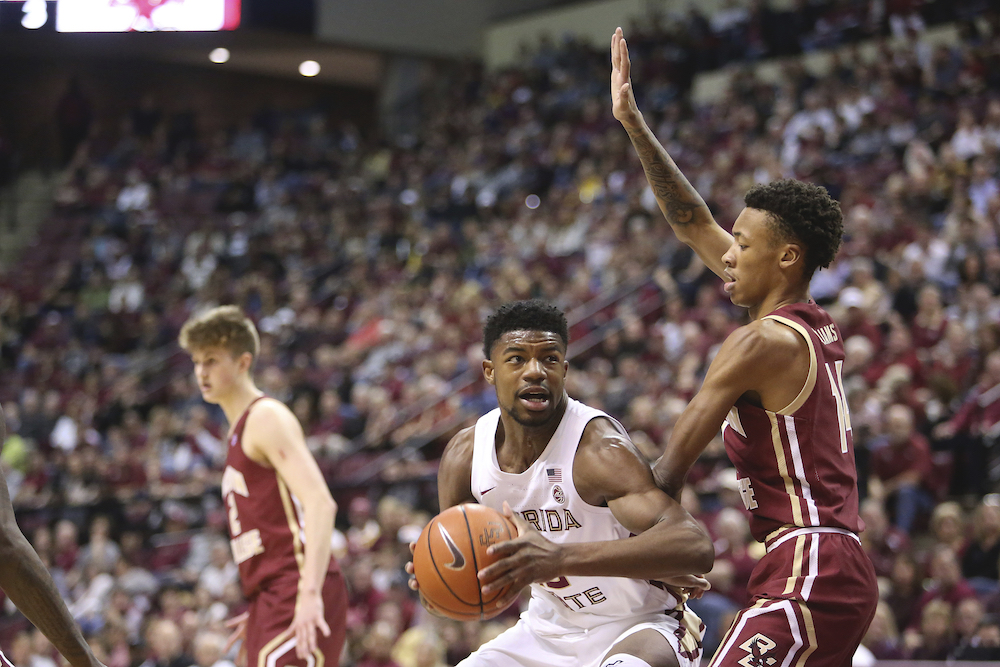 BC Drops Regular-Season Finale to Florida State in Blowout

Sam Holtze, a sophomore for Boston College men’s basketball, has seen the court for just a bit over four minutes in his career at BC. But as the clock began to wind down in the Eagles’ regular season finale against national No. 7 Florida State (26-5, 16-4 Atlantic Coast), Holtze had his time to shine. CJ Felder dished the ball to Holtze, who took a jumper from behind the arc which curved elegantly toward the ceiling and rattled through the rim for his first collegiate points.

Unfortunately for BC (13-8, 7-13), Holtze’s shining bucket was too little too late, as the Eagles still found themselves down by 18 with 20 seconds on the game clock. BC had spent the game at a deficit, including being down by double digits for the entire second half of play, so Holtze’s shot was a bit of a last-ditch effort for the Eagles.

BC dropped its final regular-season game of the 2019-20 campaign to the Seminoles 80-62, and though three players scored in the double digits, the Eagles’ offensive attack seemed to be missing for most of the night.

The most glaring difference between the two teams was FSU’s unanswered runs. The Seminoles opened the game with six straight points, as BC couldn’t get the ball to fall on its end of the court. Coupled with a turnover from Derryck Thornton and some missed free throws, BC was off to a rocky start early on, so head coach Jim Christian took his first timeout just two minutes into the contest.

BC scored its first point of the game after the timeout on a free throw by Jay Heath, which began the Eagles’ steady climb back into contention. Heath’s 3-pointer brought the Eagles within one at 8-9, but that was as close as the score would get.

FSU stormed back into the lead, capping a 7-0 run later in the contest with a thunderous fastbreak dunk from Patrick Williams to bring the score to 22-11 and give FSU its largest lead up to that point. And it was only up from there.

After some brief back and forth in the score, FSU kept climbing the ladder, leaving BC largely in its wake. A 3-pointer by FSU’s Anthony Polite with 50 seconds left in the first half gave the Seminoles an 18-point lead heading into the locker room, and it wasn’t looking good for the underdogs.

Heath was the first Eagle on the board in the second half, and once again his point came from a make on one of his two foul shots to open the half. He finished the night as one of three Eagles in double digits with 12 points. Steffon Mitchell also added 12 of his own, while Derryck Thornton led BC with 13 points on three makes from downtown. Mitchell was just one rebound shy of a double-double, as he led the team in that category with nine.

Despite Mitchell’s effort under the rim, the Seminoles won the battle of the boards, out rebounding the Eagles 45-36.

The Seminoles looked as though they would run away with the contest from the start of the second half, though neither team shot very well in that time frame. FSU took its largest lead of  the night at 23 with 18 minutes left as BC opened the period by going 1-of-7 from the field.

The Eagles ended up shooting a dismal 33.3 percent from the floor and 27.3 percent from distance, while the Seminoles hit on 42.5 percent and 19.2 percent in those same categories, respectively.

FSU locked down the paint all night on both ends of the court, scoring 46 points on close-range shots and limiting the Eagles to just 19 in the paint.

Interestingly enough, though FSU outscored BC 42-24 in the first half, the teams went point-for-point in the second, each notching 38 points. But Christian’s squad couldn’t make up for a blowout first half, and it dropped its fifth straight game to end the regular season.