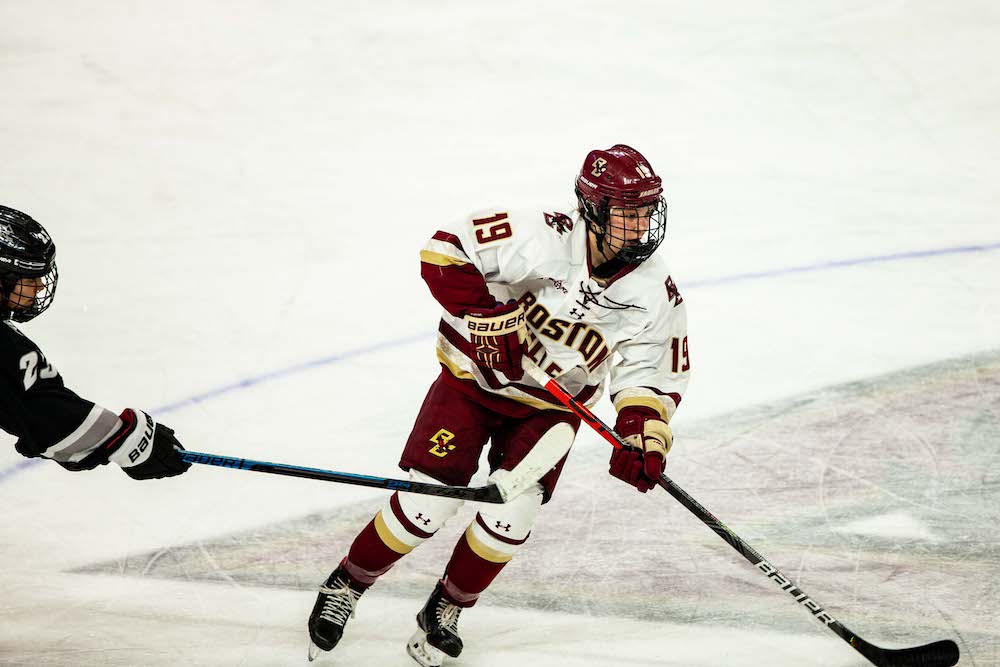 Hannah Bilka’s consistent chart-topping performance for Boston College women’s hockey recently earned her the 2019-2020 National Rookie of the Year Award, per the Women’s Hockey Commissioners Association. The award is voted on by each program in the NCAA’s Division I.

Bilka seemed to be the linchpin in the Eagles’ offense, as BC went 8-0-1 in games where she scored at least one goal and 14-4-3 when she notched at least one point. And it comes as no surprise that she was essential to the BC machine, as she led the Eagles—not just the rookies—in scoring with 37 points on 14 goals and 23 assists. In fact, her efforts earned her a spot in the top-10 most Hockey East points by a rookie of all time.

The Coppell, Texas native found her footing right away with the Eagles and recorded a nine-game point streak from Sept. 28 to Nov. 2, the first nine games of the season. From there, she recorded 10 multi-point games, three multi-goal games, and five multi-assist games.

In just the third game of the season—a 3-1 win over Merrimack and the start of Bilka’s nine-game hot streak—she recorded two assists, one to Hadley Hartmetz and one to Olivia Finocchiaro. Not much later, on Oct. 3, Bilka put up a standout performance in BC’s decisive 6-0 win over Holy Cross. Not only did she score her first career goal just 15 minutes into the first period, but she made sure to make it memorable by tacking on three more scores by the end of the game.