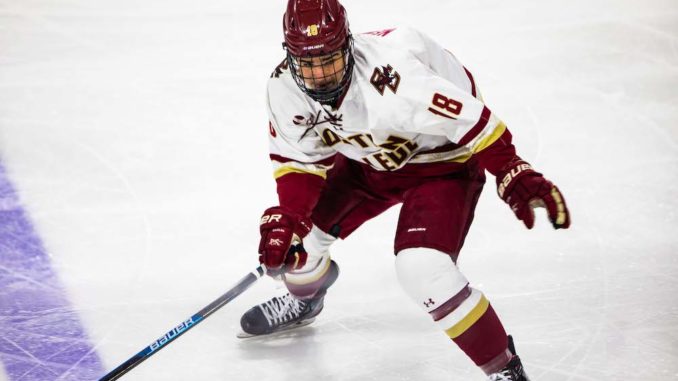 The award—also known as the Tim Taylor Award since its inception in 2007—is presented annually to the NCAA Division I player determined by the Hockey Commissioners’ Association to be the best first-year player in the country.

Newhook is a familiar face to BC fans after just one year on the Heights, as he made a name for himself from the get-go. In addition to being named the National Rookie of the Year by Hockey Commissioners’ Association this year—the first ever Eagle to do so—Newhook was the ninth-ever Eagle named the Hockey East Rookie of the Year. He was also named to the Hockey East Second Team and the conference All-Rookie Team.

Newhook’s accolades are the cherry on top of a freshman season for the ages. The St. John’s, Newfoundland native led all NCAA Division I first-year players with 19 goals, four game-winning goals, and three shorthanded goals.

Time after time, Newhook came up with big-time goals in even bigger-time games, including—but not limited to—the Eagles’ second goal over Boston University in the first round of the Beanpot earlier this year.

He and Julius Mattila tied for a team-leading 42 points—Newhook had 19 goals and 23 assists, while Mattila notched 10 goals and 32 assists—making for a dynamic freshman and senior forward duo.

Newhook skated his way to one of the most decorated freshman seasons in recent memory. It’s been three years since another BC rookie tallied 40 points in a single season—Colin White was the last to do so in 2016—and Newhook was the 12th player under the age of 20 in the last decade to hit that mark.

Newhook recently announced his plans to return to BC for his sophomore season despite his eligibility in the NHL after being drafted 16th overall last year by the Colorado Avalanche. BC fans have the chance to see another season of unbelievable goals and top-notch celebrations.

Will Life at Boston College Resume in the Fall? Four Factors to Watch
Räsänen Forgoes Senior Season, Signs in Finland