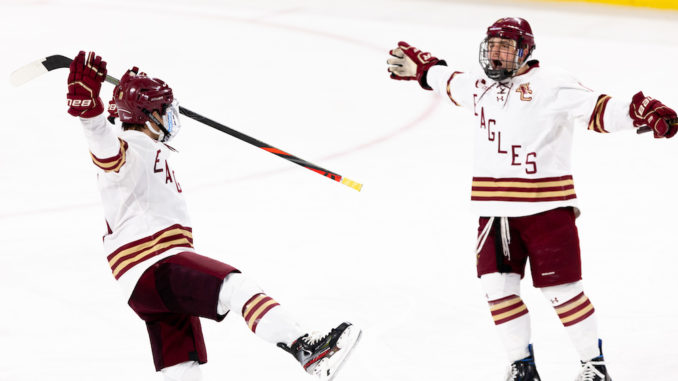 No one could’ve predicted how the 2019-20 season ended for Boston College men’s hockey. The team was flying high—maybe even the highest of any team in the country—but it came to a screeching halt with the cancellation of its postseason.

Left with no hockey to cover, two leading college hockey outlets turned to the magic of modern technology: a simulated NCAA hockey tournament. Complete with all the thrills and chills of college hockey in March, the results tell two very different stories.

The first, from College Hockey News, tells the story that BC fans across the country wish was true. No. 2 seed BC made its way out of the Albany regional for a trip to the Frozen Four, and after some thrilling contests in overtime, the Eagles came out with the National Championship trophy hoisted high over their heads.

The second, from the U.S. College Hockey Organization, saw BC to a crushing 4-2 defeat in the Frozen Four against lower-ranked Minnesota State. Once again, even fictionally, BC returns to Chestnut Hill for another year without a National Championship.

Here’s how the Eagles got there:

Alexa, play “Sweet Victory” at full volume. It’s time to celebrate. The Eagles avenged an early-season weekend sweep by Denver in possibly the most satisfying way. Facing off against the team that handed BC its first two losses of the year, the Eagles came out firing on all cylinders for a thrilling double-overtime win in Detroit.

It was David Cotton who was the hero in this matchup, as the senior capped off his collegiate career with the game-winning goal: a diving attempt right through the pads of Denver goaltender Magnus Chrona. Logan Hutsko’s shot ricocheted off Chrona’s pads, setting up Cotton to send the crowd into a frenzy.

But as is the case with many high-stakes matchups for BC, victory didn’t always look so near at hand. Bobby Brink gave the Pioneers the lead just 34 seconds into the game, and it stayed that way for a while. Whether it was a defensive miscommunication or a stellar offensive maneuver is unclear, but for the rest of the period, it looked like that would be the nail in BC’s coffin.

That is, until Hutsko stepped in on a second-period power play. Tied at one apiece, the teams traded goals to even it up at two before a scoreless third period sent BC to a familiar foe: overtime. Up until this simulation, BC struggled in OT all year, giving up two OT losses to Maine and one oh-so-painful one to Boston University in the Beanpot. But something about this simulation was different, and Jerry York and the Eagles got their first taste of national triumph since 2012.

Year after year, North Dakota and BC are two of the biggest names in college hockey, and this year was no different. The Fighting Hawks found themselves atop the national rankings seven different times this year, and BC was a consistent top-five contender. The two teams even met in back-to-back national championships back in 2000 and 2001, splitting the wins at one apiece.

It was a story of freshmen for the Eagles in the first part of the game, as Mike Hardman opened the scoring for BC in the first period, and Spencer Knight held down the fort in the second despite some heavy pressure from North Dakota.

Julius Mattila later put away the go-ahead goal on some fancy stick work, and Zach Walker tallied his first goal with a rebound off his leg to secure the win for BC.

BC took down the Big Red in an upset of sorts, as Cornell has been a defensive powerhouse all season long. A 4-3 scoreline was unexpected, as only one other team this season put up more than three goals against the Big Red. College Hockey News chalks it up to the fact that BC simply had more offensive chances than Cornell typically allows, and goals from Drew Helleson and Aapeli Räsänen, along with two from Hutsko sent BC to its 26th Frozen Four appearance.

The dice seemed to be rolling BC’s favor all tournament long, as a thrilling overtime win over Ohio State kept BC from being utterly embarrassed by a loss in the first round. Once again, David Cotton was the hero of the night, as his back-door tap-in from Hutsko was all it took to keep BC’s hopes alive. The three other goals came from Graham McPhee, Jack McBain, and Hardman.

But BC’s penalty kill unit seemed to be off its game, handing OSU two of its three goals on the power play. For a team that finished the regular season ranked No. 29 in penalty kill percentage, it was a surprising turn of events.

Unfortunately for Eagles fans, the USCHO’s algorithm wasn’t working in BC’s favor, despite the Eagles’ No. 2 seed. After Minnesota State went up 2-0 early on, hope looked fleeting for BC. Julius Mattila brought the Eagles back within one soon after, but the Mavericks never trailed in the contest.

An empty netter sealed the deal for Minnesota State, and BC went packing, left defeated for another year.

If there’s any upside to the two different simulations, it’s that BC took down Cornell in both. The two teams jockeyed for position in the national rankings all year, and though they never faced off in person—until the simulations of course—it seemed Cornell and BC were in somewhat of a grudge match. BC came away with a comeback win over the No. 1 seed on three straight goals from Alex Newhook, Matt Boldy, and Räsänen.

It was the Spencer Knight show in the first round of the USCHO simulation, as it was the freshman netminder who pushed BC over the edge to outlast No. 3 Bemidji State. Just like in the College Hockey News simulation, Cotton was the hero of Game One as his shot opened the scoring for the Eagles.

Hardman then deflected Ben Finkelstein’s shot behind Bemidji State netminder Zach Driscoll early in the second period. The Beavers then made a push to retaliate, but Knight was there all night long to send the Eagles to the second round.

iEdit: Rhind Revels in the Rock Genre
AJ Dillon Ignores the Noise, Focuses on Self Ahead of NFL Draft