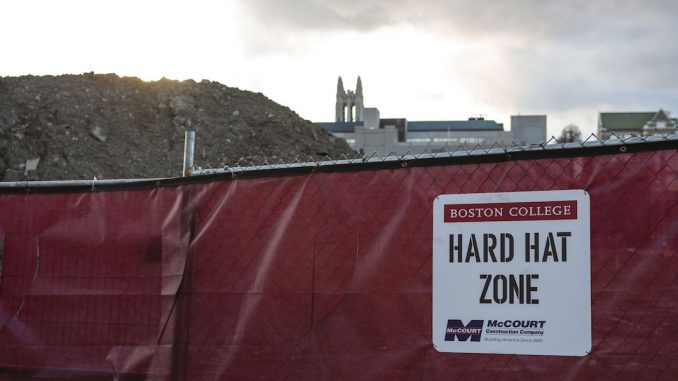 Boston College’s major construction projects are all currently under active construction, as the City of Boston begins a phased reopening of construction. Construction has resumed for Phase II of the Harrington Athletics Center, the only project within Boston city limits that had to shut down due to coronavirus restrictions. The University has implemented measures to mitigate the spread of the coronavirus during construction work, according to Vice President of Facilities Management Dan Bourque.

“They were doing temperature checks in the morning, [and] people would attest that they did not have any of the symptoms,” Bourque said. “It was socially distanced as much as practical, and they would wear face masks as needed. And they installed additional hand washing stations, and we did additional cleaning.”

Other major ongoing projects at BC include construction of the Schiller Institute for Integrated Science and Society, a steam line under Gasson Quad, restoration of the Bapst Library, construction on the former site of the Flynn Recreation Complex, and renovations in Rubenstein Hall.

Phase II of the Harrington Center—which will be named the Pete Frates Center after the former BC baseball player and ALS advocate who died in December—is scheduled for completion in late September. Construction was originally slated to finish this summer.

Bourque said that the Schiller Institute is scheduled for completion in December 2021, and construction on the building has been ongoing throughout the COVID-19 pandemic. BC is in the process of erecting structural steel for the building, and Bourque estimates that 60 percent of the structural steel erection has been completed.

The construction work on the Bapst Library, which was first built in 1928, is focused on restoration and preservation of the building, particularly on limestone that has degraded over the years. In addition to replacing some of the limestone, BC is also repointing some of the joints between the limestone, puddingstone, and granite stone; replacing clay tile on the roof; and cutting and repainting stonework in the main stair tower.

The Bapst Library will remain open while construction continues through the late fall, according to Bourque.

BC is also renovating kitchens and bathrooms in Tower D of Rubenstein Hall, the last of the residence hall’s four towers to receive this renovation, Bourque said. Rubenstein will also have 16 new beds once construction is completed in August, as new rooms will fill spaces in the building that were recently vacated by the maintenance crew.
Construction on the lot where the Flynn Recreation Complex used to stand is scheduled to be completed in July. The site will have one tennis court, three basketball courts, and more parking spaces.