Home » Protestors Gather in Franklin in Solidarity With George Floyd 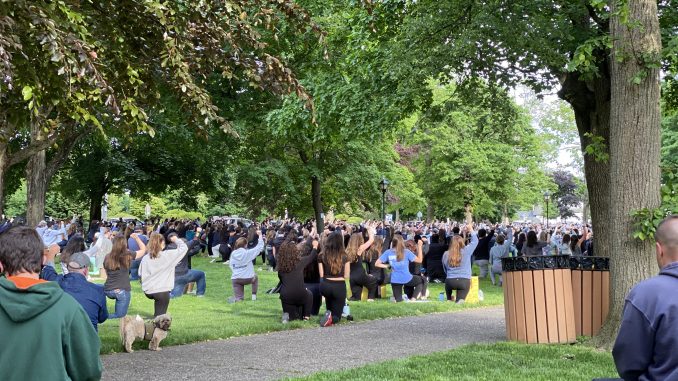 Protestors Gather in Franklin in Solidarity With George Floyd

For nine minutes, the length of time Minneapolis police officer Derek Chauvin kneeled on the neck of George Floyd, protestors kneeled in Franklin Commons in solidarity with Floyd and the movement currently shaking the country. On Tuesday evening from 6:30 to 8 p.m., the park was filled with supporters raising fists, and signs reading “Say their names,” “Black Lives Matter,” and “How many more?” were held high in the air for passersby to see.

“This is not an us-against-the-law-enforcement fight or a black-people-against-white-people fight or even a Democrat versus Republican fight,” said Kianna Thomas, a Franklin High School student, during the demonstration. “This is a fight against racial injustice. This is a fight to end systematic oppression that has been cast upon minorities since the time we set our foot on U.S. soil, when we were announced as thugs, savage, and the aggressors.”

Thomas, alongside two other guest speakers, stood in a gazebo in the center of the park and spoke of her own experiences as a Black girl. In her speech, she called for unity among those affected and for allyship rather than a division between races.

“This is a time when we as a community and a country need to come together in tranquil unity and point the finger at the justice system rather than each other,” Thomas said. “I use my voice because I’m sick and tired of living every day knowing that my brother and dad have a target on their back instigated by the melanin on their skin.”

Darley Desamot, a professional wrestler originally from Walpole, Mass., discussed the importance of understanding the difference between the phrases “Black Lives Matter” and “All Lives Matter.”

“Say you have a lot of different homes in one neighborhood, with different groups of people in each house,” Desamot said. “Well within this one neighborhood there’s one house that is consistently on fire. There is no way all lives can matter if we don’t all try to put that one house on fire out.”

Desamot acknowledged that while the end goal is for the statement of “All Lives Matter” to be true, it is not one that accurately portrays the issue at hand.

Ndoumbe Ndoye, the president of Franklin High School’s Diversity Awareness Club, spoke of her own experiences as a young girl trying to fit into a predominantly white community and the lengths she went to in an attempt to look like everyone else.

Ndoye continued, saying that she went as far as ordering a skin bleaching product on Amazon before reading on social media that the products are bad for people’s skin.

“Aside from that, we’re all here today because of George Floyd,” Ndoye said. “An officer put a knee on that man’s neck for nine minutes. … I’m going to be real with you, when I was [kneeling] on that floor, that hurt. My back, my knees, my arm was hurting when my fist was up in the air, but it was worth it. Nobody should deserve that.”

Ndoye repeated similar sentiments as Thomas, expressing the need for justice and reform across the country.