The year 2020 has created somewhat of a pipeline directly from Ohio State football to Boston College, first in the form of head coach Jeff Hafley, followed by special teams coordinator Matt Thurin. Now, the most recent Buckeye-turned-Eagle—redshirt sophomore wide receiver Jaelen Gill—has been granted immediate eligibility for the 2020 season.

Gill transferred to the Heights with nine appearances—including six receptions for 51 yards—under his belt with the Buckeyes. But in an online media conference on Wednesday, Gill said he was in search of a bigger role on his team.

“I’d be struggling for the starting spot. I’d be a little bit down in the depth chart,” Gill said about his future, had he stayed at Ohio State. “I talked to my family… so we just felt it was the best opportunity to leave and come here where I’ll have a better opportunity.”

Gill is a versatile receiver—he said he’s capable at wide out, in the slot, out of the backfield, and at split end—but he is relatively new to the position. Recruited out of high school as a running back, Gill is a multi-dimensional offensive weapon. He said he felt he needed to find a school where he could showcase all of his talents to their full extent.

“Wherever coaches need me to be, I’ll play,” he said.

Though Gill said he was in conversation with rival ACC schools including North Carolina and Pittsburgh while he was in the transfer portal, it was ultimately his relationships from Ohio State that drew him to BC. Since he was already familiar with Hafley, he said he anticipated a smoother transition.

Gill also noted that his conversations with Hafley were centered around Hafley’s promise to “take care of” Gill, which the receiver said was most appealing to him. That sentiment is familiar to many BC fans, as Hafley has previously noted his care for and personal connection with potential recruits out of high school.

“Going to a new school, you don’t know exactly what you’re getting into,” Gill said. “It’s a whole new set of coaches, and coming here I felt really comfortable just from my previous relationship with Coach Hafley.”

Although BC stuck out over other schools he spoke with about transferring, the decision to leave Ohio State was not an easy one to make. Back in 2017, Gill announced his commitment to play for the Buckeyes after growing up a lifelong fan. The Westerville, Ohio native said that he had dedicated his commitment to his grandfather, who passed away in 2016.

“He meant the world to me, and if you know how close I was with him, when he passed, it hurt me and I was down for a really long time,” Gill said in a 2017 interview with Eleven Warriors. “In my last moments with him, I told him where I was going to school.”

The journey to Boston is doubly tough for the Ohio native, who spent his first two years of college just 15 minutes from his parents’ house. Add on to that the fact that he’s leaving home in the middle of a pandemic, and it creates a recipe for uncertainty.

But Gill said the reliability of daily practice and a group of inclusive teammates have been instrumental in creating a smooth transition to the Heights.

Though rumors are swirling about the ACC limiting competition to only within the conference, the fall football season is currently scheduled to happen as planned, and Gill said he’s looking forward to getting back on the field.

“Right now, I’m just ready to get to work and win some games with my new teammates and coaches,” he said.

transfer Jaelen Gill
BC Confirms Tuition Increase, Plans to be Flexible with Fall Academic Calendar
BC Alumni Discuss Resilience and Adversity in ‘Show @ 6’ 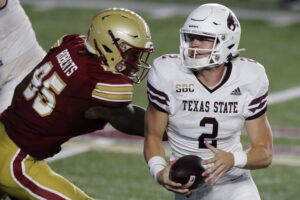