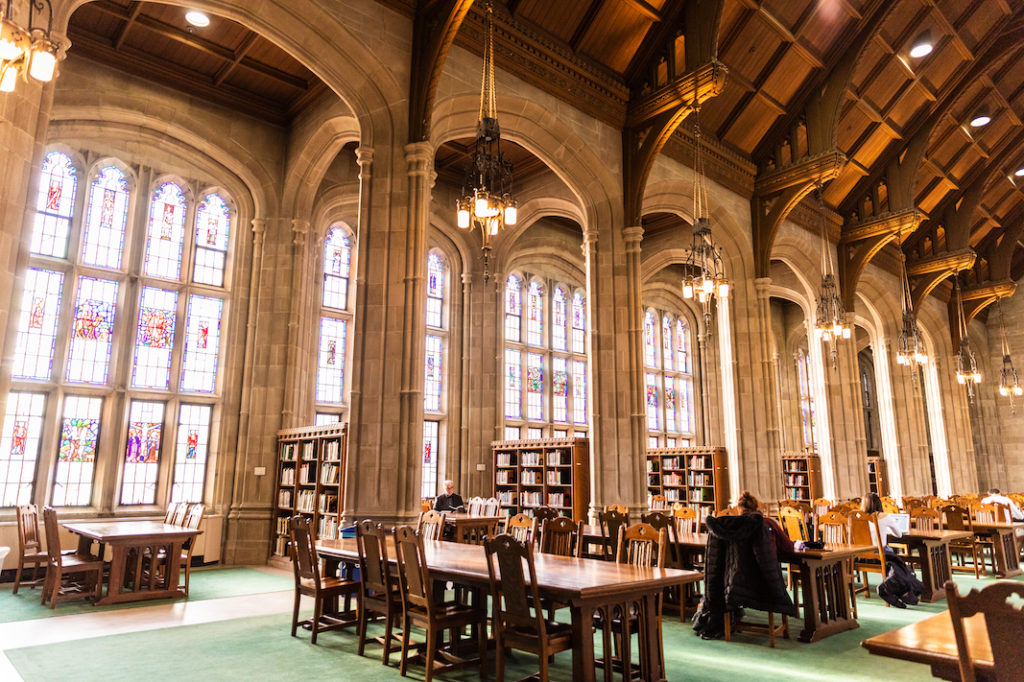 Sixty Percent of Courses to be Offered in Person this Fall

Roughly 60 percent of courses will be offered in person on Boston College’s campus this fall, according to a letter sent to the University community on Monday. The letter also provided a timeline of the move-in process and an update on how Massachusetts’ mandatory quarantine order will impact some of those coming to campus for move-in.

Parents, guardians, and family members traveling from higher-risk states can meet the “transitory travel” exemption of the order if they drop off their students and immediately leave campus and the state. Anyone who stays overnight is not exempt and must either quarantine for 14 days or receive a negative test result within 72 hours of entering the state.

Director of University Health Services Douglas Comeau said at a webinar on Tuesday that BC would not make an official statement on whether those who are dropping off students should get tested before coming to campus. But he said they should not freely travel the city if they are not exempt from the order.

“If you come the day before, and you’re in a hotel, just quarantine in that hotel. … Tell your parents, you have to get room service for the night, and it’s great,” he said.

The University will still test all students regardless of the state they are traveling from, Comeau said at the webinar. The virtual event, hosted by the Undergraduate Government of Boston College and Division of Student Affairs, was the first in a six-segment series intended to provide students with more information about the fall.

The mandatory quarantine order, which went into effect Aug. 1, says that individuals arriving in Massachusetts who were not tested within 72 hours prior to arrival can break quarantine temporarily to be tested at a site within the Commonwealth, but they must resume quarantining until they receive a test result. There are 23 testing sites in Boston, all of which offer free tests, though results may take a few days, depending on testing volume.

Test results will be available in six to 26 hours, according to Monday’s letter, which was signed by Provost and Dean of Faculties David Quigley, Executive Vice President Michael Lochead, and Vice President for Student Affairs Joy Moore.

Comeau said at the webinar that students in housing without private restrooms will be allowed to access them and they may leave their rooms to retrieve food, but should practice social distancing while doing so. He said that even after students receive their own test results, they should continue to practice appropriate distancing and wear masks until all their roommates also receive results.

“We really want everyone to wear their mask and maintain social distancing and quarantine as much as possible to your room while you await the testing results,” Comeau said.

The University is developing an app with CoVerified, a campus COVID-19 platform developed by MIT and Harvard, to allow community members to schedule testing appointments, monitor symptoms, and access test results throughout the semester. The app will be made available between Aug. 12 and 15, according to the letter.

UHS will be divided into two offices—one for COVID-19 screening, and another for UHS’ normal services, according to Comeau. Walk-in appointments will no longer be offered, but students will still be able to schedule same-day appointments.

Throughout the semester, students, faculty, and staff with high-contact positions will be tested randomly. The University will also conduct randomized testing of students based on specific categories, such as residence halls, Comeau said.

A cross-University team has updated classroom reassignments in order to allow for physical distancing, according to the letter. The University will be using non-traditional locations, including Walsh Hall and the Yawkey Athletics Center, as classroom spaces.

Some online courses will be synchronous, meaning that classes will have regular meeting times. Others will be asynchronous, meaning that classes will not meet regularly but will have scheduled assignments and deadlines. Some online synchronous courses will be held outside traditional teaching hours, either in the early morning or late evening, in order to accommodate international students unable to return to the country.

Most in-person classes will meet in full-sized, de-densified classrooms, while others will be offered in a hybrid format in which half of the students will be in the classroom on a rotating basis. All class descriptions have now been updated to reflect their modalities, according to an email Student Services sent to students on Friday.

Instructors of hybrid courses will notify students of in-person attendance policies before the start of classes, according to the letter.

The letter also reiterated BC’s policies regarding classroom safety and hygiene. It instructed students and faculty not to alter room configurations, which are being rearranged before the start. The University will be cleaning classrooms each night and providing sanitizing wipes for disinfecting chairs and writing surfaces.

The administrators’ letter said that students must remain seated at all times during class sessions unless they need to exit the room, and that all students and instructors should move quickly through halls and stairwells without congregating. It also repeated that everyone must wear masks when inside BC buildings and outside when they cannot consistently stay 6 feet apart from others.

Students will not be permitted to move into their residence hall until they have been tested, the letter said.

ResLife will be assigning students specific locations to park in once they arrive on campus, the letter said. The letter reminded students that they should aim to move in within 60 to 90 minutes and will only be allowed one guest to help them move in.

For students who are assigned parking spots at their residence halls, guests can begin unloading their vehicles while students are being tested. Students who are assigned parking spots elsewhere must return from testing before their guests can proceed to the residence halls for unloading. Students using ride-share services can leave their belongings at their designated cart check-out location while getting tested.

The letter said that vehicles should be moved away from residence halls once a student’s items are inside, but parking will be available in various locations and garages across campus. It asked that those helping students leave campus as soon as possible.

Everyone coming to campus must wear a mask at all times, including in residence hall rooms, the letter said.