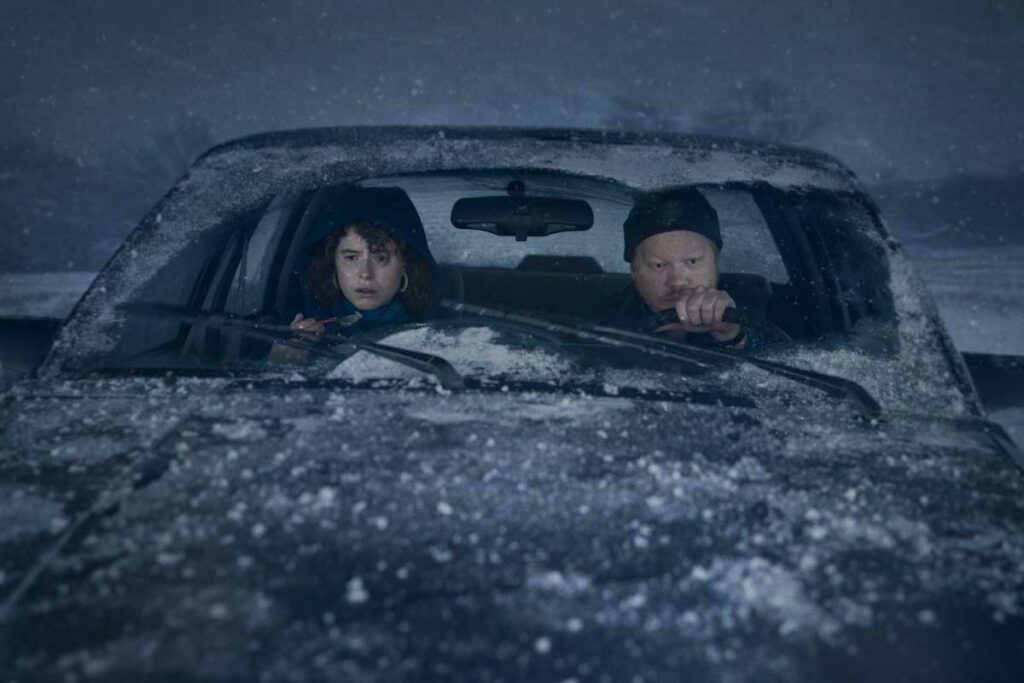 It’s obvious that Charlie Kauffman is obsessed with relationships. Whether it’s those that tie us romantically or by kin, every one of his films seems to tackle large themes involving human companionship. I’m Thinking of Ending Things analyzes these personal relationships while throwing a bunch more Kauffman-eque themes—aging, identity, memory—into the stew. The result is a film that essentially plays as several different short films bound together, as it relies on several lengthy, real-time dialogue scenes. Some speak honestly, analyzing various conundrums present in life from a near philosophical perspective. Others simply make no sense at all. The result is a messy and confusing look at romance, or the lack thereof.

Adapted from a novel written by Iain Reid and released through Netflix in early September, I’m Thinking of Ending Things is the first feature film written and directed by Kauffman since 2015’s Anomalisa. The movie surrounds a failing relationship between two characters, Jake (Jesse Plemmons) and an unnamed young woman (Jessie Buckley) who travel to visit Jake’s parents at their farm in Oklahoma. As they drive through blizzard conditions, the film’s tone mirrors the dim and gloomy sky that covers every inch of land with snow.

Besides an initial voice-over monologue, the first 25 minutes of the film follows these two characters as they talk during the car ride, jumping from philosophical topic to philosophical topic. When it comes down to it, more than half of the film involves these two characters simply sitting in the front seats driving and talking. Right away, viewers can get a sense if this movie is for them or not.

The second act brings us to Jake’s childhood home, where we meet his parents, whose utter abnormalities make them feel like figments of one’s imagination rather than actual people. Played by David Thewils and Toni Collette, both parents seem to have personalities that mold and shift every second. Kauffman also has them constantly change age throughout the visit. The father goes from a bumbling senior with clear mental fog in one scene to a vibrant, middle-aged man in the next. All in all, nothing can be taken at complete face value. Everything in this film has a deeper, symbolic meaning.

The central problem with I’m Thinking of Ending Things is that these deeper meanings seem nearly impossible to actually understand to anyone besides Kauffman himself. Constant monologues given by characters about identity, love, and art seem like direct channels into Kauffman’s speaking voice. It’s as if Kauffman gives a vague, three-minute commencement address 10 different times through the movie. Unlike Tarantino in Inglourious Basterds, who uses his directorial voice to emphasize how King Kong is a metaphor for the Transatlantic slave trade, Kauffman’s speaking voice is a combination of rambling, arguing, and posing interesting questions while providing no answers. After a while, the exercise becomes quite tiresome.

In the last couple years, Netflix has been ready to finance artists and commit to whatever creative decisions they make for their films. The final 15 minutes of the movie really leave a sour taste in one’s mouth. Whether done purposefully or not, Kauffman’s creative vision is striking, although certainly not something that will be universally lauded.

While both Plemmons and Buckley give strong performances, and editor Robert Frazen does some fantastic work behind the scenes, the film is a frustrating watch, essentially treading water in a whole lot of psychological nothingness. While Eternal Sunshine of the Spotless Mind’s complexities spark curiosity and cause viewers to lean in for answers, I’m Thinking of Ending Things causes viewers to rebuff what it claims to be saying, rejecting the movie as a whole.