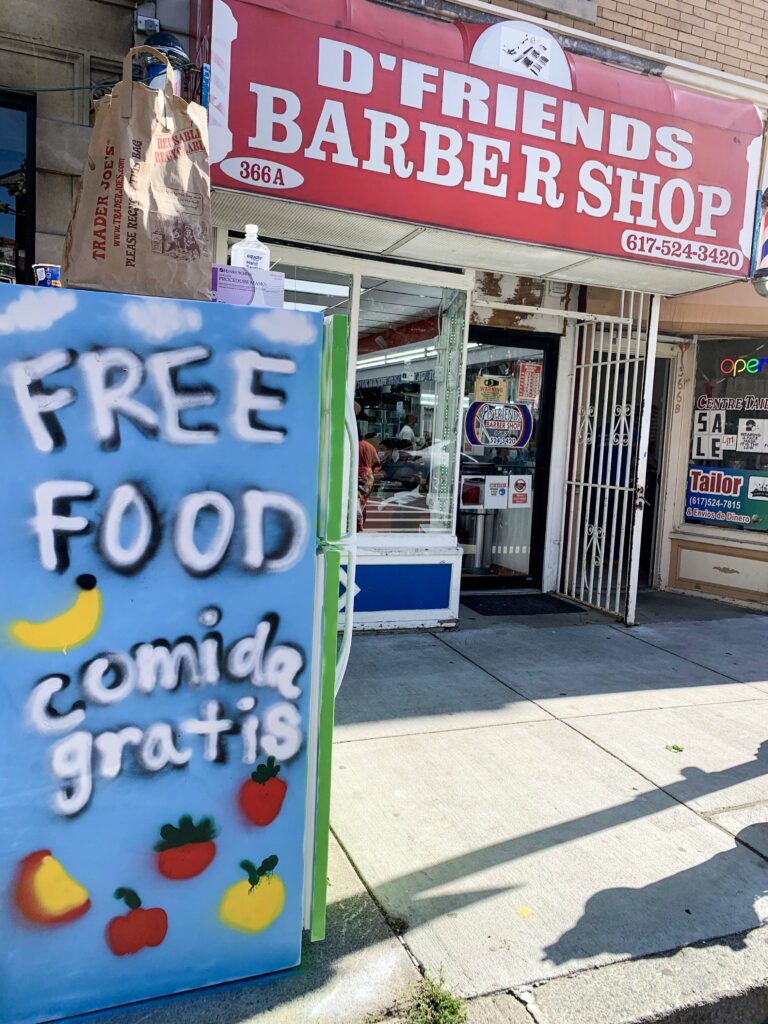 A welcoming, brightly painted refrigerator labeled “Free Food” can be found on the sidewalk outside of D’Friends Barber Shop in Jamaica Plain. The first Boston community fridge, which opened on Sept. 4 is for everyone and anyone—anyone can take food from the fridge, and anyone can leave food when they are able. Community is the driving principle of the fridge, as it is the result of the work of dozens of organizers and volunteers in the area.

After being inspired by community refrigerators in the New York City area, Josiel Gonzalez reached out to NYC organizers on Instagram for advice on how to start a similar project in Boston. Another woman named Veronica Bettio also got involved with organizing the Boston fridge.

After a week of organizing, they had amassed a group of about 30 to 40 volunteers from around Greater Boston. Gonzalez estimates there are now probably around 100 people in their organizing group chat, and they now have four to five different group chats that correspond to different neighborhoods in Boston so they can organize more effectively.

Gonzalez praised the owner of the barber shop in Jamaica Plain for his generosity.

“And our host said, ‘Listen, as long as you take care of the fridge, you don’t have to pay me for powering the fridge. The barbershop will pay for it,’ which is so awesome,” Gonzalez said.

The now brightly colored fridge was donated by Gonzalez’s mom, and one of their volunteers painted the fridge.

“It’s interesting now that we’re kind of the first fridge in Boston, a lot of people are coming to us and kind of picking our brains,” Gonzalez said. “And it’s awesome, because our goal is to have as many up in the city as possible”

The Boston community fridges are expanding beyond Jamaica Plain, with another fridge opening in Dorchester on Tuesday. There are also plans in the works to open fridges in Somerville, Cambridge, and Allston.

Gonzalez said that one of the best tools they have used in organizing is their Instagram, @bostoncommunityfridge.

“We had a post up on Instagram, like, ‘Hey, we could use some water bottles or some granola bars if possible,’” Gonzalez said. “And literally within like 30 minutes, someone from the neighborhood dropped by a case of waters and granola bars. So yeah, so it’s really been showing us just the power in numbers. It’s showing us the willingness of people, there are people out there that are really willing to help and they just might need a text, you know.”

The team of volunteers has bonded as a group, Gonzalez said.

“So the best part about what’s going on right now is that it doesn’t really feel like all of us are doing heavy lifting,” Gonzalez said. “We’re literally leaning on one another, and really just using each other as a reference and learning from each other. So it’s been really cool so far in that respect.”

Several local businesses have donated to the fridge, Gonzalez said. Some of the volunteers work at Allandale Farm and the farm now donates to the fridge every Friday. When Pigs Fly Bread donated about 60 to 70 loaves of bread during the fridge’s first week of being open. Gonzalez said that this helped him and the other organizers realize that they want to focus on getting donations that eliminate food waste.

“The number one goal is to try to eliminate food waste as well,” he said. “So if we could get donations from restaurants and bakeries and farms and gardens, like that’s kind of the most ideal for us. And these people would otherwise throw that food out anyways, it goes to waste so we’re like, ‘No, you can give that to us and we could hopefully give this away for free and give people a chance to eat it.’”

For those interested in contributing to the Boston community fridge, Gonzalez said that even sharing their posts on social media is a big help. People can also donate their skills and time—he is working with a graphic designer to make a flyer explaining how to contribute to the project. Another way to help is helping the organizers make connections with restaurant owners who would potentially donate food.

“You know, we would definitely like it to be from them before taking food from civilians, but it’s been actually really really cool to see the community members themselves like go stop by the fridge after they grocery shop and add some stuff in there,” Gonzalez said. “So that’s been really really cool as well. So, so far we’ve had a pretty balanced donation base, I’d say I’d say a lot of it does come from the community but a lot of it also comes from bakeries or gardens or local businesses.”

They’re also working on a way to collect monetary donations, possibly through a Venmo or Cash App account.

“We do find that a lot of people do genuinely want to help,” Gonzalez said. “And some of them might not have a car, you know, like it’s really just about helping in whatever capacity you can, and really putting it out there that anyone can help if they want to help.”