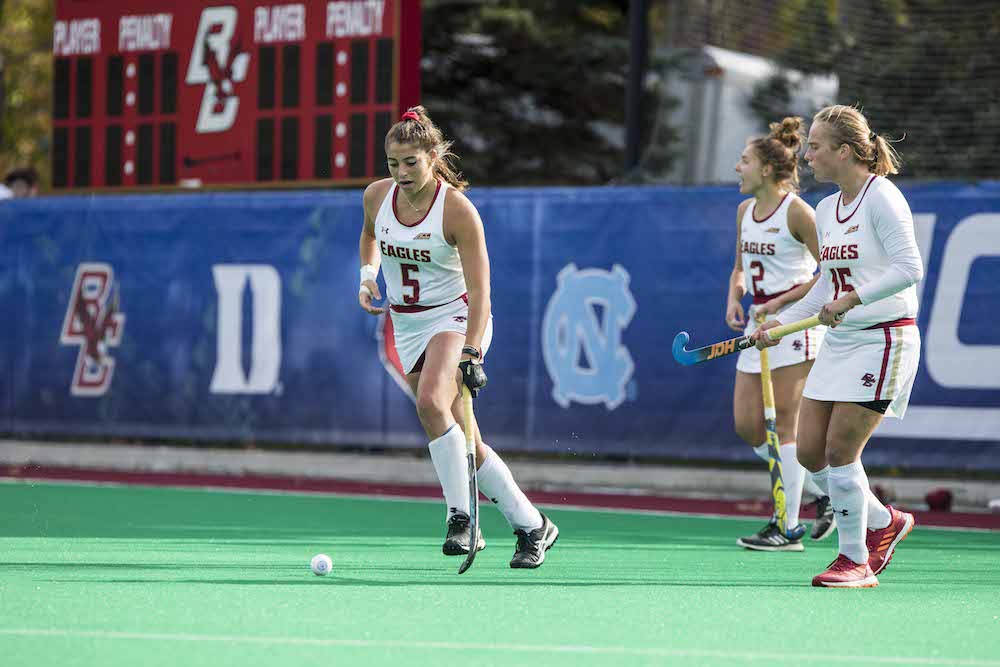 When Boston College field hockey arrived in Louisville, it had been 328 days since the Eagles last took the field.

For the first time since their heartbreaking loss in the Final Four of the National Tournament against North Carolina, the Eagles (0-1) finally returned to the competition pitch on Sunday. After a record-breaking season in which they made it to the ACC Tournament title game and the National Tournament semifinal, head coach Kelly Doton and her team had high expectations.

But even with a tournament run in the rearview mirror, the 2020 season did not start off as planned for the Eagles, who suffered a 2-1 defeat at the hands of Louisville (4-0). The Eagles’ rust from nearly a year of not playing showed, as their usually prolific attack was only able to generate one goal and only one other shot on target.

Louisville, on the other hand, was sharp the whole match. The Cardinals have now earned their fourth win of the season after beating Duke twice, followed by wins over ACC powerhouses North Carolina and BC to get off to an undefeated start.

One reason for BC’s lackluster season-opener was its late return to the field due to the COVID-19 pandemic. Many of the ACC teams had a nearly normal preseason—including summer workouts and training camp starting in June—while BC only started practicing in late August. To further complicate the season, other teams in the ACC had already been competing for three weeks before BC’s first game on Sunday.

The Cardinals came out strong in the first period, firing shot after shot on BC netminder Jonna Kennedy. After peppering Kennedy with chances, Louisville finally broke through on a corner just over 12 minutes into the game. The ball found the stick of Meghan Schneider, who fired it past Kennedy for her first goal of the season. Midfielder Mercedes Pastor earned credit for the assist. Even though the Eagles generated a scoring chance late in the frame—one of just two in the half—they found themselves down by one at the end of the first period.

Even though the Eagles return to Chestnut Hill with a loss, Kennedy was a bright spot for the team. In her first game as the new starting goalie after the graduation of last season’s starter, Sarah Dwyer, Kennedy looked extremely comfortable in the net. Her efforts in goal kept her team competitive in a game where they were outshot 19-4.

Kennedy came away from the game with nine saves, and Louisville goaltender Hollyn Barr recorded just one.

BC’s offense began to ramp up at the start of the second period, and the Eagles leveled the score with two minutes to go in the first half. After a Louisville defender deflected a cross into the box, the ball found BC forward Elizabeth Warner, who made a nice spin move in front of the net before slotting it into the goal to make the score 1-1. The Eagles remarkably found themselves tied at the break despite being outshot 10-2.

The Cardinals regained the momentum in the third period, and they had several chances to score. They retook the lead—this time, for good—while playing with a one-man advantage following a yellow card on BC defender Sky Caron. With one minute to go in the period, Charlie van Oirschot blasted a shot past Kennedy for her second goal of the season to give Louisville the 2-1 lead.

The final period was much less lopsided than the first three, and each team generated plenty of chances but couldn’t capitalize on any of them. Late in the final frame, BC players thought they had tied it up with a score off a penalty corner, but officials disallowed the goal due to a dangerous play. As a result, the score remained 2-1 as time expired, giving Louisville the home victory.

Despite the loss, the Eagles have lots to look back on in a positive light. Even though the team played catch up the whole game, the Eagles’ late start didn’t hinder them on the defensive side of the ball. Their offense did not create as many chances the prolific unit is used to, but the Kennedy-led defense kept the Eagles alive, holding a strong Louisville team to only two goals.

One early loss isn’t a deterrent for BC, as last year, the Eagles lost three of their first four and still made an historic postseason run. This is only the beginning.