Régine Michelle Jean-Charles, associate professor of French and African and African Diaspora Studies, told members of the Boston College community that it is necessary to say “Black Lives Matter” out loud.

“The refrain is a rallying cry, a communal response, a reflection, and an invitation,” she said. “…Black Lives Matter represents one of the most important utterances about the status of racial justice in the 21st century. It is a simple affirmation, whose necessity reveals the kind of world that we live in.”

BC faculty members spoke about Black Lives Matter, the importance of formative education, and the necessity of racial justice intervention at an event through the University’s newly established Forum on Racial Justice in America on Thursday.

The webinar, titled “BLM at BC: Formation and Racial Justice in Higher Education,” was moderated by Vincent Rougeau, director of the Forum and dean of BC Law. Rougeau began the event by asking the audience to ponder the word “formation” and the role that studying racial justice has in the formational aspect of education.

“[Formation] can be a useful term, if it means that a college proposes certain intellectual, social, moral, and spiritual standards to its students as worth acquiring and living by and equips them with the knowledge and skills to understand and critically interpret the world in light of these values, while also respecting their freedom to discern how these standards can be embodied in the decisions they make about their own laws,” Rougeau said.

Director of African and African Diaspora Studies and associate professor of sociology C. Shawn McGuffey spoke about how the Black Lives Matter movement gives people a lens to understand formation in various settings, including BC and other institutions of higher education. McGuffey also encouraged the audience to think about intervention.

“Intervention is important because it suggests that responding to and addressing harm is not good enough,” McGuffey said. “We must intervene to prevent the harm from actually happening in the first place. And while protest is certainly one form of intervention, there are many others.”

McGuffey said that the affirmation of all Black lives is central to understanding the Black Lives Matter movement and the importance of racial justice.

“Black Lives Matter is the affirmation of all Black lives, including but not limited to Blacks who are women, queer, trans, lacking from education, immigrant, poor, incarcerated, formerly incarcerated, non-Christian and yes, those who are ratchet as well,” he said.

One action BC has taken to incorporate affirmations and interventions in student formation is the inclusion of these themes in courses that satisfy the Core Curriculum, McGuffy said.

“The new core has a great potential to do so while providing an intervention that can help reduce harm to Black lives and affirm Black lives,” he said about the core classes educating the whole person—intellectually, socially, and morally.

McGuffey teaches From #BlackLivesMatter to #MeToo: Violence and Representation in the African Diaspora, a complex problems course, with Jean-Charles.

McGuffy said that BC still has many areas where it can improve its response to and understanding of racial justice in higher education, including the need to focus on the specificity of anti-Black racism.

“While there are certain overlaps, there are also vast differences,” he said. “Anti-Asian racism looks very different from anti-Black racism, which is also very different from anti-Indigenous racism. So, while coalitions are very important, we need to address all forms of racism. When we do not talk about and address the specificity of anti-Black racism, people of African descent will continue to be left behind.”

McGuffey also addressed teaching his class in the Yawkey Center.

“We have to think about the mental, emotional, and moral gymnastics that students and others in the BC community must maneuver as we try to teach, learn, and develop intervention strategies that will support the movement for Black lives, while trying to do that in a building named after someone that both those within and outside of the BC community have documented has practicing anti-Black racism,” he said.

The namesake of the Yawkey Center is former Red Sox manager Thomas Yawkey, who refused to recruit Black players to the Red Sox when Major League Baseball began to integrate in the 1950s. The University has faced backlash over not changing the Center’s name.

She also acknowledged that the phrase needs to be spoken aloud in the context of our country’s history and current political climate.

“Black Lives Matter should not be necessary to speak,” Jean-Charles said. “But given the continuous cycle of anti-Black violence, racist abuse, and the stronghold of white supremacy, we say it, we scream it, and we teach it over and over again.”

After discussing a trip she took with students to Paris in which several students witnessed an incident of police brutality, Jean-Charles reflected on her experience as an educator in and after the incident.

Jean-Charles finished by encouraging BC students to become more involved with and knowledgeable about movements such as Black Lives Matter, on campus and within the wider community.

Professor of history and African and African Diaspora Studies Martin Summers spoke about historical examples of racism in the United States and their relation to the country’s current political climate.

“Teaching about the structural nature of racism in American history is really central to what I perceive as my mission at the university,” Summers said. “And that is making students of all racial, ethnic, and class backgrounds aware of the ways that racism shapes nearly every institution in the United States, and how some are privileged by or benefit by it, even though they may not necessarily recognize it.”

He encouraged the audience to challenge accepted racist institutions and ideas.

“For me, in order to really make Black lives matter … those of us who are interested in racial justice have to push back ourselves against this conservative agenda and to do this is to challenge the notion of American conceptualism,” he said.

Summers said that he hopes history inspires agency in his students.

“It’s important to teach my students about agency,” he said. “That is agency of the oppressed … the resiliency of Black people, about how for Black people it’s constantly been a struggle to liberate ourselves. And in this sense, I teach history in a way, hopefully, that gives students a usable pass that they can use as a template, not for replicating, but rather for expanding.” 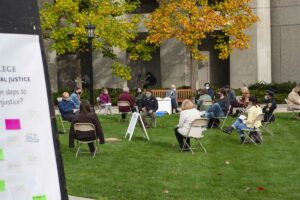