Home » Many Students Did Not Show Up for Mandatory Testing After Three-Day Weekend
News, On Campus, Top Story, Administration, Coronavirus Updates

Despite the University’s plans to test all undergraduates in the week following the Columbus Day holiday, not all students went in for testing that week.

BC reports on its COVID-19 dashboard that it conducted 8,171 undergraduate tests the week following Columbus Day, though approximately 8,600 students are back on campus this semester, according to Senior Associate Director of University Communications Ed Hayward.

Director of University Health Services Doug Comeau told The Heights on Oct. 15 that Boston College was testing all undergraduates following the holiday weekend.

Hayward told The Heights in an email that students with scheduling conflicts, who were not feeling well, or did not show up to be tested were invited to be tested the following week.

Last week, in a departure from the standard testing notification email from UHS, Comeau included a warning that testing is not optional and outlined the consequences of not completing a mandatory COVID-19 test.

When asked whether UHS added this reminder because students who were called in for tests were not going in to receive them, Hayward said that it is a standard reminder used at all schools.

BC reported in the Tuesday update of its dashboard that two undergraduates have tested positive for COVID-19 out of 1,624 tests this week, an undergraduate positivity rate of .12 percent.

Fifteen BC undergraduates tested positive last week out of 6,451 tests, putting the weekly undergraduate rate at .23 percent, down from .29 percent the week before.

boston college COVID-19
Fifty Years On, PULSE Confronts COVID-19 Without Missing a Beat
Hoeltgen: There is No Controversy in Appointing a Justice Before Nov. 3 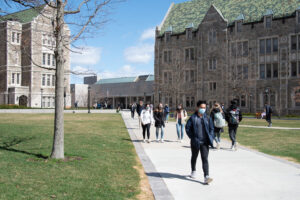