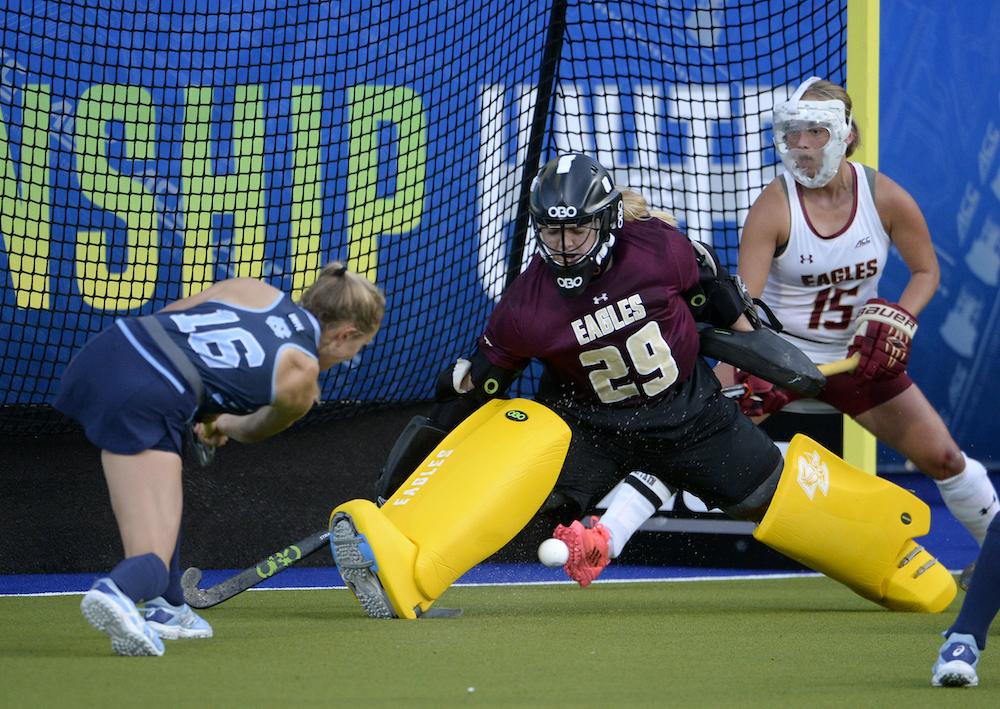 After only playing two regular-season games due to a team member testing positive for COVID-19, Boston College field hockey squared off against North Carolina in the quarterfinals of the ACC tournament on Thursday evening. Even without the lack of a regular season, this matchup was going to be tough for the Eagles (0-3), having lost every contest against the Tar Heels (8-1) during the 2019 season—including a heartbreaking defeat in the Final Four.

BC entered the tournament as the No. 7 seed after coming out of the regular season with a frustrating 0-2 record. The Tar Heels, on the other hand, managed to snag the No. 2 seed after only ceding one game to Louisville in early October.

The first quarter began poorly for the Eagles, who spent the majority of their start defending their own zone from the Tar Heels’ onslaught. In the eighth minute, UNC finally made it past Eagles’ goalkeeper Jonna Kennedy to take the first lead of the contest. Sophomore midfielder Paityn Wirth forced her way into the shooting circle, battling two Eagles defenders for possession.

Eventually Wirth regained solid control of the ball and shot the ball short side, beating Kennedy to the post and tallying the first point of the game. The on-field umpire originally called off the goal, assuming the ball had gone just wide of the net before he saw it clearly lodged in the back of the net and awarded UNC the goal.

Following Wirth’s goal, however, the tides looked as though they were beginning to turn in the Eagles’ favor. BC seemed to gain confidence as it took over possession from the Tar Heels and began to play more in the offensive zone. After being down 6-1 in shots after Wirth put UNC on the board, the Eagles kept the Tar Heels to only one shot as they attempted six of their own. And yet, BC was unable to capitalize on its few opportunities as the clock ran out on the first quarter.

When the teams returned to the field for the second frame, the Tar Heels were back in control of the game. It didn’t take long for UNC to add onto its lead. Only three minutes into the second quarter, the Tar Heels drew a penalty corner from the Eagles to give the tournament host a brief edge. Kennedy made a save on the initial shot but Wirth took advantage of an opening and knocked the ball past the Eagles’ goalkeeper.

Down by two goals, BC went into shutdown mode. While they continued to struggle getting past the Tar Heels’ defense, the Eagles managed to keep their own goal on lock for the remainder of the quarter. Even when a green card against Sky Caron forced BC into a shorthanded situation, the Eagles kept UNC from running up the score. With the final 90 seconds winding down before halftime, BC maintained possession of the ball but was still unable to convert and cut the Tar Heels’ lead in half.

When the beginning of the second half came around, the Eagles seemed to build n their momentum, getting a few more chances here and there but still not getting past UNC goalkeeper Amanda Hendry. BC picked up its second green card eight minutes into the frame as sophomore Lois Lekawael headed off the field for the two-minute penalty. Shorthanded for the second time, the Eagles once again proved they could defend against dominant teams—they just needed to get their offense on the same page.

Just when it looked as though the two teams would head into the final quarter after a scoreless third frame, sophomore Madison Orobono positioned herself in front of the net next to an unassuming Kennedy ready to receive a pass to increase the Tar Heels’ lead over BC. And receive a pass she did, chipping the ball into the back of the net as Kennedy dove to make the save, tallying her first career goal to put UNC up 3-0 heading into the fourth quarter.

With 15 minutes left to play, the Eagles had to put in the work. BC had spent 45 minutes unsuccessfully struggling to get through UNC’s defense, down 24-9 in total shots in the first three quarters. Kennedy’s strong efforts throughout the game kept the Eagles in it, preventing a humiliating blowout by the Tar Heels in what was beginning to look like BC’s last game of the season.

The Eagles had been able to shut down UNC star Erin Matson for the majority of the game. The junior forward led the Tar Heels with eight shots—five of which were on target—but was unable to find the back of the net for the first three quarters. As time wound down in the fourth quarter, Matson fired the ball past Kennedy off her own blocked shot that had been an attempted clear by Elizabeth Warner.

Even as the clock ran out on the final quarter, the Eagles kept pushing for that goal to prevent a shutout. In the final minute of the contest, Caron tallied her first shot on goal of the matchup but was unsuccessful in beating Hendry as BC lost its third straight game, 0-4.

After a full 60 minutes in net, Hendry was challenged by the Eagles only nine times, with the seasoned goalkeeper stopping each shot expertly. On the other end of the field, Kennedy had to put in work for the Eagles, facing 15 shots on net and stopping 11 of them, unable to shut down the motivated Tar Heels.

So while the Eagles are coming home from Chapel Hill after a disappointing three-game season, UNC will be advancing to the semifinals to try to take the ACC Championship title for the fourth straight year.