Boston College has named Glenn Gaudette the inaugural chair of its new engineering department, according to a Nov. 19 University release. Gaudette, who will officially begin his role on Jan. 1, currently serves as a professor of biomedical engineering at Worcester Polytechnic Institute. He has also been a pioneer in his research of treating cardiovascular diseases, being the first to use plants for heart regeneration.

In an interview with The Heights, Gaudette said that the goal of the engineering department will be to educate students who want to make the world a better place for others.

“[The engineering department] is going to be like nothing else that’s out there, but like something that’s desperately needed,” Gaudette said. “I look at it as an opportunity to train students in the technical depth and technical knowledge in engineering, but also taking advantage of everything else BC is doing phenomenally well right now in educating the entire person.”

BC officially announced its new engineering program in April of this year. The program will launch in fall 2021, coinciding with the completion of the Schiller Institute for Integrated Science and Society that December.

Above all else, Gaudette said he is looking forward to having the opportunity to meet BC’s students and form connections with them.

Gaudette said that the new engineering department will also be able to work alongside other academic departments within the University in order to produce important innovations that could improve people’s lives.

“There’s so many exciting opportunities at BC where students are interacting with other folks in different areas, whether that be social work or nursing,” Gaudette said. “And so how can we as engineers help them get the things that they need? How do we make lives better?”

The addition of the new department at BC will serve as a mutually beneficial relationship, Gaudette said. While the engineering program will make BC a better place, the BC community will give the new program an opportunity to flourish.

Gaudette praised BC for its call upon students to be “men and women for others,” and said that he hopes to integrate this mantra into the new department.

“I think that’s what our world needs today,” Gaudette said. “It needs people who care about others.” 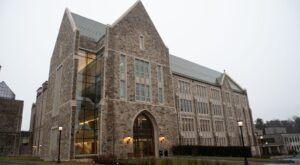