Despite bringing in 25 recruits during the early signing period in a class that ranked higher than any Boston College football haul under Steve Addazio, Jeff Hafley and his staff are still exploring every avenue to add more talent to the Eagles’ roster.

BC announced the addition of four transfer athletes to the program on Tuesday. All four athletes are enrolled at BC for the spring semester and will participate in spring practices.

Former Florida State defensive back Jaiden Lars-Woodbey, a near five-star recruit out of high school who played in 24 games across his three years in Tallahassee, headlines the group.

Lars-Woodbey totaled 106 tackles and nine passes defended during his time at FSU. His freshman season was particularly strong, as he notched 59 tackles, 4.5 tackles for loss, and seven passes defended on his way to being named an ESPN Freshman All-American.

“We had a bunch of guys on staff who knew him from recruiting him at other places and just, honestly, the recommendations and what people had to say about him on and off the field were through the roof, and that combined with his film, I’m really excited,” Hafley said during his press conference on Wednesday.

Lars-Woodbey is a redshirt junior and will have two years of eligibility on the Heights.

The Eagles also added a pair of defensive players from Temple, Director of Athletics Pat Kraft’s former jurisdiction. Redshirt junior defensive tackle Khris Banks and graduate linebacker Isaiah Graham-Mobley enrolled for this semester as well. Banks served as a backup on the interior of the Owls’ defensive line for the past two seasons, rotating in during 20 games across the two seasons and tallying 33 total tackles, 5.5 of which were tackles for loss.

The addition of Banks will aid the Eagles’ depth on the defensive line, particularly after the departure of starting defensive tackle Luc Bequette.

Graham-Mobley only played in two games during the 2020 season, as he suffered a season-ending injury in the second game of the year against UCF. He was a critical piece at the center of the Owls’ defense during the three prior seasons, totalling 132 tackles in that time.

Like Banks, Graham-Mobley fills a critical area of need for the Eagles after some key losses from BC’s defensive front seven of the 2020 season. Starting linebackers Isiah McDuffie and Max Richardson both declared for the NFL Draft.

The last of the four transfers is Gunner Daniel, a graduate long snapper out of Wagner College in Staten Island, N.Y.

Tuesday’s announcement is the latest example of BC’s utilization of transfers under Hafley. The Eagles brought in six transfers last offseason, and many of them played significant roles during the 2019 season. Phil Jurkovec started under center, and safety Deon Jones, defensive lineman Chibueze Onwuka, and Bequette all started on the defensive side of the ball.

Despite his success at landing elite transfers, Hafley said that he hopes the Eagles can shift away from using the transfer portal to this extent.

“We want to recruit high school players and develop them and grow with them and build a culture through them, and we want to be very selective with who we bring in in the portal,” Hafley said.

Hafley also mentioned at his press conference that 12 of the Eagles’ recruits from the 2021 signing class have enrolled early and will participate in spring practices.

One of those early enrollees is Drew Kendall, an offensive guard from Dedham and the top-ranked player from Massachusetts in the 2021 class.

“We need to keep the best players in the state home, and some people said we couldn’t do it, and we proved that we could,“ Hafley said in reference to Kendall. “I appreciate Drew for giving us the opportunity to recruit him and showing what we could offer, and I think it’s a sign … to the recruits in the 2022 and 2023 and 2024 [classes]—the local guys: the best kid in the state stayed home. … He had the courage to say, ‘I want to go to Boston College.’”

Jaiden Lars-woodbey Khris banks Isaiah Graham-mobley gunner daniel
In Response To: “‘Why Is It Only Our Floor?…Why Us?:’ Multicultural Learning Floor Vandalized Saturday Morning”
UGBC Discusses Vandalism on MLE Floor at Sunday Meeting 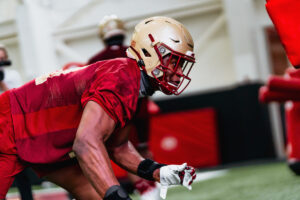