Inside the Lab: Processing COVID-19 Tests at BC

On March 11, 2020, Boston College closed its campus due to COVID-19. During the closure, the University established an on-campus laboratory to test for the virus. Nearly one year later, students test positive for the virus every day on campus, but the lab that discovers it is far from ordinary.

“From what I understand, a lot of other universities are actually envious of what we have because they don’t have the capacity to test on site and then they’re dependent on other providers,” Andrea Kirmaier, research assistant professor and the acting technical director of the on-campus lab, said. “Some states have turnaround times of days or even weeks, which is really bad for a college-community setting.”

The Boston College Microbiological Laboratory (BCML) processes the BC community’s COVID-19 tests. First certified in September, the lab now has the capacity to process 1,000 to 1,500 test samples daily, according to Welkin Johnson, chair of the biology department and head of the Johnson Lab.

The BCML, which is housed in the Johnson Lab, uses RT-PCR tests, which detect the presence of the SARS-CoV-2 virus with PCR testing instruments normally used to test for the seasonal flu virus, according to the Centers for Disease Control and Prevention.

The process for the on-campus lab begins in either the Margot Connell Recreation Center, University Health Services (UHS), or Conte Forum, where community members have their noses swabbed.

The tests are then picked up by graduate student runners, according to Johnson.

“What they do is, three times a day, they go on a run, where they stop at the rec center, at Athletics, and at University Health Services and they pick up the tubes with the swabs and transport them back to the lab,” he said.

There are three labs that are a part of the BCML. The first lab is where all the substances required for the PCR are mixed and added to plates, Johnson said. Later, in another lab, the DNA from the test sample will be added to this mix to create a complete reaction. Due to contamination issues that could lead to false positives, the patient test samples are never brought into the first lab.

“Meanwhile, in the 2nd lab, a buffer [a solution that is able to neutralize strong acids and bases and resist a pH change] is added to the patient swabs so that any virus present on the swab will diffuse into the buffer,” Johnson said in an email to The Heights.

According to Johnson, this part of the process takes the longest because someone needs to manually add the buffer to each testing sample.

The buffer is then transferred to new plates, and put into an extraction machine that extracts any viral nucleic acid present in the buffer, Johnson said.

“The actual extraction is an automated system, we load the sample and then it goes through extraction and clean up automatically and it spits out a plate that has extracted nucleic acid in it,” Kirmaier said.

The majority of the samples will not have anything in them, because all that was extracted during the extraction phase is the viral RNA that contains the SARS-CoV-2 virus, Johnson said.

“But …  if there was some virus in the nasal swab, then the genetic material will be stuck on the swab,” he said.

This process, according to Johnson, takes approximately 20 minutes. The extracted genetic material is then added to the PCR mix, and the samples are taken to a third lab, where the PCR machine is located.

The plates containing the final reaction of the PCR mix and the viral nucleic acid is combined with three other plates and loaded into a PCR machine, Johnson said.

The PCR machine amplifies the extracted viral RNA until it reaches a level where the genetic material can be detected, which takes about an hour.

A computer software then analyzes the sample to make a diagnostic call about whether the sample contains the virus.

“It’s basically a yes or no test,” Johnson said. “It’s either present or not. We don’t really quantify the virus.”

PCR tests are the most effective, Johnson said, because they can detect a lower virus amount than a rapid test. The lab’s use of PCR tests allows for positive individuals to get into isolation before they would be at the peak of virus levels.

In the last step, the test results are reported to UHS and updated to Medicat, the software that handles student health information. UHS is then responsible for reporting the information to the Massachusetts Department of Public Health (DPH), Johnson said.

Compared to the Broad Institute, the way that the BCML processes COVID-19 tests differs in important ways, according to Johnson.

While the Broad Institute can only guarantee that the tests will be processed in under 24 hours, the on-campus lab can process tests in three to five hours, Johnson said.

The Broad Institute is “high throughput” while the BC lab is “rapid turnaround,” he said, meaning that while the Broad Institute has the capacity to process more tests, the on-campus lab can process them with a much faster turnaround time, which is important for BC because earlier detection can help slow the spread of the virus on campus.

“The idea [for the on-campus lab] was to focus on symptomatic and contact tracing but we can also augment surveillance [testing],” Johnson said.

He also said that having an on-campus lab allows BC to test student-athletes before sporting events in which the athletes must provide a negative test in order to be eligible to play.

The Broad Institute, according to Johnson, mostly processes asymptomatic surveillance testing samples, but can change depending on the capabilities of each lab.

“The advantage of that is because RNA viruses have a high mutation rate, it’s always theoretically possible that a mutation in a gene could interfere with the ability to detect [the virus],” he said.

The Broad Institute, according to Johnson, only tests for the N gene when processing tests.

Johnson shared an example from November, in which one individual tested positive for two genes through the on-campus lab and not the other.

“They were what we call an ‘N gene drop-out,’” he said. “That’s somebody, for example, that the Broad might have missed but we picked it up because we’ve got at least two other genes that can pick it up.”

This is especially effective now, Johnson said, as the United Kingdom and South African variants of the virus are known to have mutations in the S gene. Since the on-campus lab tests for all three genes, the lab can still pick up the virus in the event that one gene is mutated and does not show up. This also allows the on-campus lab to track whether the new variants are present and report it to the DPH.

The trajectory of the lab this academic year has been a learning experience, Johnson said.

“There was a power outage last semester,” he said. “Suddenly, our computers and stuff didn’t work when the power came back, so we’ve installed uninterrupted power supplies on the major equipment so that won’t happen.”

Kirmaier said she is proud of how well the on-campus lab team came together, even in the face of many regulations and long work days.

“I’m really happy we can make a significant contribution to the BC community now,” she said. 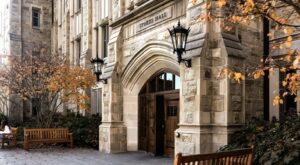 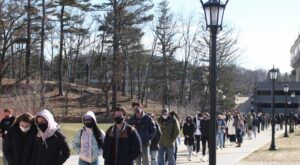 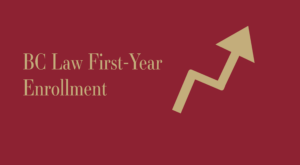